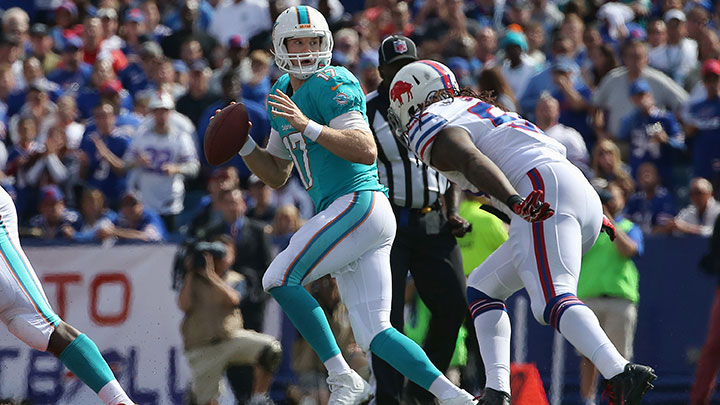 Let’s get to the Thursday-night propositions …

I know. This adjusted line play is a little bit of a cheat. But when you’re as far in the red as I am, drastic times call for a drastic repurposing of jermajesties. Normally I wouldn’t pick against the home team in a Thursday-night game — especially when that home team is seeking revenge after getting trounced by their opponent, 29-10, in Week 2. But the absence of Dolphins tackle Branden Albert is a glaring problem for the Miami offensive line. The Bills have a dominant defensive front, led by Marcell Dareus with 10 sacks. The team itself leads the league with 34 QB crushes. So look forward to the 2012 version of the Dolphins, featuring a very scared Ryan Tannehill running for his life. 20,000 jermajesties

Will there be a score in the first seven minutes of the game? YES (-130)

Somehow there has been zero scoring in the first quarter of two of the last three Thursday-night games. That’s very odd, considering the “over” is 24-7 in the 2014 night games. Don’t expect the dearth of scoring to continue, as the over has also cashed in eight of the last nine AFC East games the Bills have played on the road. An early Dan Carpenter chip shot against his old team gets the ball rolling. 2,000 jermajesties

The “first player to score” play yields worse odds than a three-card monte game in the Bronx. What do you say we channel our inner Arthur Avenue and beat down this prop once and for all? 1,000 jermajesties each

Which will happen first: the Raiders win a game or I watch a single frame of Donnie Wahlberg and Jenny McCarthy’s new reality show, Donnie Loves Jenny?

The truth is neither team is watchable at this point. Totally different story if Jenny ditches Donnie for Sebastian Janikowski — in which case I’m all in.

I’m taking the over and parlaying it with over 3,512 jealous/retaliatory nude pics posted by Chelsea Handler in that same span. Yes, this is about NFL gambling. I didn’t forget. 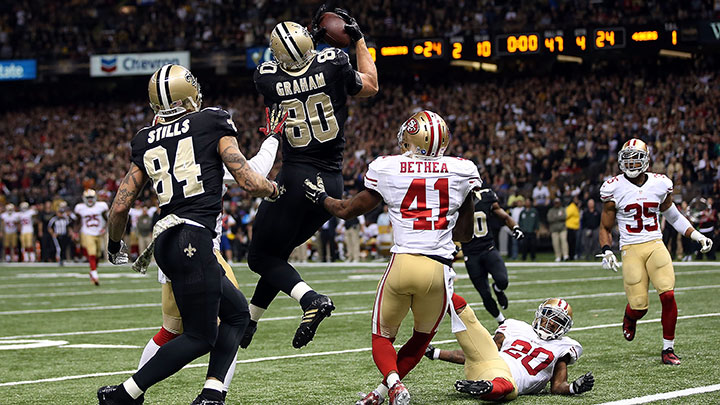 Over/under 750.5 gallons of water used to put out the fire engulfing Jimmy Graham’s pants after he claimed it was “definitely not a push-off” against 49ers cornerback Perrish Cox

For those of you living under a rock: The All-Pro tight end was flagged for a push-off after he caught what appeared to be the game-winning Hail Mary touchdown vs. San Francisco last Sunday. The 49ers went on to win that game in overtime. I’ve seen the replay a dozen times. He extended his arms and thrust Cox to the ground. Easy call. Clubber Lang has more of a claim that he didn’t shove Mick during his pre-fight tantrum in Rocky 3 that ultimately led to the legendary trainer’s demise. Jimmy Graham. Great player. Awful fibber.

Over/under 16.5 years before the Steelers are able to shake the stink that pop superstar/all-around brat Justin Bieber placed on them by attending the team’s Bible-study session on the eve of the Jets-Steelers game, which Pittsburgh lost 20-13

Sorry, Steelers fans. The Curse of the Bieberno is here to stay. Perhaps the only way to lift it is to sign Floyd Mayweather and Selena Gomez to the practice squad.

@TheCousinSal The only thing in history more wrong than your Thurs Night Prop Bets is the sale of Manhattan for $24. Have a good weekend bro

When you’re right, you’re right. You should’ve been shorting my selections months ago. Incidentally, I undoubtedly would’ve taken the 24 bucks and invested in the 17th-century equivalent of Beanie Babies.

Martin, I’m not exactly sure what day of the week you tweeted this — actually, I just realized it doesn’t matter. The answer is yes, I did lose money last night.

Ah, Kenneth, my fellow follower/followee. Not much I could’ve done about New Orleans, but I wish I had seen this ahead of time so I could’ve warned you of the hazards involved in betting the Steelers over the Jets, which ended up being the fixed spread of the 2014 NFL season. I can’t explain who fixed it or why — I just know it wasn’t kosher. It was an inexplicable lock, like when you know that you’re going to stain your clothes using mustard at a ballpark even though you’ve been very successful squirting ketchup. Actually, Kenny — two out of four on a parlay is impressive by my standards. As far as I’m concerned, when it comes to this gambling stuff, you have what it takes.

Over/under 109.5 Hollywood Boulevard pedestrians I approached, in my attempt to compliment people while shouting at them, who dismissed me as mentally challenged

I’ve come close, but not once in the last 12 years and over 150 Jimmy Kimmel Live hidden-camera shoots have I ever been slugged by a pissed-off pedestrian. Chased with a butter knife at a buffet when I cleared an obese man’s plate prematurely, yes — but never punched. I predict the next time I shout compliments will be the instant I ironically catch one in the mug. Which is good for me because, as you and every degenerate who reads this knows, I’m wrong about almost every prediction.

Check me out on SportsCenter, where I’m only sometimes wrong (6-3 against the spread with my best bets plus three consecutive teaser wins), beginning at 10 p.m. PT tonight and through Friday morning.

Frail State: Is Mississippi State Really the Best Team, or Just Another Victim for the Alabama Death Star?