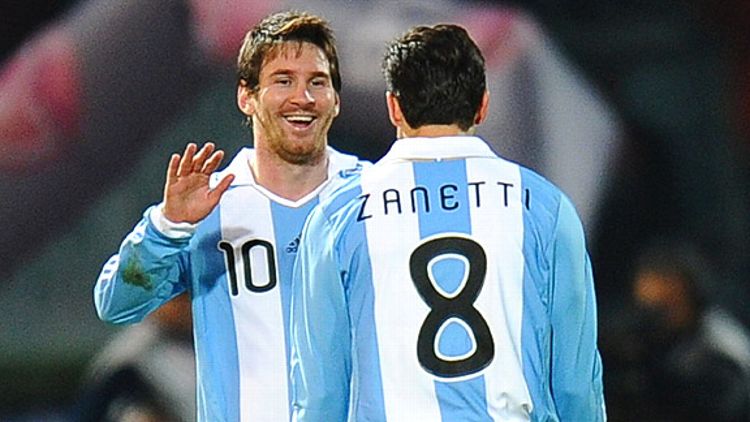 The 2011 Copa America: so far the fields haven’t looked that hot, the football has been somewhat cautious, great players have played just okay and nobody seems to want stand on the top of the mountain and, in the words of Ebby Calvin “Nuke” LaLoosh, announce their presence with authority.

But after two, spill-your-Arnold-Palmer-all-over-yourself performances, one from the best player on the planet and the other from a kid who might challenge him for that title in a few years, the Copa America is about to go off. Get your popcorn. It’s knockout cup football time.

Return Of The Jedi: About 9 minutes into Argentina’s must-win game with Costa Rica on Monday, Lionel Messi came back to life. He didn’t need anyone to stab him with adrenaline or yell “clear” before they hit him with paddles. He did it all by himself because self-resurrection is just one of the things the Barcelona forward is good at, along with field vision, dribbling and goalkeeper humiliation. If we give him time he will probably bring back Deadwood, but right now he’s got a Copa America to win.

The moment I’m talking about didn’t even end in a goal. But it was a signal to Costa Rica to hide the china and grab the Kevlar. Messi, picking up the ball and doing one of his I-have-a-different-center-of-gravity-than-everyone-else runs, dribbled across the top of the D cocked back and had a snap-shot deflected wide left for a corner. With the Cordoba, Argentina crowd rocking, there was something in the air that night.

In the 51st minute it was time for the Phil Collins drum solo: a slide rule pass from Messi to Sergio Aguero for “Kun’s” second goal, splitting the young, Costa Rican defense in half. After being mobbed by his teammates, Aguero shook free and, looking around at the crowd, pointed down at the smiling, diminutive Messi.

In the 63rd it got really, really real, with Messi teeing up Angel Di Maria who was coming to the end of a typically greyhound-like run towards the box.

This had to delight Argentina boss Sergio Batista. The under-fire manager, was starting to look like Colin Farrell if he had gone on shooting Miami Vice for 5 more years. Not only was his star player getting his second wind, after some performances that ranged from drab to unmemorable, but his other lineup tinkering had paid off too. Fernando Gago looked full of industry in the center of the park and Di Maria was picking up the ball deep, allowing Messi to roam free, closer to goal.

Argentina now faces Uruguay in the quarterfinals on Saturday in Santa Fe. These are two of the most talented sides in the tournament, but, unlike Argentina, Uruguay has yet to have their breakthrough game winning only once and drawing twice, while only scoring only three times in group play.

The other match in the Argentina’s quarterfinal bracket is between Colombia and Peru. While Argentina and Uruguay had a group stage to forget, Colombia comes into the quarters undefeated.

Perfect 10: Like Argentina, Brazil’s group stage campaign was some yawns mixed with a bit of manic fingernail biting. And like Argentina, the Selecao was led into the knockout stages by a young creative genius, albeit one with a less recognizable name. Less recognizable…for now.

Paulo Henrique Ganso (or just Ganso) is Brazil’s 20-year-old number 10. And against Ecudaor he had one of his finest games for the national team. Once dependably thrilling, you now never really know what Brazil you’re going to see. Part of the problem is that it’s a team of show ponies (hi, Neymar) and workhorses (what’s good, Lucas?), but very little in between. Except, against a tough Ecuador team, Ganso finally established himself as the creative link.

It was a little like seeing Ian Mackeye bust into a frat party and scream at everybody to put their Natty Ice cans in the recycling bin. Ganso’s passing (which you can watch here, accompanied by some very 1998 drum ‘n bass, don’t say I never did anything for you), seemed to snap Robinho and Neymar out of their step-over addiction. The goal he created for Brazil’s second—an ‘01-‘02 Jason Kidd, eyes in the back of his head, back-to-goal dish—for Neymar, must be seen to be believed.

After beating Ecuador 4-2, Brazil gets Paraguay in the quarters. In the same bracket Chile, arguably the most consistently impressive team in the tournament so far, plays Venezuela. They still play like a swarm of bees, attacking the goal in numbers. Winger Alexis Sanchez has been one of the standout players of the Copa, and seeing as how they were one of the few sides in last summer’s World Cup who bothered to attack Spain, part of me thinks they deserve this cup.

But it’s like Clint Eastwood said before he shot a dude, “Deserve’s got nothing to do with it.” If Chile want to lift some silverware, they’ll have to get through Venezuela and then, in all likelihood, Ganso and his suddenly goal happy boys in yellow. Game on.