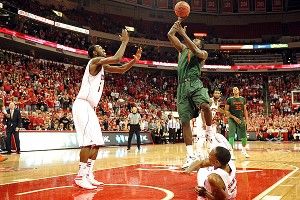 I promise there’s basketball later in this post, but I have to start off with the fans. Because Wednesday night at the RBC Center in Raleigh, while N.C. State and Miami were playing for their tournament lives, the Wolfpack faithful taught us all the three most important lessons about comedy.

Before the game, I saw a student hold up a yellow sign near half court. I walked over to check it out, and what I saw was essentially an essay on poster board. “What were Reggie Johnson’s impermissible benefits?” it asked (I’m paraphrasing). It then listed four foods in multiple-choice format, and offered an additional “all of the above” choice. “Answer?” it concluded, “All of the above.”

Fair enough, I thought. Reggie is fat, and the idea here is that his impermissible benefits were food items. I’m into it. I’d go there. But you could barely see what the sign said, and it took about 10 minutes to read it. Poor execution.

Then, just before tip-off, on the opposite baseline, a white sign rose above the crowd. In beautiful, bold black letters, two lonely words stood out: “Impermissible Benefits.” And pictured below, in all its glory, was a giant cheeseburger.

2. Volume and absurdity make everything funny.

Behind my seat on the baseline, wearing a red bandanna and a Wolfpack shirt, was the loudest fan in history. He was relentless, too, which may be why he disappeared after halftime — he may have blown his load early. But as the Miami players warmed up, he was in his element, hurling abuse for 20 straight minutes. Even the players were laughing and looking up. He mimicked their stretches, he made beeping reverse noises when they ran backward, and he completely ignored the unfriendly looks security threw his way. But the best and most absurd moment of all came when the players bent over for a hamstring stretch.

“Stick it higher!” he shouted, referring to their backsides. That prompted a few of the players to shake their heads. “Stick it HIGHER!” he repeated, unencumbered by self-consciousness. Then things got weird, and by weird I mean hilarious: “Oh no!” he yelled, “there’s a horse behind you! He’s coming up! Watch out for the horse!” The suspense built, and when the imaginary horse finally arrived, he made a series of loud moaning noises that I can only describe as “bestial.” He capped off the performance by yelling, “Oh, it HURTS!” and then moaning some more.

Toward the end of the game, during a timeout, there was a dance-cam thing on the scoreboard. One of the last dancers was a little kid, maybe six years old, who was really breaking it down in the aisle. The fans went nuts for him, and the louder they got, the faster he danced. He was really embracing the moment, and we were loving it. Then his sister, maybe a year older, came into the picture ready to bust some moves of her own. She started by pumping a fist in the air, a classic opener. Unfortunately, the fist hit her brother right in the face. After a horrified moment, he started crying and ran to his mom. The cheering died down, and a loud “ohhhh” spread throughout the crowd. The sister tried to comfort him, but if you think the stadium producers took them off the scoreboard during this embarrassing moment, you’re dead wrong. Instead, the shot lingered as the sister apologized and looked back and forth between her brother and the camera, horrified anew each time she saw that they were still on the screen.

Did I laugh? Was everyone around me laughing, as the humiliation built on itself? Who can remember? Am I a bad person? You tell me.

So a big thanks to N.C. State, who taught us that comedy is about brevity, volume, absurdity, and pain. Meanwhile, the Wolfpack players were teaching a lesson of their own, but this one was all about survival.

Lost amid the drama of early March — the race for conference titles in the Power 6, the mid-major conference tournaments with their obscenely high stakes — are games like last night, where two major-conference teams meet in a must-win situation.

Most experts agree that the ACC will land five teams in the tournament this year. They further agree that four of these teams are Duke, North Carolina, Florida State, and Virginia. The fifth spot will belong to N.C. State or Miami, making last night’s game arguably the biggest of the season; when the committee faces the choice, they’ll have a convenient late head-to-head matchup to help them decide.

State had the advantage of playing at home and owning the better record, but they had the disadvantage of coming off four disheartening losses. The slump began at Cameron Indoor Stadium, where the Wolfpack held a 20-point lead with 12 minutes left before blowing it and losing by five. Double-digit losses to Carolina and Florida State followed, and on Saturday they dropped an overtime game at Clemson. In just two weeks the Wolfpack’s certain tournament-berth started looking rather uncertain.

The Canes, on the other hand, had just come off a huge home win against Florida State, and, unlike the Wolfpack, had beaten Duke earlier in the season, giving them two quality conference wins to State’s zero. But with just 17 wins total, a loss would all but burst the Hurricane bubble.

The first half was a back-and-forth struggle. C.J. Leslie (21 points, 11 boards on the night) and Lorenzo Brown led the Pack to an early lead, but Miami’s balanced attack helped them engineer a comeback. At halftime, the score stood 36-34 in favor of the Canes.

Quick aside: Brown, a 6-foot-5 sophomore, is one of the most impressive players to watch in the ACC. He’s dogged by inconsistency at times, and he’s an inferior overall point guard to a player like Kendall Marshall, but his handle and raw athleticism are far more jaw-dropping. I took the liberty of making a quick highlight clip from last night, ending with a truly spectacular alley-oop to Leslie.

Brown finished with 16 points, five boards, and five assists, and the second half belonged to him and the Pack, who collectively shot over 60 percent in the final 20 minutes. Miami wouldn’t die, though, and a series of late 3s by Rion Brown and Malcolm Grant tied the game at 69 with 1:36 remaining.

That’s when Scott Wood, the slumping junior who dropped one of the season’s great quotes when he compared an earlier UNC loss to finding out that your wife was cheating on you, nailed a critical 3 coming off a screen. That gave State a three-point lead, but it had slipped to just one when Wolfpack center Richard Howell found himself on the line with 16 seconds remaining. Miami’s DeQuan Jones, who went to high school with Howell, had some words for him, and he and Rion Brown laughed and clapped when Howell missed the first. Durand Scott yelled “box out!” before the next shot. Howell missed that one too, but managed to tip the long bounce, and the deflection fell to C.J. Leslie, who swung it out to Brown, who was fouled and calmly hit both.

After Jones missed another three, Leslie found himself on the line with two shots to clinch a win. At halfcourt, Wolfpack senior Alex Johnson, in what would likely be his final home game, put his arm around Lorenzo Brown and fellow senior C.J. Williams. When Leslie’s first shot went down, they exhaled and began to celebrate. For another game, at least, State was safely on the bubble.

“I think we’ve had some tough nights, and our team could have folded,” said State coach Mark Gottfried after the game. “We’ve got a lot of fight in us.”

Miami coach Jim Larranaga lamented the fact that State assisted on 19 of 28 field goals, while Miami assisted on just 10 of 26, indicating a more fluid offense and better passing. “Getting on the road and winning in the ACC is difficult for everybody,” he said. “Ask anybody in the conference how tough it is. Especially if your name is not Carolina or Duke.”

Most of the players wouldn’t admit to thinking about the NCAA tournament — the typical cliche response was “we just have to take it one at a time, we’re not thinking beyond that” — but Alex Johnson talked about the feeling of winning his final home game.

“I just told them to soak it all up,” he said. “Four years comes by quick. I’m living proof of it.”

I knew I had to check in with Scott Wood, the streaky shooter who laughs with the referees during timeouts and casts them baleful looks whenever a call goes against him. I told him I enjoyed his quote from the Carolina game. If that loss felt like being cheated on by your wife, what did this win feel like?

It’s not a question you expect an athlete to play along with. But Wood isn’t your ordinary athlete. He thought for a moment, giving it real consideration.

“I don’t know,” he said finally. “Finding out your wife is Heidi Klum, or something.”

And the Pack lives on.