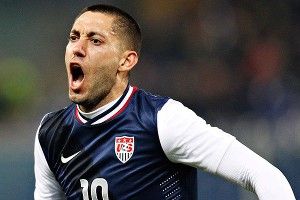 With their beloved Downton Abbey gone but not forgotten, and the Oscars a plodding replacement, only a peerless feast of football could save the Men in Blazers from the mid-winter blues. Luckily for this week’s pod, their cup runneth over.

Michael and Roger kick things off with the United States’ victory over Italy in Genoa on Wednesday. A gritty, collective effort that was sure to put a smile on former national team coach Bob Bradley’s face (if such a things is possible). Rubbernecking at the wreckage of England’s 3-2 loss to the Netherlands, the Blazered Boys move from country to club. In the Carling Cup that nobody — yet secretly everyone — wanted to win, Liverpool emerged triumphant thanks to one of the most pitiful penalty shootouts in recent memory. But their story wasn’t the only one of deliverance over the weekend. Arsenal hoped to salvage the season with a comeback for the ages against crosstown rival Tottenham.

Scintillating stuff, indeed. But just as the pod ends, the Black Dog returns. Oh, Mrs. Patmore, where art thou?