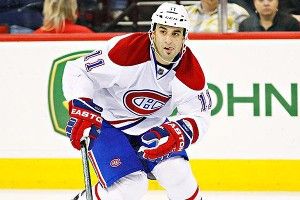 Hockey’s Three Stars of Comedy is a monthly feature that will recognize the three NHL personalities from around the league who produced the most comedic fodder for fans. It will appear every month until Brian Burke finally fires Ron Wilson, which means it will run forever.

Dwayne Roloson, Tampa Bay Lightning
Imagine you’re a 42-year-old goalie having a terrible season for a terrible team, and you’re facing a guy who is quite possibly the best player in the entire league. What would your strategy be?

If you answered “Not punch him in the face since that would just make him angry,” then you’re apparently smarter than Dwayne Roloson, who thought it would be fun to go after Evgeni Malkin. In a stunning turn of events, that did not go well for him.

Alain Vigneault, Vancouver Canucks
Like the old hockey adage says: Notoriously gruff and cranky coaches are just so adorable when they have a spontaneous giggle fit during a game.

Tim Thomas and Brad Marchand, Boston Bruins
So here’s the thing about comedy: It rarely works well as a sequel. Think The Hangover Part II. On its own, not an awful movie. But if you’d seen the first one, the second just played out like a badly warmed-over remake. You kind of wish they hadn’t bothered.

The Boston Bruins apparently missed that lesson, since a pair of them who made our January list decided to try the same shtick again this month. Tim Thomas was back to posting politics on Facebook, and Brad Marchand was back to hurling himself at an opponent’s knees. Critics weren’t impressed, calling the work derivative and uninspired.

The only real laugh to come from either incident was Brendan Shanahan’s explanation of why Marchand didn’t earn another suspension: This time, he only launched himself at a thigh, not a knee. Oh yes, of course, the patented squeaky-clean thigh-check, just like we were all taught as kids!

Scott Hartnell, Philadelphia Flyers and Dion Phaneuf, Toronto Maple Leafs
Speaking of last month, remember how we talked about Hartnell’s “Suck it, Phaneuf,” and how the Leafs defenseman took the whole thing in stride and there were no hard feelings and it just seemed like a nice example of two pals having fun in the All-Star Game?

People who used up a vacation day on Monday to stay home and wait for blockbuster trades
Better luck next year.

Craig Anderson, Ottawa Senators
For the first time in years, the Senators are getting decent goaltending. The team is overachieving, the playoffs are almost locked in, and everything is beautiful. So it goes without saying that Anderson decided it would be a good time to slice into his finger while cooking dinner.

Now we all know that injuries can’t be considered funny, and so he lied, so that overly sensitive Senator fans wouldn’t cry at him. But this is now the second meal-related injury in the NHL since New Year’s. First Dustin Penner throws his back out eating pancakes, and now Craig Anderson decides to go Mordecai Brown on us.

What’s going on here? And more important, what would happen if Anderson and Penner tried to cook pancakes together? Why isn’t this already a Canadian reality TV series?

I guess what I’m trying to say is, maybe LeBron James was on to something.

For one thing, it was the trade deadline. That means half the hockey fans in the world were busy creating fake Twitter accounts to try to trick people into retweeting made-up rumors, and the other half were busy retweeting fake rumors and then being outraged by them. Then you had the usual collection of frauds and fake insiders. Then you had morons yelling at Brian Burke. All pretty standard stuff.

But then two NHL teams decided to join the fun. Well, one decided. The other was a little more involuntary.

With the Columbus Blue Jackets in the middle of a full-scale franchise meltdown that would see them virtually give away their second best player, then keep their actual best player before throwing him under the bus to make sure there was no chance of him sticking around past his season, the folks who run their Twitter feed decided it would be a good time to stop caring.

At least they chose their fate. No such luck for whichever Calgary Flames employee used to update their Twitter account. That poor soul decided to use some down time to do what every other hockey fan on the planet does when they get a spare moment: make fun of the Edmonton Oilers. Unfortunately, they accidentally broadcast their carefully thought-out critique to the team’s 90,000 followers. The Flames later apologized.

Given that whoever sent the tweet apparently thinks Ales Hemsky’s contract is the funniest thing they’ve heard in a long time, the most stunning part of the story may be that apparently Flames employees don’t pay attention when Jay Feaster says that he thinks they’re going to make the playoffs.

Scott Gomez, Montreal Canadiens
Scott Gomez had a bit of a slump.

Gomez scored his final goal of last season on February 5, 2011. Thanks to some bad luck and injuries and the fact that he’s now terrible, he hadn’t quite got around to scoring a goal this season when February 5, 2012 arrived. Yes, one full calendar year without a goal. That’s bad, if you’re a stay-at-home defenseman or a rookie fourth-liner or a backup goaltender. If you’re supposedly an offensive center who makes more than $7M a year and plays in Montreal, it’s downright cataclysmic.

Hockey fans, being the positive sort that they are, took the opportunity to celebrate the pending anniversary. They organized parties. A helpful website, cleverly titled DidGomezScore.com, was created. On the night that the streak reached one full year, Canadiens fans even serenaded him with a rousing French rendition of “Happy Birthday,” which made everyone else happy because for once they weren’t doing idiotic soccer chants.

Alas, all good things must end. In Gomez’s case, the streak was snapped a few days later, on February 9, when he scored on the power play against the Islanders. Fans wondered who should be more embarrassed: the Islanders, for giving up the goal, or the Canadiens, for having Scott Gomez on their power play. In the end, we voted to call it a tie.

R.I.P., The Drought: February 5, 2011 to February 9, 2012. The lesson, as always: When Scott Gomez scores a goal, that’s your reminder that it’s time to buy your spouse a Valentine’s Day present.