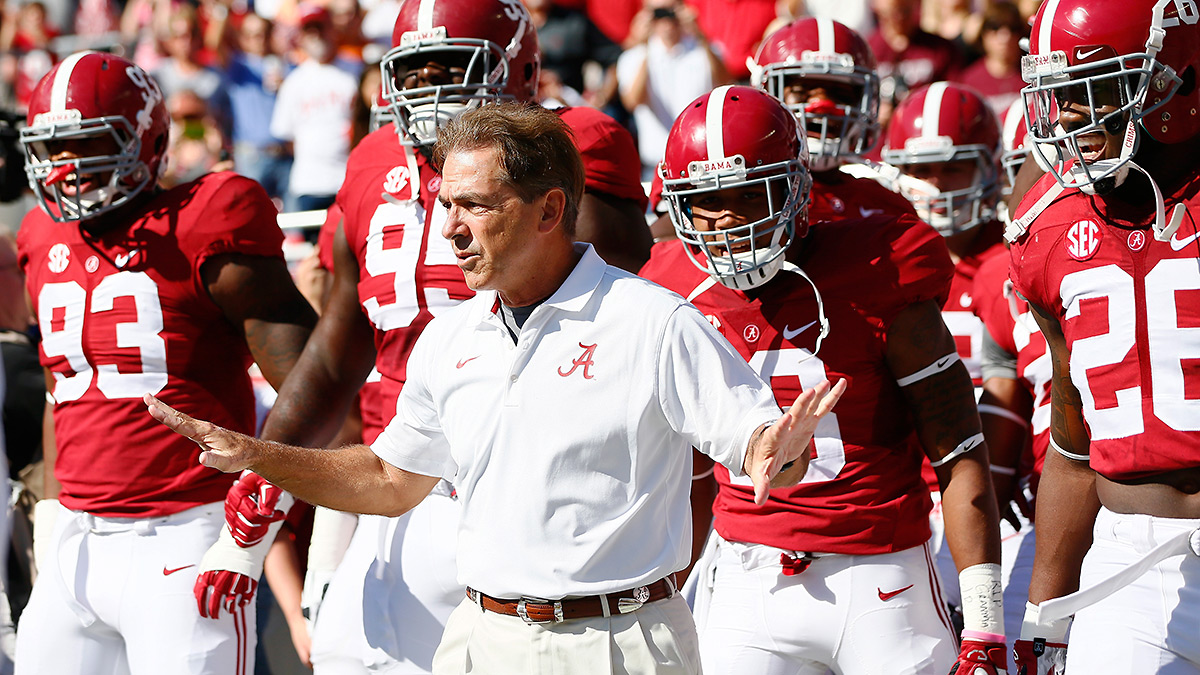 Each Tuesday during the remainder of the regular season, the committee tasked with selecting four teams for the first College Football Playoff will release its own version of the Top 25, which would serve as a clear road map if the playoff began today. Since the playoff doesn’t begin today, though, some calculations are in order.

In Playoff Realpolitik, we reorganize the Top 10 according to each team’s chances of actually making the playoff field in December, regardless of its ranking on a given weekend. Projections take future schedules and multiple possible scenarios into account to determine the true pecking order, with the understanding that the real winner in the end will be chaos. Always chaos.

The Crimson Tide’s come-from-behind, 20-13 win at LSU was the gridiron equivalent of the richest guys in town slugging each other with bags full of nickels for four hours straight, and not nearly as much fun to watch until the dying seconds. (On the flight home, senior offensive lineman Austin Shepherd said the entire team felt “like you were hit by a Mack truck.”) Accordingly, Alabama didn’t budge in the committee’s estimation, remaining at no. 5 for the second week in a row despite the exhausting victory and the vacancy in the top four left by Auburn’s loss to Texas A&M; instead, the committee promoted TCU from no. 6 to no. 4, a move that — surprise! — didn’t sit too well with some Bama fans. Since when does a road win in Baton Rouge result in the victor getting leaped?

Rest assured that the outrage is temporary. This weekend, Alabama gets no. 1 Mississippi State in Tuscaloosa for a blockbuster that could ultimately decide the SEC West, and therefore the SEC as a whole, which will put the winner in the pole position for the no. 1 seed nationally. Early lines listed Bama as a 7-point favorite, and the spread has already moved further in the Crimson Tide’s direction. Only a half-dozen teams still control their own destinies regardless of how the rest of the season plays out elsewhere, and Alabama is one of them.

Still, like virtually every other team on this list, Alabama has no margin for error: With each passing week, the cost of a second loss gets a little steeper. In fact, the only team here that could realistically survive a defeat at this stage of the season is Mississippi State, which is playing Saturday for (among other things) the right to a mulligan. If the Bulldogs spring the upset, they’ll move to 10-0 overall and 6-0 in SEC play, needing only to beat Vanderbilt on November 22 — the Commodores have yet to win a conference game — to clinch the West Division. From there, MSU could go on to lose its season finale at Ole Miss and still come back for the following weekend’s SEC championship game with the playoff well within reach. A loss in Tuscaloosa would be much more difficult to absolve, as it would put the Tide on track to win the division instead.

The committee is also guilty of DISRESPECTIN’ THE NOLES by demoting the defending champs from no. 2 to no. 3 in favor of Oregon, but here, too, the distinction is irrelevant: When the final field is set in December, one of the semifinal games will pit the no. 2 and no. 3 teams head-to-head at a neutral site. Literally nothing has changed for FSU, or will change as long as it keeps winning. Now, Oregon might be interested in the exact seeding, so it can get a head start on the uniforms — light or dark? Monochrome or high-contrast? Neon or metallic? — but the Seminoles’ only concern is getting past Miami this weekend1 and closing out the regular season without taking the hit they’ve so deftly eluded all year.

The Ducks have already punched their ticket to the Pac-12 title game as runaway winners of the North Division, and aren’t likely to encounter any problems in the meantime against bottom-dwellers Colorado and Oregon State. ASU has it a little tougher in the South, where no. 14 Arizona lurks with designs on rendering the division standings as indecipherable gibberish. Still, last Saturday’s 55-31 thumping of Notre Dame put the Sun Devils squarely on the national radar. If they can get to the Pac-12 title game with only one loss, the championship tilt with Oregon will serve as a de facto national quarterfinal.

The Bears leapt from no. 12 to no. 7 following their 48-14 dismantling of Oklahoma, and although they remain three places back of Big 12 front-runner TCU for the time being, in the long run the upper hand resides in Waco. More important, the head-to-head tiebreaker resides in Waco: Baylor beat TCU in October in a wild, 61-58 decision that saw the Bears rally from a 21-point deficit in the final 11 minutes. At the time, that game looked like a paragon of the kind of mad science we see out of mutually stimulated Big 12 offenses a couple times a year, and nothing more. But over the next few weeks, it’s poised to become the most consequential game of the year.

As I outlined on Monday, if both teams finish 8-1 in conference play, the playoff committee is under no obligation to defer to Baylor as the Big 12 champion based on the head-to-head result or any other factor. (Big 12 commish Bob Bowlsby reiterated this week that the league has no influence on how the committee ranks its teams, or which one it designates as the “champion” in case of a tie in the conference standings — an especially awkward scenario for a conference that touts “One True Champion” as its official motto.) But common sense would seem to favor Baylor, and the remaining schedule does, too: Unlike TCU, which wraps the regular season against Kansas, Texas, and Iowa State, the Bears still have a quality opponent on deck in no. 13 Kansas State. The Horned Frogs have the better résumé right now, but once all the games are played and the ledgers are balanced, the nod will likely go to Baylor. 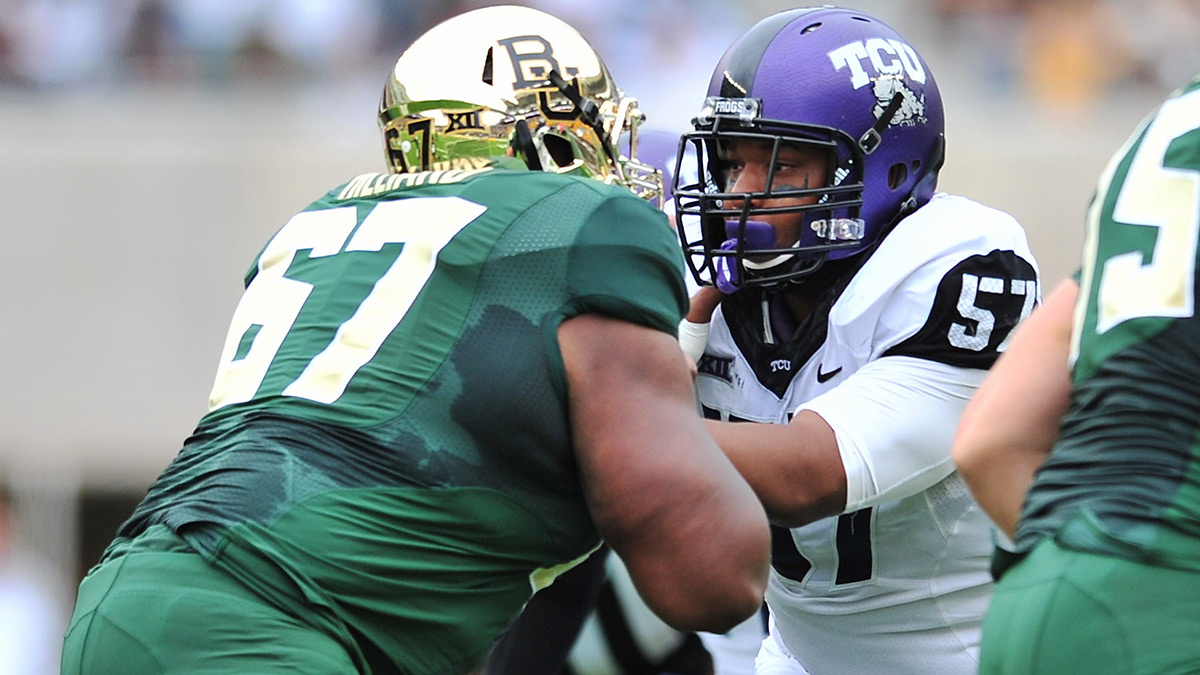 Short of a Baylor loss, the most compelling argument in favor of the Horned Frogs is their 30-7 win over Minnesota on September 13, far and away the most impressive nonconference victory by any Big 12 team this season. (Baylor’s best nonconference win came at the expense of a MAC tomato can, Buffalo.) Minnesota landed at no. 25 in this week’s committee rankings on the heels of a 51-14 rout of Iowa, which must have factored into TCU’s promotion into the top four. But the Gophers are also running directly into the teeth of the Big Ten schedule, with upcoming dates against Ohio State, Nebraska, and Wisconsin on consecutive weekends.2 A month from now, that win may not bolster the Frogs’ case as much as they hope.

Again, Mississippi State gets the asterisk because it’s the only team that can plausibly survive a loss down the stretch, and again, it would be much better served if said hypothetical loss came in the Egg Bowl rather than in this weekend’s division-deciding trip to Alabama. If the Bulldogs do go down on Saturday, though, they can still build an effective case for playoff inclusion by going on to beat Ole Miss and finishing as 11-1 runners-up in the most respected division in the nation. And if Alabama were to win on Saturday but subsequently lose to Auburn, the path would be clear for Mississippi State to represent the West in Atlanta after all. It’s nice to have options.

The Bulldogs may be afterthoughts right now at no. 15, but they just restored the best player in the nation to the depth chart, and the schedule is their friend: From no. 15, it’s a short hop to contention if Georgia is able to dispatch no. 9 Auburn and no. 22 Georgia Tech en route to toppling Alabama or Mississippi State in the SEC title game. Even with two fairly damaging losses at the hands of South Carolina and Florida, UGA — with Todd Gurley at full speed — is pretty clearly the East Division’s best chance to claim the SEC crown and the inevitable wave of playoff support that will come with it. (Georgia already owns the East’s only victory over the West this season, a 45-32 win over Arkansas.) The only catch is that the Bulldogs have no shot at winning the division or anything else without a loss by Missouri, which isn’t ranked this week in any of the major polls but does sit alone atop the SEC East standings. The Tigers close against Texas A&M, Tennessee, and Arkansas, any of which would be very happy to ruin another team’s season at the eleventh hour.

The Buckeyes established their bona fides Saturday in a 49-37 beatdown of Michigan State; the Cornhuskers’ litmus test comes this weekend against no. 20 Wisconsin, the winner of which will almost certainly go on to play OSU in the Big Ten championship game. The winner of that will need at least five of the eight teams listed above it here to lose to clear a path to the final four, and if one of those losers turns out to be Mississippi State, even that might not be enough. Obviously Big Ten types will chafe at the notion that a two-loss SEC outfit that doesn’t even control its fate in its own division is somehow more qualified to make a run than a potential one-loss B1G champion, but if the dominoes don’t break the Big Ten’s way, it shouldn’t come as a surprise.

The Tigers rank below Georgia here because their route to the final four is much more far-fetched, although technically achievable: If Auburn beats Georgia this weekend, and Alabama beats Mississippi State, and Ole Miss beats Mississippi State in the Egg Bowl, and Auburn beats Alabama in the Iron Bowl, then Auburn would (incredibly) emerge as the winner of a four-way tie atop the SEC West.3 I don’t know what the odds are of that exact sequence of events actually coming to pass, but I do know that if the seas are going to randomly part for any team, it’s probably going to be Auburn. Make it that far, and the regional politicking on the Tigers’ behalf will be a cakewalk by comparison.

The script for Ole Miss’s resurgence into the national picture is similarly specific: The Rebels need Georgia to beat Auburn, and Alabama to beat Mississippi State, and Auburn to beat Alabama to set up a scenario that would drop the West Division title in their lap with a season-ending win in the Egg Bowl. It’s possible! Just don’t hold your breath.

The Bruins own the head-to-head tiebreaker in the Pac-12 South by virtue of their convincing wins over Arizona State and Arizona, and have an opportunity with wins over USC and Stanford to close the regular season on a six-game winning streak. They also need ASU to lose one of its last three to force a rematch with Oregon in the Pac-12 title game, and then a dozen other outlandish scenarios to fall into place beyond that. Keep on dreaming, and maybe recruit a more reliable kicker.