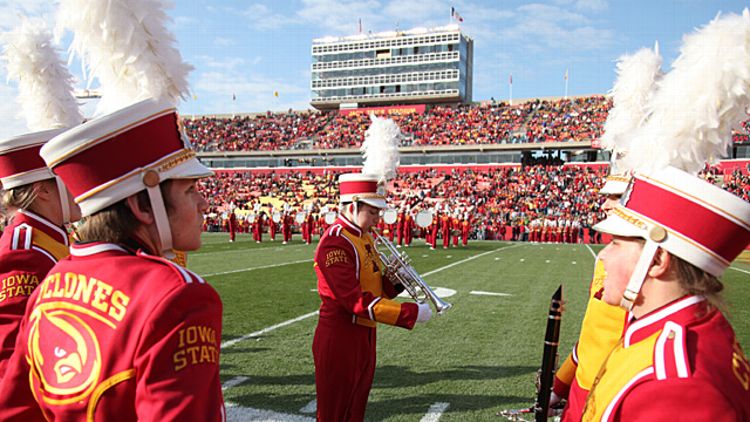 Let’s overlook the dearth of tremendous, season-altering upsets and what is almost certainly the least-compelling batch of Heisman candidates of the past several years. College football has seasonal affective disorder. Just something about the sun going down at damn near 5 p.m. causes a profound sadness that nothing can cure, not even the ability to buy five pounds of fun-size Clark Bars at rock-bottom, post-Halloween discounts at Ralphs. As a result, the CFMI doesn’t get out much these days, and the past two weeks has resulted in some awful hermit-like behavior. Which is why our cultural framework to discuss the most downtrodden, distraught, and depressed teams in college football is limited to the only things CFMI really can bring itself to do these days. Which is to say, snooping around 7-Eleven’s magazine rack and watch Netflix. Hey, we never said we were about uplifting the human spirit here.

Threat Level: Katy Perry
I think we can all agree that the primary purpose of Facebook is to provide us pictures of our exes with their new significant others so we can get a fairly accurate idea of how attractive we are. This could likely explain the attraction to John Mayer, who is neither the richest, most talented, most charming nor most attractive dude out there. But if you’re under the age of Warren Beatty and have an entire US Weekly slideshow dedicated to your ex-girlfriends, well … I imagine it must be flattering to be included in that list, right?

By the same token, you see Perry’s anime eyes on the cover of US, wondering if she’ll suffer the same heartbreak. And now here’s Kentucky looking for a new head coach and having the father of Bobby Petrino indicate mutual interest, playing it off like a good idea even though he’s every bit as likely as John Mayer to completely screw you over the moment a hot blonde comes across his path. But you know — it’s not like that’d be much of a problem at an SEC school, right?

Before there was John Mayer, there was Duncan Sheik, or at least in terms of guys who almost certainly showed up to your dorm room with an acoustic guitar and “a few songs I’ve been working on” (I’ve heard various accounts of his days at Brown University). Let’s try this again: Before there was John Mayer, there was Adam Duritz, who wrote a song with the following lyrics as the chorus: “All my friends and lovers leave me behind / I’m still looking for a girl.” The year was 1999 and he had already dated two non-male cast members of Friends.

Likewise, Louisville knows better than to cry poverty even in a year when they will almost certainly go undefeated in a BCS conference and be maybe the 12th choice for the BCS Championship, slightly ahead of a one-loss Oregon, but a little behind the Jacksonville Jaguars. Because is there any better situation for a team like Louisville? Yes, they were marooned in the Big East despite having more football and basketball success as of late than either Pittsburgh or Syracuse. But at the same time, that $18 million spends exactly the same whether you get run out of Tempe by Alabama or are ignored by the public at large against Florida State in the Orange Bowl. After all, Louisville plays in a stadium named after Papa John’s Pizza — you pretty much opt out of any sort of self-respect once that happens.

Threat Level: Anna Faris
I like Anna Faris. You like Anna Faris. Who doesn’t like Anna Faris? It’s abundantly clear that people want her to succeed, which becomes more abundantly clear every time she scores a true lead role, because they are without fail completely awful. Go read reviews for What’s Your Number? and House Bunny, which reach drunk-text levels of apologia — she’s “misused,” “criminally underutilized,” “waiting for the movie that finally gives her the script she deserves,” etc. At which point do you ask yourself what sort of Herculean undertaking must occur for her to properly lead a movie?

I like Iowa State. You like Iowa State. Who doesn’t like Iowa State, seeing as how they’re undeniably the pluckiest of all BCS schools, at least those that aren’t already acknowledged as academic powerhouses? It’s second banana in a recruiting dead zone, but unlike Iowa, their most recognizable NFL player might actually be Sage Rosenfels and they compete against the Texas schools every single year. And yet they tend to liven things up in their own way, scoring a shocking upset or at least a good trap game warning, to the point where they can actually climb in to the back end of the Top 25 despite an iffy two-loss record. At which point, they get absolutely run off the field by air raid offenses and slink back to hoping that they can get to six wins quick enough. What Herculean undertaking must occur for Iowa State to win 10 games, and is Paul Rhoads gonna stick around for that, especially when Auburn is in a situation in which “hey, what if we hired a coach who won at Iowa State” is crazy enough to work?

Threat Level: Mike Brown
Let it be known that I am not equating the Illinois head coaching job with the Los Angeles Lakers head coaching job. The latter is as much about Q rating as it is X’s and O’s — a great Lakers coach should be someone you wouldn’t trust your girlfriend around, not someone who looks more suited to be giving the people of Utica their five-day forecast. On the flip side, the University of Illinois spent seven years looking at their on-field product and thinking, “You know what? We really can’t do better than Ron Zook, let’s just see how this plays out.”

And the logic of the respective hires is certainly divergent as well. With Mike Brown, one could conceivably think, “Well, if he got to that point with LeBron James, imagine what he could accomplish with three superstars!,” ignoring the fact that multiplying three negative values gives you a larger negative number. Meanwhile, Tim Beckman is the exact kind of coach you expect to succeed at Illinois, one who uses a successful Toledo team as a stepping stone and has a look and name that screams “frequent Meineke Car Care Bowl of Texas participant.”

At the same time, is suffering necessarily related to expectations? It doesn’t matter if you play three times a week or only on Saturdays, it just hurts your heart when damn near seven games into a season, we need the boss man to give them a thumbs-up to counter opinions that they’re in “way over their heads.”

Threat Level: Dane Cook
This is the fourth College Football Misery Index, so I’ll share a bit of personal information I typically only reveal after four dates: I have seen Dane Cook perform standup comedy numerous times. In my defense, they were work-related and you bet your ass I had to expense the hell out of some $8 Blue Moons as recompense, since revenge drinking is the only worthwhile kind. To his credit, each experience provided something entirely different. I saw him do a dark, off-the-cuff taping at the Laugh Factory that riffed on the death of his parents and failed relationships. There was also his show at Staples Center, which was easily one of the most harrowing live performances I’ve ever been a part of, filling an “arena comedy” vacuum that never existed in the first place.

The latter is the picture most people get of Dane Cook, and I can’t blame anyone for thinking he’s “Nickelback: Let’s Get Silly.” Sure, a lot of his attacks are based on jealousy in a field where nearly everyone is totally miserable and the economic stratification is more along the lines of professional boxing. But most people fail to see the Dane Cook who got swindled out of millions by his half brother and wearied from the constant criticism by the same people he wanted to entertain. His appearance on Louie was a game changer on that end, proof that money doesn’t insulate you from feeling like stuff and that observational comics are bound to come up with the same jokes. His asshole itches sometimes. It was a beautiful thing.

Admittedly, as a Virginia alum, there is absolutely no reason whatsoever I should feel sorry for Maryland — not after Ralph Friedgen’s “we expect to beat teams like Duke and Virginia” quote preceded a 35-point loss to UVA, not after Randy Edsall said damn near the same thing (“here at Maryland, we don’t lose to Virginia”) and subsequently lost by 18, and certainly not after 2011, when Edsall’s “my way or the highway” approach gutted Maryland’s roster. And, yeah — the uniforms, those too.

And yet … there’s the sight of Shawn Petty lining up as the fifth starting Maryland quarterback of the year, wearing no. 31 because he’s a former linebacker and everyone else on the depth chart who had come to College Park with the intention of throwing passes had their ACLs exploded. Just try not to feel sorry for a BCS team using essentially the same strategy as AEPi’s intramural flag football team — “Hey, he played quarterback in high school for a game, let’s see how he does!”

Threat Level: Mark Lijek and Joe Stafford, Argo
There was much to admire about the cinematic experience of Argo, but above all else the introduction of Ben Affleck–as–Tony Mendez — irresponsibly bearded, half-clothed in a rumpled blazer, surrounded by empty tallboys and Chinese food cartons — gave pretty much all of my writer friends in New York the easiest last-minute Halloween costume ever.

For our purposes, the relevant emotional peak occurs when Lijek and Stafford confide about how they strong-armed and guilted their wives into letting them keep their jobs at the U.S. Embassy in Iran. She thought, you know, being in a violent and unstable country that thinks you’re the Great Satan might not have been the safest idea, but the guys wanted to show their superiors they had the balls to do whatever dumb stuff they ask of them. That’s how one moves up the ladder in Washington.

True, a few points here and there and BYU could be a serious BCS candidate due to their strength of schedule, and if they told the Big East to jump, they’d say “how high” and probably permanently bar legendary Halloween party school East Carolina just to make them feel more welcome. But I guess it’s not like they need the money.