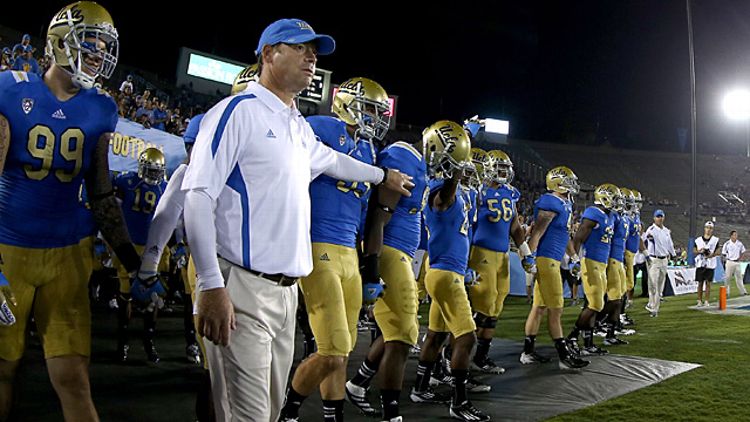 And then, the retribution of last weekend: The blowouts were joyless and lacked humor, the close games were water-gun duels of offensive ineptitude disguised as defensive struggles. God bless West Virginia, as always.

In the midst of this bipolarity, this edition of the Misery Index does not necessarily feature the most depressed teams in each conference. That would be too easy and also would make this is a de facto Kansas fan blog every single time out. No, this is more about finding some sort of balance in between the dizzying highs and the terrifying lows. And when surveying this rich range of emotion, we absolutely have to start with Spin Doctors.

If you’re evaluating Spin Doctors in the big picture — and really, there’s no other way — it appears their main source of artistic inspiration (“Little Miss Can’t Be Wrong,” “Two Princes,” “Jimmy Olsen’s Blues,” the immortal “Cleopatra’s Cat”) is lead singer Chris Barron’s unshakable conviction that women want to have sex with someone other than him. When the time came to cover KC and The Sunshine Band for the Space Jam soundtrack, they chose none other than Biz “Just a Friend” Markie as a collaborator and presumably kindred spirit. All things told, along with My So-Called Life’s Brian Krakow and Skee-Lo’s “I Wish,” no one did more than Spin Doctors to promote using self-deprecation as their main weapon of beta-male courtship.

It’s something that most of (what’s left of) the Big East can relate to. Six weeks into the 2012 season, Louisville, Cincinnati, and Rutgers all feel like the doofy guy being told that they have “such a great sense of humor.” Despite their recent gridiron success, these three programs are all basically throwing themselves at ACC commisioner John Swofford’s feet, à la Pocket Full of Kryptonite’s most overlooked single, “How Could You Want Him When You Know You Could Have Me?” They ain’t got no future or family tree, but in 2012, they know what an ACC space filler ought to be — prone to the occasional no. 23 spot in the Coach’s Poll, guaranteed to give you a mildly entertaining Thursday-night game, and the exact kind of team you could root against if they played Ohio or Louisiana Tech in a BCS bowl.

Threat Level: Gunplay
As with the walking pharmaceutical guinea pig/amazing rapper/Rick Ross accomplice Gunplay, Big 12–via–Big East–via Mountain West newcomer TCU represented mid-major to major ascendancy you could believe in. Until their past, grimy ways started to catch up to them. Gunplay picked the worst possible time to be himself; TCU is rediscovering its roots as a quasi-corrupt SWC also-ran at the wrong time. Much like catching a beatdown from 50 Cent’s crew, suffering a shocking upset to Iowa State is something that simply happens year after year to someone very likeable without any warning. Now, Gunplay’s going to jail before he can drop Bogota or Medellin, and the Horned Frogs are likewise resigned to giving up on the rest of 2012 now that starting quarterback Casey Pachall has left school for outpatient treatment. I’d love to close the circuit with an appropriate Gunplay quote here, but I’m pretty sure my parents might read this, so here’s “Jump Out.” Let’s watch it with the 2011 Rose Bowl and remember the good times.

Threat Level: Jack Horner
Fun fact: Every team in the ACC lost last weekend. I have no interest in fact-checking this, so let’s go with it. In no way does it do the ACC justice by limiting the scope of its failure to one team, so this one goes right to the top. Now, Boogie Nights can go toe-to-toe with just about any comedy with its first half, until Jack Horner’s cash-flush and severely troubled stable of talent remember how fragile they are and start losing their minds, either literally or figuratively, in a coke-fueled race to the bottom. That’s ACC commissioner John Swofford right now.

Where to begin? Well, how about Boston College losing to a winless Army team (and not one of those WWII-era Army teams where even the third-string wingback could score two touchdowns, kill three Nazis, and father six children in the span of a single weekend). Even the old reliables don’t have it anymore: Virginia Tech has squeezed three seasons’ worth of typically baffling September/early-October losses into a month, Miami’s still in the driver’s seat because their two losses are blowouts to the sort of squads (Kansas State, Notre Dame) the ACC might face in the Orange Bowl. Duke might win their division or they might not even win a sixth game — both are on the table. Georgia Tech just fired defensive coordinator Al Groh after his newfangled 3-4 gave up 243 points in the past two weeks alone. He’s a two-time ACC Coach of the Year.

Then there’s Virginia, who lost to Duke by 25 points despite out-gaining them, had their practice facility catch on fire (because … why not?), and is in the midst of a four-game skid that began when they lost 52-20 to a team that would fire its defensive coordinator a month later (a guy who pockets of Virginia fans still wishes was their coach). Oh, and due to their obvious failure to perform at crucial times, Florida State is definitely the “Feel My Heat”–era Dirk Diggler in this scenario.

Threat Level: Hulk Hogan
Perhaps you’ve heard about the filmic adventures of one Hulk Hogan, and how the release of a sex tape has him “devastated.” Now, I haven’t actually seen it yet, but judging from the response on the Internet, he couldn’t have paid someone to come up with a better advertisement for sex with Hulk Hogan. And yeah, surely it’s somewhat emasculating for Ohio State to play for nothing of actual value in 2012 and they have to act like they’re likewise devastated and sorry for messing up a couple of years ago, but it’s clear from the kind of Hulk-like beatdowns they’ve been serving up against Nebraska and such that anyone who wants a piece can come and get it. Once they’re free and all.

Threat Level: The Game
Due to their wildly distorted delusions of grandeur, obsession with the late ’80s, and hilarious inferiority complex, both UCLA and The Game have based their personae on telling everyone who’ll listen how much better off we’d be if they assumed their rightful place as kings of Los Angeles. That is totally untrue — we’re all better off when their embarrassments are as public as possible. The wild mood swings of UCLA’s season thus far has made for great theater, if not particularly winning football. Whether it’s Jim Mora deciding to make lighthearted jokes about USC’s campus murders or Brett Hundley’s dichotomous legend being built with 72-yard runs and three-interception quarters, UCLA probably doesn’t care that it got its ass handed to it by 1-4 Cal this past weekend. They usually don’t get featured on SportsCenter unless they’re playing USC and, as they say in this town, there’s no such thing as bad PR.

Once again, you might think whoever lost last weekend’s Auburn-Arkansas game would be a mortal lock for this spot. I dunno, it’s got a real “too hot to touch” feel about it, not unlike Bumfights, a recent season of the Real World, or the tail end of a Smack DVD rap battle. You just feel bad that somehow both parties ended up debasing themselves. Besides, a fan base can’t truly be depressed if they’re almost 100 percent certain they’re gonna have a new coach next year. Things might be rocky at home, but I’d say both of those squads are in the “surreptitiously checking OkCupid while their wife’s asleep” phase.
On the other hand, you have Georgia embodying the suburban Stockholm syndrome that Eddie Vedder so gruffly sang about in between songs about bugs and foxymophandlemamas. There’s a deflating mixture of rationalization and lowered expectations going on in Athens. Such is the Bulldogs’ lot this year, in which an increasingly typical, all-inclusive ass-kicking at the hands of a rival is weirdly acceptable, as UGA’s cushy schedule and South Carolina’s hellish one means they could be in the SEC East driver’s seat by Halloween, if not earlier. Such is the quandary: Mark Richt’s teams are providersNon-BCS — Memphis

Threat Level: Hans Moleman
Some pictures say a thousand words; this one says about 15. And those are, “Today, Part 4 of our series on the agonizing pain in which I live every day.”