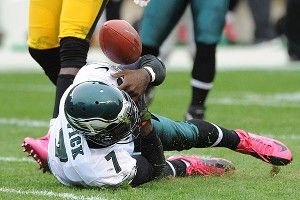 Rough one last week. My wretched prop bets cost me a gargantuan 49,700 jermajesties.* These days the gambling gods and I are getting along about as well as Nicki Minaj and Mariah Carey. I’d like to know — do those gambling gods think I’m playing? I’ll tell you right now I’m not sitting here for 20 minutes and having them run down their résumé every five minutes, every day. They’d better not say one more disrespectful thing to me about my crappy picks or I’ll shoot their Dreamloving asses.

OK — glad I got that off my chest. Now I can ditch my pink wig and hopefully move on from this pigskin-prognostication misery.

The good news is, my fake bankroll is still at a positive 18,050 jermajesties overall. The bad news is, this is all nonsense and I’ll never be able to cash in.

Jets to score over 23 pts. vs. the Colts

I know betting on the Jets seems like a great waste of jermajesties, especially since in the last four games the Jets have put up 10, 23, 0, and 17 points. This week they face a Colts team that’s coming off an emotional game. You can’t expect them to show as much effort in Week 6. They are, in fact, the Colts. The Jets’ biggest problem (besides disrespecting God by keeping his favorite player sidelined) has been getting the running game going. I like their matchup against the 25th-ranked Colts rush defense. 20,000 jermajesties

Anytime the leading rusher in the league has a date with the up-and-down Bucs defense and is given double-digit odds to come out on top, it’s worth a shot. The best part is that Charles is the type of back who can win you this bet 20 minutes after the end of the pregame show. 3,000 jermajesties

I swear I’m going to hit one of these Monday bailout props, even if I go broke doing it. Let’s go broke together. 3,000 jermajesties each

Michael Vick will fumble this week (+150)

Over/under 6.5: healthy Steelers remaining on their roster by Week 17

Has anyone ever fielded a team of five or fewer players before? Maurkice Pouncey, Marcus Gilbert, Rashard Mendenhall, Isaac Redman, Will Allen, Ryan Clark, and Chris Carter. All starters. All left the game injured last night. It’s only a matter of time before Troy Polamalu slips in the tub shooting one of his Head & Shoulders commercials. Oh — he’s already sitting out? Never mind. Coach Tomlin may want to consider forfeits. They don’t hurt nearly as much.

Over/under 23,716.5: Chiefs fans who will cheer when Honey Boo Boo child develops a debilitating tapeworm infection during the season finale

Note to David Blaine — if you’re planning a death-defying escape and are looking for a support group, stay as far away from Narrowhead Stadium as possible.

750,000/1: odds that any team in NFL history other than the Cowboys has ever had two punters on the injury report the week after a bye

I’m not even going to research this. It’s too depressing. I know my Bad News Boys are all alone in this bizarre category. Bring back Danny White!

Over! I think this bet was locked down last week when Luck scrambled for a first down on third-and-7 while RG3 was getting his brain scrambled trying to turn upfield. Incidentally, both are currently listed at 5/4 odds to win rookie of the year. Smart money’s on the guy who plays like he’s going to last the season.

At this point, I don’t think even Madonna would bang that guy.

Over/under 6.5: minutes I experimented last night toggling back and forth between playoff baseball and the Thursday-night football game before giving up on the national pastime

Why is it that 22 gigantic men in pads can pick themselves off the turf, huddle up, and run a play in the same time it takes for a pitcher to gather and throw one pitch to home plate? Oh wait — I know why. Because football is the greatest sport ever created and we should get down on our hands and knees and kiss our flat-screen TVs every Sunday in appreciation …

2 million to one: odds that you will prefer Hulk Hogan’s actual sex tape to the Jimmy Kimmel Live version

I wonder how well Hulk’s 24-inch pythons get along with his 2.4-inch python. Ah — the wonderful world of steroids.