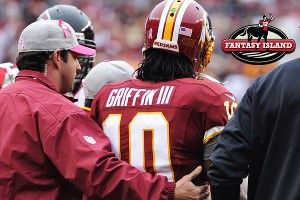 Here’s a scene that will play itself out in fantasy football leagues all over America this weekend:

Danny Amendola will pass the torch of “Next Great Caucasian Receiver” to Brian Hartline at halftime; Jordy Nelson and Eric Decker will have cameramen recording their reaction to the ceremony live, like when CBS shows the NCAA hoops teams whose bubble burst on Selection Sunday. I had to personally call the Rams’ front office to make sure I wasn’t misreading last week’s box score — it said Chris Givens led the team in receiving with one reception. That was a mistake, right? No? Daniel Thomas is a sneaky-good play in deep leagues. Even with all the Reggie Bush resurgence buzz, Thomas carried the ball 10 times last week and was able to find the end zone.

How bad could things get for the Chiefs offense with Brady Quinn under center? Here is the list of quarterbacks who Brady Quinn hasn’t been able to beat out over the course of his NFL career: Derek Anderson, Kyle Orton, Tim Tebow, Matt Cassel. That’s not a list of guys likely to end up in Canton … unless you mean the Canton Greyhound station.

Given Quinn’s turrible 5.4 yards per attempt over his career, we can probably expect that Dexter McCluster will catch about 73 balls against the Bucs. You can downgrade your expectations for Dwayne Bowe, or really any Chief who runs routes farther than a Brady Quinn shot put from the line of scrimmage.

Player to start: Brandon Weeden
Only Drew Brees has thrown more passes than Brandon Weeden. You can go ahead and look that up, because I know you don’t believe it. Efficiency is really important for wide receivers in fantasy football. For quarterbacks, not so much. Thus, the fact that Weeden is likely to toss the rock around 40 times on Sunday is more important than the fact that he’ll probably average around 7.0 yards per attempt (hey, that’s still 280 yards).

The Redskins without RG3 was like The Office without Steve Carell — nearly unwatchable. The Skins were well on their way to beating the Falcons when Griffin was left rattled by a shot near the end zone. Without him, the offense is severely limited, and the values of Alfred Morris and the receiving corps should be adjusted accordingly. Griffin says he will play this week, but if he is held out, then the Vikings D becomes a great play.

Adrian Peterson hasn’t scored a TD since Week 1, but that drought should end against the Redskins this week. The Skins also had tons of trouble with the speed of Julio Jones last week, so Percy Harvin, the one-man gang, could enjoy being covered by the gruesome twosome of Josh Wilson and DeAngelo Hall.

Baltimore is running on its defensive iconography — the Ravens are in the bottom third of the league against the pass and run. Tony Romo’s best statistical performance this season — the 300-yard, three-TD Giants opener — was forged in only 29 pass attempts. DeMarco Murray should get going early, and that balance will mean big fantasy days from the ‘Boys stalwarts. There’s no excuse for Romo to not leave M&T Bank Stadium with fat stats, and it won’t be your fantasy team’s problem when the Cowboys find a way to lose late. I buy Morris Claiborne as a shutdown corner (before the Bears breakdown he’d allowed seven catches on the season), but Devin Hester showed you can burn him deep, and that bodes well for Torrey Smith.

Kids, grow up and be a garbage man. Wrangle alligators. Be someone who catches poisonous spike balls. But do NOT, whatever you do, be a Cardinals running back. You WILL get injured and your season WILL end early. The Cards ran 63 pass plays against the Rams last week, even while watching their offensive line break down, because they have ZERO running options. Kevin Kolb suffered 17 sacks inside of five days because they don’t have a viable handoff option. On the bright side for the Cardinals this week, though, the Bills defense has given up 550-plus yards of offense for two consecutive weeks. This game is a no-brainer. Cards = pass-heavy offense. Fitzgerald and Roberts = play. Consider Early Doucet too in deep leagues.

I’m going to send Shane Morris an offer for Johnson in the Fantasy Island league. Right now, I’m offering an Oak Ridge Boys 8-track and a half-used tube of piña colada chapstick that I found at a Greyhound station.

Quarterback is deeper than we thought because rookies are trusted with open playbooks and dominant D is in fashion. It’s an opportune moment to move Tom Brady for quality depth, grow a soul patch, and ride with Chili’s menu connoisseur Kevin Kolb. I’m happy that Pete Carroll’s speedboat escape from Los Angeles has brought him happiness, but he fields an offense unworthy of neon. Still, the Pats are elite against the run and famously isolate and decay the biggest opposing threat (Marshawn Lynch). New England’s secondary ranks 30th; Sidney Rice will make moves.

Roddy White finally had a bad week! Don’t expect another one, though. The Raiders have a terrible pass defense, so hopefully (because I own Michael Turner) Matt Ryan, Julio Jones/Roddy White, and Tony Gonzalez will rack up a lot of points early and then Turner will get the ball and a bunch of his own late. One amazing thing though — Ryan and Jones were totally locked in last week, which gives context to how amazing it is that Gonzalez STILL had 13 catches and a TD. He is just getting better and better this season. Chelsie Hightower, start warming up!

How many times in the past week do you think Rex Ryan has updated his LinkedIn profile? I feel like the owners around the league have been getting a steady stream of e-mails like, “Rex Ryan wants to connect with you on LinkedIn” and “Rex Ryan has added new skills to his profile: Defensive Coordinating, Press Conferences.”

The usually stout Jets defense is a dumpster fire at this point. They’re giving up more than 140 yards per game to opposing running backs. That won’t help Donald Brown owners, but it will help anyone sneaky enough to have picked up Vick Ballard earlier in the week. Ballard could see about 15 carries per game during Brown’s recovery from a knee scope, while the Colts will rely on Mewelde Moore in the passing game.

Don’t give up on Detroit. Matthew Stafford averages 322 passing yards a game, and Mikel Leshoure is the answer at running back. The Lions defense is an encouraging 10th against the pass and 13th against the run — even after that bizarre high-scoring overtime loss at Tennessee. Don’t give up on Philadelphia. LeSean McCoy is the league’s most explosive receiver out of the backfield, and while Mike Vick may now be a predictable West Coast pocket bro who rarely runs these days, the yardage is there. Philly’s defense is top-flight. Turnovers have undone both campaigns, and this game should be sludge — going forward I’m still on-board the bandwagons.

If the Broncos continue to fall behind early every week, Peyton will continue to be a fantasy payoff. Everyone’s a beneficiary: Demaryius Thomas is the no. 1 option. He had 188 yards last week (although he’s averaging one fumble per game in the past three), Joel Dreessen and Brandon Stokley both had TDs, and Eric Decker had eight targets. Willis McGahee is the no. 1 back, but loses the ball a lot and didn’t perform well during the comeback. He tweeted an apology to his fans and promised to work harder, though, so I assume he will have an EXPLOSIVE WEEK! He promised to work hard!

About Last Weekend: Down Goes the Captain