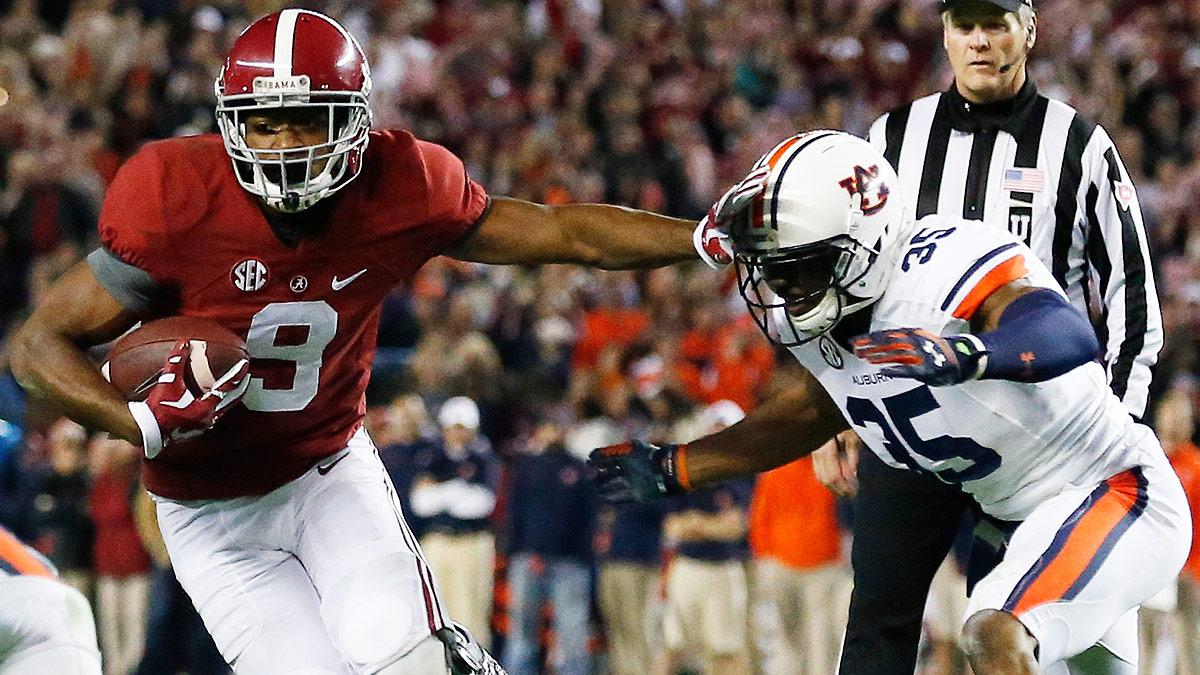 Celestial Recalibration of the Week: Plate Tectonics, or Nothing New Under the Sun

So after all that — ALL THAT — we’ve got a top-ranked Alabama team, and an undefeated Florida State team, and Boise State out in front for the chance to represent the Group of Five in a big-money bowl game, and rekindled hopes for a Bama-Oregon bowl matchup that will find some way to get dashed on really big rocks in a hurry. We’ve been here before, and we know which way the wind is blowing.

The threads of the 2014 season have twisted together to form a fearsome creature with the head of a dragon and the tail of a possum. Eons from now, this will be mistaken for a fossil remnant, and schoolchildren will be quizzed on the particulars of the descendants of Tuscaloosa and Eugene winding up on separate continents.

We don’t have a great deal of personal regard for the Heisman, but people sure do seem to like getting Heismans, so can we please bump Amari Cooper up on all available lists for that thing now? Can this week — the one following his second 224-yard receiving game, his third 200-plus-yard performance, and seventh triple-digit receiving total of the season, and the week in which Alabama’s offensive performance was so good it made Alabama’s OC’s former players openly jealous — finally be that week?

And while we’re griping about the Heisman and pretending that all players from all positions are under consideration for it, can we acknowledge that leading the country in forced fumbles and tackles for loss is an admirable endeavor and stick Arizona linebacker Scooby Wright in there somewhere?

Bo and Nebraska both seem like they’ll be a lot happier with Bo not being at Nebraska anymore, but we have two wishes to send after him as he heads out of Lincoln for good: that he retains his too-rare candor wherever his career path winds next, and that wherever his next spring game might be, a cat-in-arms makes an appearance.

Bo Pelini held up a cat in front of a screaming crowd and it respected him too much to pee and poop on him. Hire this formidable man.

Honorable mention: Would now be a good time to mention that Bill Clark just got UAB bowl eligible for only the second time in program history? It would, right?

Graven Idols of the Week

Imaginary Edition: On this blessed anniversary, let us dream together of making and selling an Advent calendar in Columbus, Ohio, only it’s for November, and behind every little window there’s a tiny photo of Marcus Hall flipping double birds.

Real Thing Edition: The thing we love the very most about the Big Ten is that phrases like “dramatic ending for Old Oaken Bucket” represent perfectly normal patterns of speech.

Real Thing That Shouldn’t Be Edition: The Outback Bowl has a new trophy, and is it a Tiffany-created Bloomin’ Onion? It is NOT. Get right out of here with your “The trophy is made entirely of crystal and because of the bowls [sic] Australian themed title sponsor it includes a boomerang attached to a beveled base capped-off with a faceted football on top,” if you please.

You tried. This sticker is your only recompense.

In the micro: Florida State was supposed to go in this spot, but here’s the thing. Despite this being a believable behind-the-scenes story line for the 2014 Seminoles, despite Jameis Winston playing like a spinning top in reverse, and despite the desertion of their unruffled injury-free lucky streak of 2013, this team could still win the title, again — and that’s better than being awarded a cartoon picture of cute produce with some adhesive on the back (probably?). If you don’t like it and play for one of the Noles’ opponents, well, try beating them next time. If not, well, you’re even more out of luck.

Instead, one scratch-and-sniff fruity medallion is hereby affixed to the foreheads of the Northwestern Wildcats, whose fans are understandably reeling when looking in the rearview mirror at this season.

Want to get someone to pee themselves laughing? Get a time machine, return to August: "You'll beat ND, Wisc, and PSU. And you'll be 5-7."

In the macro: to the NCAA, which is attempting to deny first-year Sun Belt member and freshly minted Sun Belt Conference winner Georgia Southern access to a bowl bid, on account of Rules Are Rules. The school is currently appealing the waiver denial; as of Sunday night, the results of that appeal had not been announced. The Eagles are 9-3 and undefeated in league play in their first season of FBS competition, and the world is run by the worst kind of hall monitors.

Was that Emory & Henry or just terrible?

Truly, the defining philosophical conundrum of our time.

Bad Buzz: What’s Wrong With the Hornets and How They Might Fix It