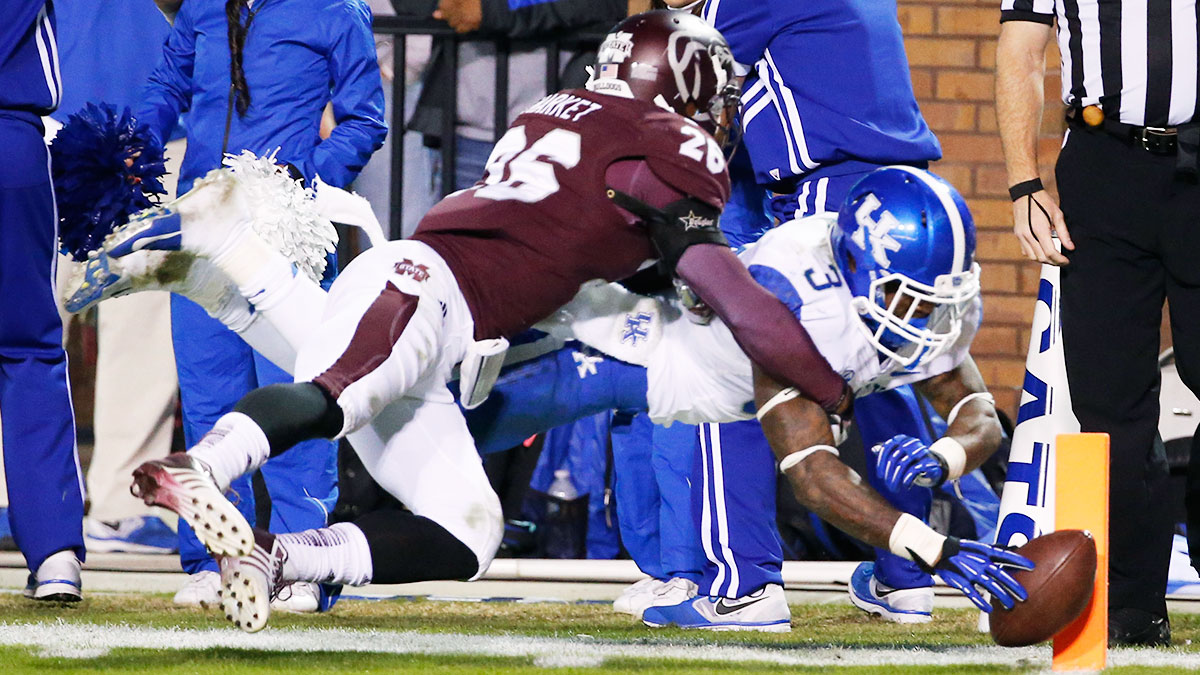 We’re heading into the back half of the season, and both major Mississippi teams are undefeated and ranked in the top three. No. 2 Florida State is on a bye this week. Marshall, the fourth undefeated FBS squad, is hosting Florida Atlantic. It’s either Magnolia State football or leaf-peeping this weekend, folks.

The game: No. 1 Mississippi State at Kentucky

How to watch: This dog-on-catfight commences in Lexington at 3:30 p.m., with television coverage on CBS.

Story line: Mississippi State football is a force to be reckoned with, which is still fun to think about. And now Kentucky is ascendant! Not to say this is going to turn into some kind of unexpected barn burner, given how the Cats staggered around against LSU last week. Still, not too long ago the thought of expending valuable Saturday viewing hours on either of these teams would’ve been laughable, and now one is set up for a run to the playoffs while the other could emerge as a top-tier team in the disarrayed SEC East before too long. The carousel of progress!

How to watch: The Trojans and Utes kick off at 10 p.m. in Salt Lake City; be there or be in front of Fox Sports 1.

Story line: Veteran Travis Wilson regained the starting quarterback job from Kendal Thompson this week, but other than that passing familiarity, it’s still hard to get a good read on the Utes. That should change in a hurry; this is the first of three consecutive games against currently ranked conference opponents, continuing next week at no. 14 Arizona State and followed by a visit from no. 6 Oregon in Week 11.

How to watch: It’s probably already too late to get a good tailgating spot anywhere near Baton Rouge, right? Television coverage begins at 7:15 p.m. on ESPN/WatchESPN.

With another #FunBeltTuesday in the books — and if you skipped out, did you ever miss another Red Wolves special teams burlesque — we turn our attentions to a loaded Thursday-Friday slate:

Ducks-Bears is the obvious draw here, but don’t overlook another chance to see the Pirates operating on national television.

Highlights from a sparse Week 9 undercard.

No. 22 West Virginia at Oklahoma State (3:30 p.m., ESPN/WatchESPN): Dana Holgorsen was a popular hot-seat choice this preseason; following last week’s upset of then fourth-ranked Baylor, the Mountaineers are in the Top 25, and all is merry in Morgantown. Bounceback aside, there aren’t many places trickier to pull out a road win than Stillwater.

South Carolina at no. 5 Auburn (7:30 p.m., SECN/WatchESPN): The Tigers had a week off to recover from being Mississippi State’s latest quality win, and they travel to Ole Miss next week, making the Gamecocks look like one hell of a chicken sandwich.

No. 14 Arizona State at Washington (10:45 p.m., ESPN/WatchESPN): The Sun Devils have lived a near-perfect microcosm of the 2014 Pac-12 experience, haven’t they? Suffering a horrific home loss to UCLA, having a backup quarterback toss a game-winning Hail Mary at USC, and scoring more points against Stanford (26) than any team has managed all year? The Territorial Cup is already hovering near the top of our must-see list for rivalry week.

What rivalry spiciness is in store for Week 9? Oh, tons. Michigan visits no. 8 Michigan State (3:30 p.m., ABC) for what should be a fun family gathering (like that time your little brother was bitten by a mysterious creature on a camping trip, turned into a werewolf, won a Rose Bowl, and got halfway through the next season seemingly poised for a repeat trip to the conference title game — hate when that happens). No. 4 Alabama heads to Tennessee for the latest installment of the Not-Third Saturday in October (7:30 p.m., ESPN2/WatchESPN), and we’re already so queasy over the shrieking about the reunion between the Vols’ former moppet-coach and the team he scorned that we will instead be focusing all of our coverage on Kenyan Drake’s oatmeal crème pie delivery apparatus. Wyoming and Colorado State renew the Border War in Fort Collins (7 p.m., Root Sports/Mountain West Network), a game we’re always interested in because of the involvement of a metal-dipped boot. And Georgia Southern meets Georgia State in Atlanta (2 p.m., ESPN3) for a game that, if these teams know what’s good for them, will determine who gets to be called “GSU” for the next calendar year.

Where might things get real weird? No. 15 Arizona travels to Washington State in a game that somehow doesn’t involve a 10:45 start time, but will surely involve gobs and gobs of yardage and sore throwing shoulders on the parts of Anu Solomon and Connor Halliday.

Connor Halliday has thrown 101 more passes than the player with the second-most attempts in FBS. And that player has played one more game.

On the off chance you’re just really into leaf-peeping:

The Tom Kurvers Trade: One Deal, One Million Repercussions

The J.T. Barrett Bubble: Ohio State’s Freshman Quarterback Breaks Out As the Buckeyes Try to Break Back In