College Baseball Preview: A Team for Every Fan — Including Those Who Don’t Yet Know They’re Fans 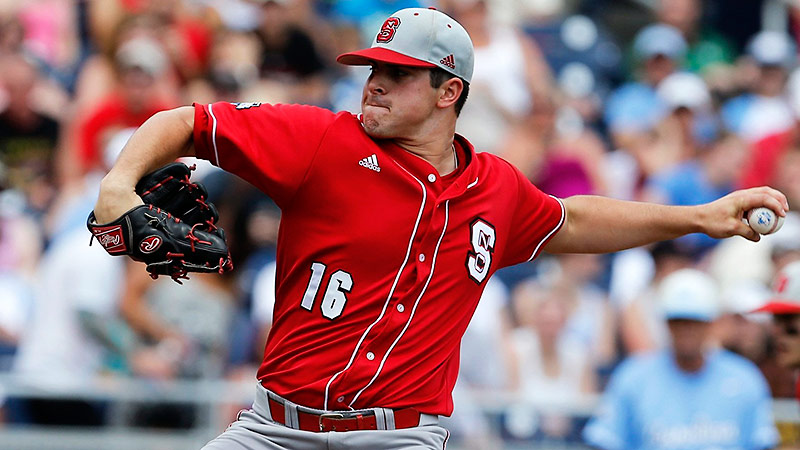 [Cue 30 for 30 music.] What if I told you we were mere moments away from meaningful, regular-season baseball …

Well, it’s true! While the masses huddle around their computers in mid-February, squinting at images of major leaguers playing long toss, the savvy fan can watch games that actually count. The college baseball season starts today, and you should get in on the goodness.

I could write a book explaining why college baseball is worth your time. Since the 2014 season is here, however, there’s no room for a drawn-out breakdown of the sport’s merits. But I care. I want you to be informed and feel invested, so I’m giving you a hybrid season preview and sales pitch. If you’re not already rooting for a particular team, here’s a list of reasons to start following the sport, plus suggested schools to adopt.

If You Love the Unexpected: Indiana Hoosiers

The Big Ten doesn’t produce much good baseball, and it’s not hard to figure out why: By the time MLB fans are complaining about freezing and wet Opening Day conditions, B1G teams have already been playing for two months. Baseball isn’t even a varsity sport at Wisconsin, and no Big Ten team has won a national title since Ohio State in 1966.

Last summer, though, Indiana became the first Big Ten team to make the College World Series since 1984. The Hoosiers are favored to return to Omaha this year, thanks to catcher Kyle Schwarber, one of the big power-hitting prospects in this year’s draft, and fellow preseason first-team All-American Sam Travis, who chipped in 10 home runs and 22 doubles of his own last year.

If You Love Prospects: NC State

No team has a better pair of pro prospects than the Wolfpack. If you enjoy the fizzing sensation you get watching Kansas basketball teammates Andrew Wiggins and Joel Embiid play together, knowing you might be watching the top two picks in the next NBA draft, you’re going to love Carlos Rodon and Trea Turner.

The best way to describe Rodon is to say he’ll be on the mound for the Houston Astros the next time they play in the postseason. He’s big, he’s left-handed, and he throws hard with a plus slider. He’s the archetypal power lefty, and barring injury or some other unexpected calamity, he’s going to be the top pick in the draft.

Turner, who plays above-average defense at shortstop, is one of college baseball’s fastest players, and perhaps its best base stealer. He hit .368/.455/.553 last year, and while his speed certainly helped him increase his hits total against lower-quality defenses, it just takes one look at a top MLB prospects list to know that any competent defensive shortstop who can swing a bat without hurting himself is considered a potential All-Star nowadays.

If You Love Fun: Mississippi State

To me, college baseball’s appeal is partly prospect hipsterism, partly the fact that my alma mater South Carolina is really, really good, and mostly what makes Mississippi State so compelling: the Bench Mob. The Bulldogs, last year’s national runner-up, won hearts and minds in 2013 because every player who wasn’t on the field was on the top step of the dugout, doing coordinated dance routines, turning his hat inside out, and swinging from the roof.

At its best, college baseball is played at a high level by kids who look and act like the people we know. These kids wear their emotions on their sleeves, and no team represents that better than Mississippi State. These Bulldogs are equal parts 2004 Red Sox, Eastern European soccer hooligans, and high school marching band.

Mississippi State is also worth watching for some Actual Baseball Reasons. The Bulldogs have the best bullpen in the game, which matters a great deal given today’s scheduling and pitcher usage patterns, and they boast slugging first baseman Wes Rea, who is the Island of Dr. Moreau hybrid of John Kruk and Nikola Pekovic.

If You Love Atmosphere: LSU and South Carolina

Football reigns supreme at 12 of the SEC’s 14 schools, minimum. In late winter and early spring, though, several of those schools pour their residual athletic insanity into baseball instead. Five SEC teams drew better than 7,000 fans per game last season, led by LSU, which averaged 11,000. (As a point of comparison: The Tampa Bay Rays drew 18,645 fans per game last year.) The Saturday game of last year’s South Carolina–LSU series brought in nearly 13,000 caterwauling Louisianians.

Given the teams’ recent quality of play, the high interest is no surprise. Two years ago, LSU boasted pitcher Kevin Gausman, who’s now an Oriole and one of MLB’s top prospects. Pitcher Aaron Nola, who beat no. 3 overall draft pick Jonathan Gray in an exquisite pitchers’ duel in last year’s NCAA tournament, will likely be a first-round pick this June and on the fast track to an MLB rotation shortly after that. Shortstop Alex Bregman is already one of the best position players in the game as a sophomore and will likely go near the top of the 2015 draft.

South Carolina, meanwhile, won back-to-back titles in 2010 and 2011, was the national runner-up in 2012, and missed another trip to Omaha by inches last season in what was supposed to be a rebuilding year. The Gamecocks should be back in the national-title hunt this year behind All-American catcher Grayson Greiner, who headlines one of the game’s best defenses despite having Ryan Madson’s body and Rube Baker’s issues with getting the ball back to the pitcher. There’s also Joey Pankake, a real third-base prospect who doesn’t even come close to having the most ridiculous name in college baseball.

Much like college football and basketball, college baseball is a little more unpredictable and varied in styles of play and strategy than its professional cousin. Having some 300 teams from which to choose creates incredible geographic and aesthetic diversity. So don’t be the desperate fan who settles for spring training scrimmages and batting practice. There’s a better way to bridge the gap before the MLB season arrives, and it starts today.

Worst! How NFL Teams Pull Themselves Out of Contract Hell

What Happens When College Basketball Rivalries Reach the Pro Ranks?