Worst! How NFL Teams Pull Themselves Out of Contract Hell 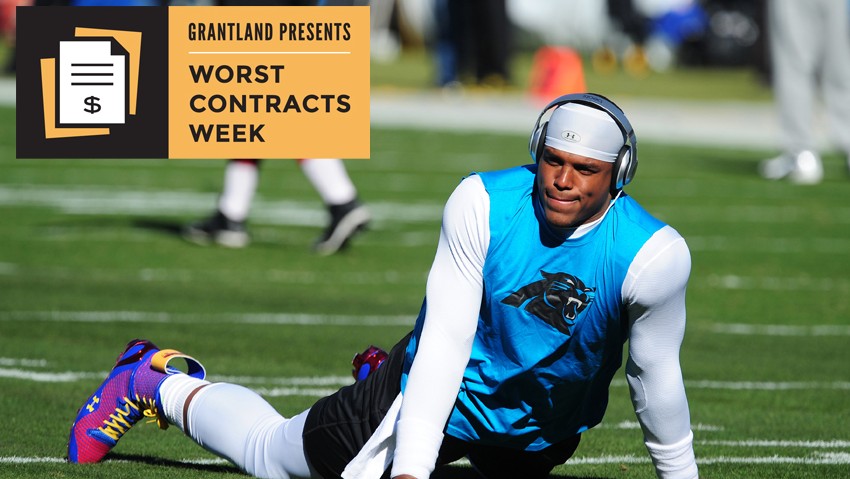 This offseason should have been a joyous one for Panthers fans. Richard Sherman was probably right when he said the NFC Championship Game was the actual championship game, but outside the NFC West, Carolina seemed to have a better Team of the Future case than anyone. The day before the Super Bowl, the Panthers’ Riverboatin’ leader was named Coach of the Year, and their 22-year-old Clark Kent–inspired middle linebacker was voted the top defender in football. Coming off a 12-4 season, outfitted with one of the league’s best defenses and Cam Newton under center, optimism should be the dominant feeling in Carolina these days. Sadly, it doesn’t always work that way.

A few days after Carolina’s postseason run ended with a respectable showing against the 49ers, the questions about David Gettleman’s next couple months began. Gettleman spent 15 years with the Giants before coming to Carolina, where he was named the general manager early last year. The first order of business for both him and the Panthers this offseason is Greg Hardy, who finished 2013 with a career-best 15 sacks — good for the third-best total in the NFL. Retaining a dominant 25-year-old pass-rusher seems like a prudent move for any team, but when asked about Hardy, Gettleman’s approach was notably cautious. He referred to him as “a piece of the puzzle” and noted he would be just a part of the Panthers’ offseason plans. It was in explaining those plans that Gettleman not-so-subtly pointed out how not all general managers are on equal footing when trying to build or keep together quality NFL rosters. “Good Lord willing and the creek don’t rise, we’ll be out of [salary-cap purgatory] in two years,” Gettleman said. “Everybody lets players go. There isn’t a team in this league that hasn’t let a big dog walk out the door.” In a 35-minute conference call with reporters, Gettleman alluded to the Panthers’ salary-cap troubles five times.

The questionable decision-making of former Panthers GM Marty Hurney isn’t a new topic. It’s just that now Hurney’s choices have gone from limiting Carolina’s present to obstructing its future. This situation is obviously more complicated than Gettleman cleaning up the mess left by a previous regime. The best players on the Panthers’ roster last year were draft picks made by Hurney. That includes Hardy, who was taken in the sixth round in 2010. Still, there are plenty of teams — including Cincinnati, Green Bay, and Super Bowl champ Seattle — whose salary-cap health has allowed them to retain homegrown stars when the time comes. Gettleman may not have that luxury.

Any conversation about Carolina’s cap troubles starts with Hurney’s love of running backs. Considering Chris Johnson is almost certain to be cut by the Titans, the Panthers will have two of the top 10 cap hits for running backs in 2014 with DeAngelo Williams and Jonathan Stewart. Only the Vikings will give out more money to running backs in 2014.

There are troublesome deals elsewhere on the roster. Charles Godfrey is due $7.1 million this year after missing most of last season because of injury, and although Charles Johnson is a good player, he shouldn’t be the third-highest-paid defensive end in the league. But some of the worst damage comes when you move past Carolina’s current crop of players. Having 26 free agents come off the books helps, but the Panthers owe just $106.2 million in active salary, the seventh-lowest total in the entire league. Carolina’s nearly $18 million in dead money, though, is no. 1 by a comfortable margin. In 2014, the Panthers will pay Jon Beason and James Anderson — both whom spent 2013 employed by other teams — a combined $10.8 million. That’s more than three times what Seattle’s starting trio of linebackers will make.

Thanks to a provision in the 2011 CBA that allows teams to carry over the previous year’s cap space into the following season (another shrewd move by Gettleman, knowing his bigger commitments would come in 2014), the Panthers have about $15 million in cap space to work with in the coming months. That seems like a decent number until you realize the franchise tag for Hardy would be close to $12 million and Carolina has more free agents to lock up than just about any team in the league. Factor in the inevitable Newton extension that Gettleman needs to consider, and it makes sense why he would be quick to remind everyone the situation he’s in right now. Even for a team as young and talented as the Panthers, continued success in the NFL isn’t linear. Quick turnarounds are great, but without the ability to maintain the roster that led to that turnaround, sustained winning becomes a real challenge. Without players like Hardy (or fellow free agent Captain Munnerlyn), the Panthers would likely take a step back next year, but to call that Gettleman’s doing would be unfair.

The lesson here is that patience is important when it comes to new regimes. Late last year, rumors were swirling that Raiders GM Reggie McKenzie might be on his way out of Oakland. That tends to happen when a team wins eight games in two years, but putting that at McKenzie’s feet is ridiculous.

When McKenzie took over in Oakland in January 2012, he was taking charge of a team that was $26 million over the salary cap and without its first-, second-, and third-round picks in that year’s draft. The lack of draft picks was the result of the Carson Palmer trade from the previous season, when the Raiders decided they were a team close enough to success to trade a first- and second-round draft pick for a 31-year-old quarterback.

The Raiders’ salary-cap situation was still a disaster this season. Palmer and Richard Seymour, both long gone, were two of the three highest-paid players on the roster. The Raiders had a truly incredible $56 million in dead money on their cap. Almost half the money they could spend on players was going toward people not actually playing for the Raiders.

After two years in charge, 2014 will really be the first time McKenzie has a full collection of tools with which to work. The Raiders have more than $60 million in cap room, with plenty of young pieces available to start retooling their roster. They also have a (mostly) full slate of draft picks, including the fifth overall. There’s no telling if McKenzie will make all the right moves with his newfound freedom, but he should at least be given the chance. Handing the franchise over to someone else just as McKenzie has cleared the books is almost cruel. 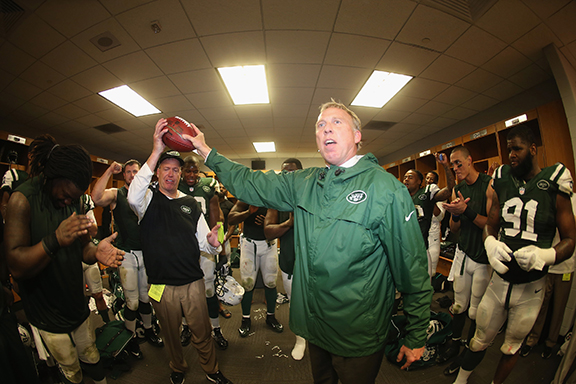 John Idzik found himself in a similar scenario a year ago. The new Jets general manager took over a roster more than $25 million over the salary cap in 2013. Even after making significant cuts, the Jets were still just $5.7 million under the cap. Their salary situation was such that re-signing Darrelle Revis was next to impossible, and he was shipped to Tampa Bay in exchange for a first- and third-round pick. Idzik still has some cuts to make this year (Santonio Holmes and Mark Sanchez, specifically), and with them, the Jets should have close to $25 million in room.

Having cap room doesn’t necessarily mean using it to dole out big-money contracts, though. The Dolphins had plenty of room last offseason, and they’re a good example of a team that used it in a way that doesn’t make a lot of sense. Both Philip Wheeler and Dannell Ellerbe got multiyear deals and were below-average linebackers in 2013, and Mike Wallace is already a candidate to have his deal restructured. His $17.25 million cap number is the highest in the league following Larry Fitzgerald restructuring his contract.

The Colts made a similar collection of moves last spring. It’s hard to fault them for going after Gosder Cherilus, considering how decimated their offensive line was in 2012 and what Andrew Luck means to their success. Long-term deals for Erik Walden, LaRon Landry, and Ricky Jean-Francois are less defensible. All teams have to meet the salary floor outlined by the new CBA, but there are ways to meet those requirements while signing players to short-term deals and saving the guaranteed money for star free agents or for locking up your own stars when their deals come up.

The perfect example — as they are for most things right now — is the Seahawks. Seattle’s signings last offseason included Michael Bennett (one-year deal), Cliff Avril (two-year deal), Tony McDaniel (one-year deal), and Clinton McDonald (one-year deal). The only long-term contract John Schneider handed out was to Kam Chancellor, and that one already looks like a good move. With Seattle’s projected cuts this spring, it should have more than $20 million in cap room, and it should have enough money next year to figure out contracts for Russell Wilson and Richard Sherman.

In just about every mention of the Seahawks’ model, Wilson gets mentioned as the reason it’s possible. Because Seattle pays its quarterback a paltry salary, the Seahawks are free to use their money other places. The Panthers aren’t quite in that situation (Newton made just more than $6 million in 2013), but they are a team with a new-CBA quarterback on his rookie deal and a star defensive player also in the middle of his relatively friendly first contract. That should be enough to ensure that this year’s 12-4 season was just the beginning. But we’ve learned that in the NFL, the sins of a previous regime are enough to spoil even the most promising futures.

Love Knows No Offseason: Valentines From the Football Bowl Subdivision

College Baseball Preview: A Team for Every Fan — Including Those Who Don't Yet Know They're Fans