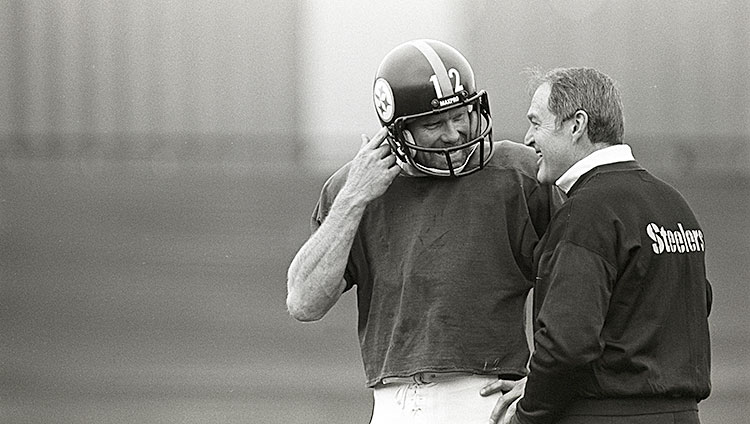 Chuck Noll, the architect and leader of the 1970s Steelers’ dynasty, died at his home in suburban Pittsburgh on Friday night. He was 82 years old.

Like most NFL fans still in their twenties, I knew Noll mostly from watching NFL Films and the kind of basic research that’s obligatory when someone is considered one of the greatest coaches the game has ever seen. It may have been the timing, but as I learned more about Noll in the past couple of days, I kept thinking about how much he sounded like Gregg Popovich — or, maybe, how much Gregg Popovich sounded like Chuck Noll.

Both were born near the banks of a great lake, in a state famous for the sport each would eventually master. The first draft pick of Noll’s head-coaching tenure was Joe Greene. Popovich’s was Tim Duncan. Like Pop, Noll was a wine lover. He also didn’t have much patience for TV cameras. Each helmed his franchise for more than 15 years.

Both were also, despite their prominence, relatively unknowable. “It’s just my nature,” Noll told Paul Zimmerman in 1980. “I’ve always been that way. I’ve always avoided publicity. I’ve never been good copy at any stage of my life. I don’t strive for it, because I don’t think it’s important whether I’m good copy or not. The two can go together, if that’s your personality, but every person on this earth is unique. I’ve never tried to pattern myself after anybody. You have to be what you are, and this is what I am.”

He was also one of a handful of coaches to become synonymous with his franchise, one of those coaches who was a symbol for the values and style of a decade’s worth of teams. No matter how little people knew about Chuck Noll, they still knew he was the Steelers. And that said enough.

Noll didn’t like words like “winner.” Players won, he said, and that’s at least partly true. There was no shortage of talent on the ’70s Steelers. The team that beat Dallas in Super Bowl XIII had eight players eventually make the Hall of Fame: eight. As we learn over and over again, though, how several players succeed in a certain place is inextricably linked to that environment. Joe Greene probably would have been Joe Greene anywhere, but there are plenty for whom a home with Noll made all the difference.

That’s because instead of “winner,” Noll’s preferred term was always “teacher.” He had his own set of instructors coming up. Noll had a short-lived NFL career, but he spent it playing for Paul Brown in Cleveland. There are worse influences. Brown also coached Don Shula and worked with Weeb Ewbank, coach of the Colts for back-to-back championships. After his playing career, Noll took a job with the AFL’s Los Angeles Chargers under head coach Sid Gillman, generally considered the father of the modern passing game. Gillman has his own pretty decent coaching tree.

From his first season as the head coach in Pittsburgh, Noll had established his message: His teams would block, tackle, and hit better than whomever they happened to be playing. The Steelers went 1-13 in his first season. By his fourth year, Pittsburgh was 11-3. It wouldn’t finish below .500 for another 12 seasons.

The phrase most often linked to Noll in the past few days is “Champions do the ordinary things better than everyone else.” Hearing that, and watching the Spurs this past week, is what made me link the two. Really, though, it’s what links all great coaches — the ability to define those little things, and to mend the tiniest cracks most coaches don’t even know exist. That sort of coach is the rarest kind.

Men in Blazers: Mourning England and Celebrating the USA From Rio