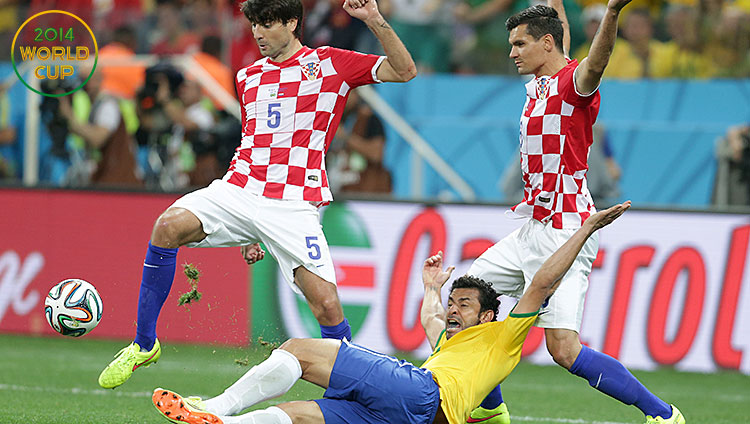 On the FX show Fargo, there is a poster tacked to the basement wall of hapless insurance agent Lester Nygaard’s home. It features a school of fish. All of them are yellow, except one, which is red and sits right in the middle, a Swedish fish trying to pass as real. Above and below the fish, there’s a message: “What if you’re right — and they’re wrong?”

This poster was made for Lester, the kind of guy who feels guilty when he watches American Idol and doesn’t cast a vote. But unlike Lester, who aspires to be the Swedish fish, that poster also describes a specific element of the sports machine, one that takes that message as doctrine, one that already IS the candy, and knows it: the refs, the officials, the men and women who are, by dictate of the rules of the game, always right, even when they are very, very wrong. This, by nature, is frustrating: When someone else is wrong, and you are right, it makes you want to drink a fifth of Old Overholt and go fight your parked car. And in only its first few games, the World Cup has not disappointed in terms of supplying frenzied fans with reasons to voodoo-doll referees until they run out of safety pins.

There’s another side to these stories, though. There always is. And that’s the side that benefits. If you’re Brazilian, watching Neymar’s penalty ricochet in after Fred’s dive in the box, you can’t apologize for the refs blessing you with good fortune. No: You’ve got to own it. Here’s a step-by-step guide for how to behave when this fan is you.

After watching their teams benefit from a blown call, most fans’ first mistake is to try to rationalize what just happened. They claim that, if you look closely enough, you’ll see Fred actually did get jostled by the Croatian defender, right there, on his upper arm — there was contact, dammit, and the wind is blowing east, and Fred’s name is Fred, so, like, how could you not call that a penalty? Don’t be this person. Everyone knows you’re lying, and everyone knows that you know you’re lying; you’re insulting their intelligence.

After the call, once you’ve had enough time to steep in the beautiful, illicit pleasure of what just happened, you must descend deep into the eddies of thought. Visibly consider the scenario. Say you’re not sure about what you just saw. Then, gradually, as though exiting the woods of your own conscience, confess that, wow, they’re right — that referee’s a joke. Make it look like a journey, like you had to overcome some tangible roadblock in your heart to reach this conclusion with your mind.

Say you’re sorry. You’re the winner right now, and if you win graciously, you’ll see the dividends later — whether it’s when the opposing team finally overcomes the refs’ mistakes, like Mexico did after losing two goals to phantom offside calls against Cameroon, or sometime in the murkier future, when you have to be a human being again, doing human-being things with the other human beings you were watching sports with.

Your apology bought you a little time. Laugh. Indulge in the thrill of being blessed by the gods, in having French-kissed Lady Luck in the backseat of your mom’s Subaru. Don’t laugh hysterically, because then you look insane and cruel, undoing your gains. Instead, have a good, solid chuckle; appear to be tickled by the strange tap dancing of fate. On the inside, pretend you’re playing dice with the Devil and you just rolled snake eyes, or whatever gets you jazzed.

STEP 5: Don’t Mention It Again Until the Game Is Over

You can be sure the people you’re watching with, or Twitter, or the media in general, will make a huge deal of what just happened. It isn’t up to you to push the narrative along; in this scenario, you’re parrying blows, not attacking. Don’t gloat. Yet.

Once the result is secure, don’t let the asterisked nature of what just happened take away from the satisfaction you get from a win. Don’t apologize for this; it isn’t your fault, you say, that the refs aren’t fit to direct foot traffic in a park. You still can’t believe how well Neymar moves in open space. Are you seriously saying Neymar didn’t deserve to score in that game? NOW WHO’S BEING UNREASONABLE?!

AND THE FINAL STEP: Use the Botched Call As Proof That You Are God’s Elect