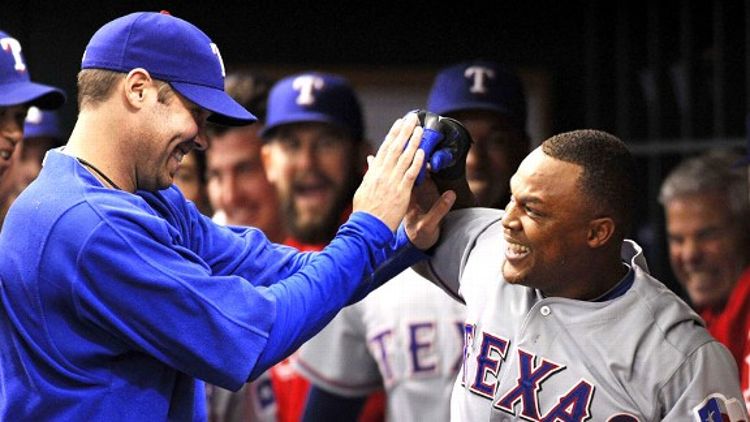 Four games, one jam-packed day of ALDS action. Here’s what went down in the early games (check back this afternoon for the late games):

In leading the Texas Rangers to the ALCS with the seventh three-homer game in MLB playoff history, Adrian Beltre staged a one-man redemption tour.

He hasn’t always had the best reputation. In 2004, Beltre posted one of the best seasons by any hitter in the past decade, hitting .334/.388/.629, slugging 48 homers, and playing fantastic defense with the Dodgers. That home run total more than doubled his next-best season, leading some skeptics to wonder where that power outburst came from, especially given the era in which he played. Even putting aside those doubts, Beltre still became the poster boy for that old question: Do players perform better in contract years? There’s no question that Beltre’s monster season right before free agency paved the way for the five-year, $64 million windfall he’d get from the Mariners that offseason. The half-decade that followed in Seattle was a tough one: Beltre continued to play all-world defense, and hit for pretty good pop considering Safeco Field might be the worst stadium for a right-handed power hitter to call home. But he never came close to matching that surreal ’04 season.

When Beltre signed a one-year deal with Boston last offseason, he hoped to play for a winner and also strafe the Green Monster often enough to impress suitors and earn one more big deal. The Sox got a hell of a deal, landing a seven-win player (.390 wOBA, killer defense) for the cost of a two-win player at one year, $10 million. He even became a one-man meme, filling the Internets with delightful .gifs marking his strange aversion to head rubs.

But … the narrative! Where was the narrative? Soulless statheads like me had quietly started lobbying for Beltre as a future Hall of Fame candidate, someone who, with three more productive seasons, would reach a level worthy of induction. There wasn’t much enthusiasm for that stance, not from a player perceived as a one-hit wonder who suddenly decided to try seven years ago just to get a big contract. Not from a player who lacked that signature moment that the masses love to see. Well, you’ve got one now, chico. It didn’t seem possible for the loaded Rangers to dramatically upgrade 2010’s already loaded lineup. But they did, bagging Game 3 hero and regular-season assassin Mike Napoli and Beltre, adding 68 runs and an unimpeachable third-base glove in the process.

This is what you can do when you parlay unprecedented playoff success and one of baseball’s most fruitful farm systems (Alexi Ogando crushed the Rays out of the bullpen and makes baseball’s deepest bullpen even deeper, and deadlier) and some spectacular trades (Matt Harrison, one small piece from the Mark Teixeira heist, struck out a career-high nine batters in just five innings, inducing 16 whiffs on 97 pitches) into massive revenue spikes. You win, you make money, you spend money, you make more money. Fear the Rangers now, fear them later. They’re going to be World Series contenders for a while.

As for the Rays? They boast the same bountiful farm system and the same stacked management team (even if Andrew Friedman were to leave at some point, the stable of savvy talent evaluators runs deep in St. Pete). But no matter how many times they shove great teams on shoestring budgets into the postseason, they can’t do much for their revenue picture. After yesterday’s loss, owner Stuart Sternberg expressed frustration over the Rays’ attendance woes (second-to-last in MLB this year).

He’s already getting whacked for it today, with the usual criticisms — how can he be so insensitive to an area devastated by a terrible economy, how can he ignore the brutal commute to the ballpark, lack of local infrastructure and lack of team history, how can he lob these grenades so soon after the end of a magical season — raining down on him. Those criticisms all have merit, and the Rays certainly aren’t going broke, not with team-to-team revenue sharing and MLB’s central fund tossing $80 million or so into their coffers every year before the first fan strolls into the Trop. But it’s still understandably frustrating for an owner who believed winning would help Tampa Bay the same way it’s helped so many other teams, including the Rangers.

Except here’s the thing: The Rays will again spend less money than nearly any other team in baseball next year, and they’ll be damn good again anyway. Beltre’s third homer notwithstanding, Matt Moore offered another glimpse of his nearly limitless potential, and one of baseball’s best rotations could be even better next year. They’ll have so much pitching depth that one or more trades for bats are a near lock, allowing the Rays to address an often sluggish offense badly in need of upgrades. Young players will mature, the front office will find more Kyle Farnsworths, Joel Peraltas and Casey Kotchmans in the dollar store, and the Rays will scare the holy hell out of archrivals spending four or five times as much.

Sternberg might wish for more lucre. But the rest of us will still get to watch an incredible baseball team do incredible things against incredible odds.

Like many other veterans of the game, Tony La Russa rails against any methods that strike him as too new, too flavor-of-the-month. He bristles against the idea of Moneyball, doesn’t need Brad Pitt to tell how to run a baseball team, nor which Pixies song to listen to while blowing up buildings. He’s had not one but two best-selling books written about him and his own ways of running a baseball club. He might rankle people with his nearly limitless self-confidence and equally abundant contempt for other ideas. But the man’s won two World Series, garnered multiple playoff berths, and achieved more success than just about any manager this side of Connie Mack, John McGraw, and Casey Stengel. He’s earned plenty of admiration, if not quite reverence.

So how does a manager who dreams up more scenarios, more contingencies, and more counterstrategies than anyone (other than maybe Joe Maddon) get burned so badly by one move that it costs his team the game, and maybe the series and the season, too?

Jaime Garcia and Cole Hamels had battled through six scoreless innings apiece, keeping two of the National League’s best offenses at bay with an array of well-spotted pitches, plus some help from their defense. After a leadoff single and a passed ball pushed Shane Victorino to second in the top of the seventh, Garcia got two outs without a Victorino advance, sending Carlos Ruiz to the plate. More than your typical no. 8 hitter, Ruiz is a tough out, armed with a good batting eye and occasional pop. Intentionally walk Ruiz, La Russa figured, and Hamels would be an easy third out. Garcia intentionally walked Ruiz. Then Charlie Manuel immediately made the call: Have a seat, Cole. Your day is done.

We might be short-changing La Russa here. He had to know Manuel was pulling Hamels — he had already thrown 117 pitches when his lineup spot came up. Maybe that was precisely the point. The Phillies do have dynamic arms in the bullpen, led by Ryan Madson and dynamic lefty Antonio Bastardo.

Then there was the pitcher-on-batter matchup. By taking the bat out of Ruiz’s hands, Manuel’s best available pinch-hitter was Ben Francisco. The two right-handed hitters show similar career numbers against lefty pitching, Ruiz at .262/.363/.413, Francisco .261/.343/.425 — a few more walks for Ruiz, a little more power for Francisco, but overall two very comparable hitters. Except Francisco would be coming in cold, whereas Ruiz had been squatting and swinging for six innings to that point. Research done by baseball analyst Tom Tango shows that pinch-hitters are less effective than comparable batters who’ve been in the game to that point. So much so that we should slap a 10 percent discount on a pinch-hitter’s expected performance any time one comes to the plate.

There was one other factor to consider — the extra baserunner. By putting Ruiz on first, La Russa gave the Phillies a chance to score two runs on a ball hit to the gap, three if Francisco were to go yard. The Cardinals would have a little easier time getting the third out of the inning on a groundball, with the force in play at second or third base. Still, Ruiz’s reaching base helped the Phillies’ run expectancy. Maybe not enough to override the pinch-hitter discount Francisco faced, but enough to make a manager take pause.

So should La Russa have walked Ruiz in that situation? You can make a case for or against the move, really. By the strictest interpretation of the numbers, it was pretty close to a neutral decision. Neutral right up until Garcia hung a pitch and Francisco annihilated it over the wall in left-center for a three-run homer, an eventual game-winner.

There were other decisions and outcomes that played big roles in this game, especially one move in the eighth. After burning through Vance Worley, Bastardo, and Brad Lidge, Manuel called on Madson with the bases loaded and one out. The lanky right-hander, once deemed too untested and perhaps emotionally fragile to handle the supposedly impossible task of closing promptly induced a 4-3 double play, getting the Phillies out of the inning and effectively saving the game one inning before Jerome Holtzman’s definition of a save could be had. There again, Manuel prevailed, this time clearly in both process and result.

St. Louis can still take the series back to Philly if Edwin Jackson and company can get by Roy Oswalt and the Phils. But it’s also possible that the Cardinals’ season effectively ended when Francisco’s bomb sailed over the wall. Again, it may not have been a clearly optimal move, but it was a defensible one. Still, it would be interesting to read a third La Russa book, one that lays out the thought process behind that seventh inning.