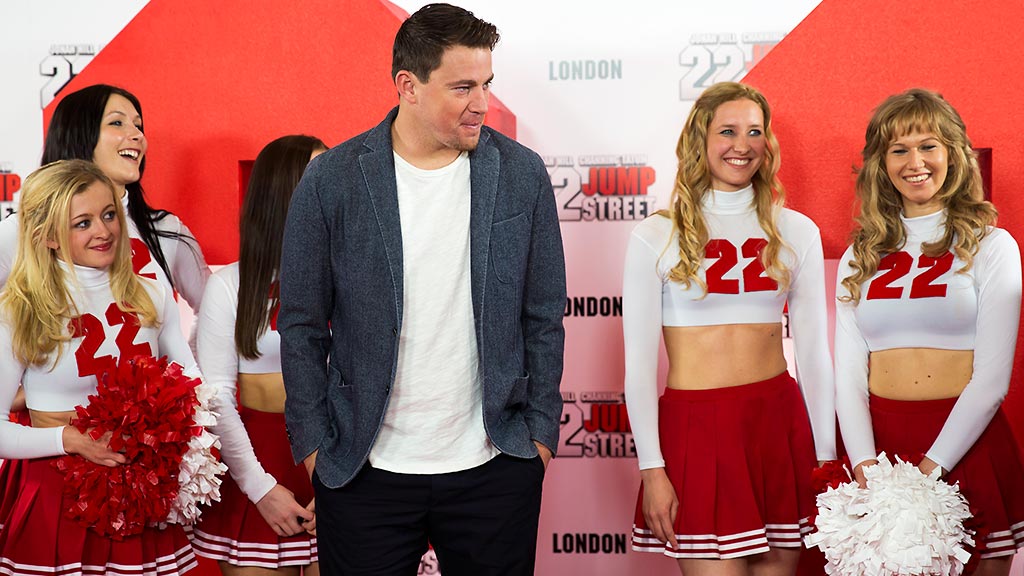 We haven’t actually read GQ’s Channing Tatum profile yet. You want to save a piece like this for a moment when it can really be savored, particularly if you are the type of person who saw both Step Up and Step Up 2: The Streets in theaters. If you are the sort of person who went around referring to C-Tatez’s performance in the 21 Jump Street cinematic reboot, repeatedly and with deep sincerity, as “A Revelation” to any audience who would listen and more than a few who would not, this is the kind of read you bookmark for a lazy afternoon in a sunny hammock while taking a break from stridently defending White House Down against those poor benighted souls who inexplicably found Olympus Has Fallen to be superior entertainment.

While we were waiting for the perfect moment to sever all contact with the outside world and marinate in these pages and pages of Tater tidbits, the Lord’s work–doing folks at AL.com went and plucked out the very most pertinent detail to our particular lives: America’s He-Heart, a Cullman native — think halfwayish between Birmingham and Huntsville, when you think of it at all — is a Crimson Tide fan.

So we know how Tatum feels about the Crimson Tide. But what is their measure of him? In the interest of equal time, we present the Alabama coaching staff’s scouting notes on its burly advocate’s cinematic oeuvre. Is he a box office gold gunslinger type, or more of a multiplex manager?

“NB: This is currently the last listed role in prospect’s IMDb profile, suggesting a lack of attention to detail and not enough appreciation for his rise to stardom: ‘Channing can be seen on the big screen as a featured actor in Coach Carter (2005), in which he plays a high school basketball player. He was also in the very popular TV series CSI: Miami (2002), where he played the role of Bob Davenport.’ That said, he does play ‘Bob Davenport,’ an Alabama football–worthy name if ever there was one. Auburn’s more of a divan program, and it shows.”

“Again, strong choice of character name in ‘Duke,’ which also displays elite-level mayonnaise-selection skills. Prospect is tarnished, however, for being associated with the wrong kind of football here. Soccer is not football, and Amanda Bynes is not a suitable companion for anybody.”

*In perfect seriousness for one second, She’s the Man is based on Twelfth Night (Duke? Get it? Get it??), and popular culture has never given this reach the adorably batshit credit it deserves.

“When we told him in camp he needed to focus on his footwork, that is NOT what we meant, and this had NOTHING to do with pocket presence. Real quarterbacks don’t gyrate, unless they’re doing it for positive yardage, like Brodie Croyle. ZERO STARS.”

[No legible sentences remain in any available printed records; audio files pieced together at a later date seem to suggest the coaching staff devolved, upon viewing this film, into a week-long argument fraught with bitter recriminations about the transformative power of dance.]

“Prospect shows real capacity for mentoring, spending this much time with great men who wear hats. Also, you can tell this doesn’t take place in Auburn because the robberies are successful.”

“Prospect is on shaky ground here. The only snake in authority we recognize in this state is named Kenny Stabler.”

“ARE YOU KIDDING ME? A LITERAL WAR EAGLE MACGUFFIN MOVIE?? YOU GOTTA KNOW YOUR ROLE IN THE GARRISON, SON. Great haircut, though. That’s the haircut of a Yellowhammer State Hall of Famer.”

“Outstanding hip flexibility. Impressive leg strength. Can get low. Creative in high-pressure performance situations. If this is eroticism, consider us swooning.”

“Concern in the room over influence of  Cobra Commander. Between the face mask and the pitch of that voice, will never be heard in a huddle.”

“Seriously, is he president? Of America? You’re not sure, either, are you? Not his character. His character helps President Jamie Foxx in the movie. But, Actual Channing Tatum. He’d do a good job. And I have to say, as badly as he wants to get out of the White House, and as many times as I’ve had to take days away from recruiting to be congratulated on another national title, I really sympathize with what’s-his-name here. Kale? Cale. Another fine quarterbacking name. Anyway, next title game we win, y’all think we could arrange to be there on a day everybody’s chasing a nuclear football in a briefcase around the D.C. metro area? Bobby, write that down. They can worry about that, and we can sneak off into the woods and call some juco kids. No, it’ll be great. Leave a trail of crumbled oatmeal creme pies behind us and we’ll be back in time for the closing credits. Beester, is that thing on?”