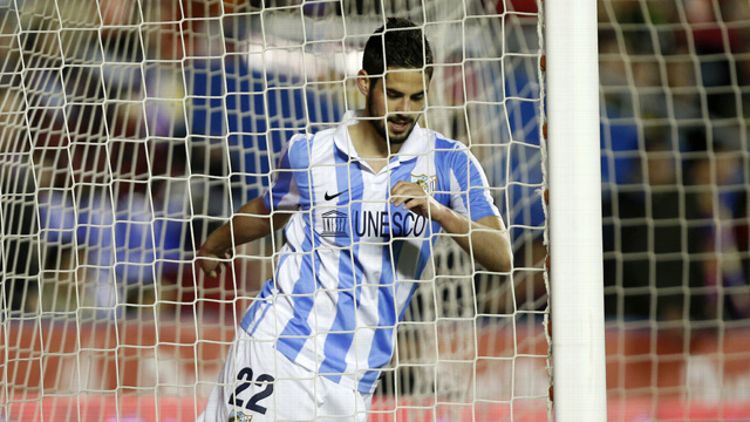 In European football, this is the era of the petro dollar. Manchester City was purchased by Sheikh Mansour, of the ruling family of the United Arab Emirates, and over the next two seasons acquired forwards Edin Dzeko, Sergio Aguero, Mario Balotelli, and prize jewel Carlos Tevez on the way to their first Premier League title in 44 years. Paris Saint-Germain’s relatively new Qatari owners parlayed their wealth into superstars like Zlatan Ibrahimovic, paying him enough that the French tax laws didn’t sting too much. Chelsea, old hand at the having tons of oil money thing, won the Champions League even after blowing 50 million pounds on the withered husk of Fernando Torres. And Malaga, in a matter of two years, went from being a La Liga relegation candidate to making its first-ever appearance in the Champions League, thanks to the beneficence of Qatari Sheikh Abdullah Al Thani and the talents of Santi Cazorla, Isco, and the venerable Ruud van Nistelrooy. But what happens when the tap of oil money is suddenly and inexplicably turned off? We’re seeing the results play out on the Spanish coast of the Mediterranean, and it’s, well, strange.

What is Malaga doing here?

Malaga dominated their Champions League group, going undefeated with a +7 goal differential against AC Milan, Zenit St. Petersburg, and RSC Anderlecht. If this were another year, that group might have proved more formidable, but Milan sold Ibrahimovic, along with world-class defender Thiago Silva as Silvio Berlusconi bunga-bunga’d the Rossoneri faithful. Zenit found themselves in the midst of a racially charged scandal, as they brought in expensive new additions Hulk and Axel Witsel, only to have their largest fan group turn on them because they’re non-white. And RSC Anderlecht, well, if this were the late ’70s, maybe they could’ve emerged from this group, but given that you’re reading this on the Internet, it’s probably not the late ’70s, so let’s move on.

Why is Malaga an underdog?

The 2011-2012 La Liga season was a dream for Malaga. New additions Isco, Cazorla, and Jeremy Toulalan were led by former Real Madrid manager (and current Chelsea managerial target) Manuel Pellegrini to an unprecedented fourth-place finish in La Liga. Early indications from last summer’s transfer market suggested they would make a play for Sevilla striker Alvaro Negredo to put themselves in a position where they could apply real pressure to the duopoly that sits atop Spanish football. And then, suddenly, things fell apart. Rumors of unpaid wages emerged, and a selling spree began. Although initially the sales were chalked up to a desire to conform to Financial Fair Play regulations, it soon became clear that primary owner Sheikh Abdullah Al Thani was, for one reason or another, pulling the plug on his football club.

Whether he was out of money, making a power play related to real estate deals that had fallen through in the Malaga area, or genuinely protesting the inequality of the Spanish FA’s allocation of TV money didn’t really matter; what mattered was that the team needed cash quickly. Santi Cazorla was sold to Arsenal for €15 million, as manager Arsene Wenger found a new market inefficiency to exploit (he would dip back into the “abandoned by a Sheikh” market in January, acquiring Malaga’s star fullback, Nacho Monreal). Striker Jose Salomon Rondon was sent off to Rubin Kazan in Russia, because when you can move from Malaga to Russia, you do it every time (or there were millions of euros involved; whatever). And even after a vote of confidence from the Sheikh following Malaga’s famous win over Milan (ignore the Italian side’s current form, please), the wage bill remained unpaid. In December, UEFA stepped in, issuing its equivalent of a death penalty: a one-year ban on European play for the next season in which Malaga qualifies.

What makes the whole incident tragic is the way in which Malaga has persevered through this financial uncertainty. Budding Spanish superstar Isco has established himself as a world-class playmaker. Manuel Pellegrini has rehabilitated his image after a tough stint at Real Madrid (where his biggest crime was finishing second to an all-time great Barcelona side). Historically, Malaga has been known for yo-yo-ing between divisions, but this season saw some winning play, in spite of the sell-off. Yet they have no hope of a return trip to the highest level next season unless debts are repaid quickly and UEFA decides to overturn its own ruling on appeal. Malaga’s domestic form has dipped a little since the January transfer window opened, with a stunning loss to relegation candidate Deportivo La Coruña, and dropped points in three of their last four home matches. Whether this is just the standard-issue inconsistency of a side hovering just below the top tier of a top league (see also: the play of the top three teams in London, or, CLUBS IN CRISIS), or a truly disconcerting stumble after another transfer window filled with uncertainty, is yet to be seen. Malaga is currently in fourth place in the La Liga table after a nice win over Bilbao (their first clean sheet of 2013), and heads to FC Porto with every reason to believe they could advance to the Champions League quarterfinals.

The other reason Malaga is an underdog on Tuesday.

They’re heading to Porto. Porto hasn’t lost in Porto all season. Porto has only lost one match anywhere this season, at PSG, 2-1, when already assured of their place in the knockout stages of the Champions League. All the history Malaga lacks, Porto has. One of the three titans of Portuguese soccer, alongside Sporting and Benfica, Porto has won two Champions League and two UEFA Cup titles in the past 25 years. They’ve won the Primeira Liga title six of the past seven years. They’ve had strikers such as Hulk, Falcao, and Lisandro lead their front line over the past eight seasons, and they currently have Falcao’s Colombian backup, Jackson Martinez, up front. They are very good, and while they lack the talent of the 2004 side that won the tournament with Jose Mourinho at the helm, they should expect to make a very deep run in this tournament.

How does Malaga play?

The always excellent Zonal Marking has a tactical breakdown of Malaga’s last truly dominant performance, a 4-0 league win against fellow Champions League side Valencia in November. 4-2-3-1? Check. Fluid quartet of attackers up front? Uh huh. Fullbacks get up to provide attacking support? You know it. Double pivot. You betcha, with Toulalan and Ignacio Camacho forming the first choice defensive midfield pairing in Pellegrini’s side, Toulalan being notable for his history with the French national team, and Camacho being notable for having both a fun and sporty side and a dangerous and brooding side.

Who’s the man to watch for Malaga?

21-year-old Spanish midfielder Isco is unstoppably brilliant on the ball, capable of firing on goal, and willing to distribute to teammates under pressure. Malaga, as a team, has been particularly accurate in front of goal in league play, and Isco’s poise has been at the heart of their success. A product of Valencia’s academy, Isco, who’s moved to a more central position since Cazorla’s departure, looks to be in the mold of his academy mates Juan Mata and David Silva, but also has a more physical presence than those two. Like a Fabregas/Mata hybrid? Here, watch these highlights of Malaga’s performance at home against Zenit. Isco’s two goals are stunners. He recently received his first cap with the Spanish national team, and figures to play a major role as La Roja prepares for life after Xaviesta.

So what’s a likely result on Tuesday? 2-1 Porto. Malaga’s uneven recent form, combined with Porto’s home dominance, suggests that the Portuguese champions will come out of this leg on top. Porto plays a traditional 4-3-3, and despite moving Hulk on to Zenit, has had no trouble finding goals at home. Malaga has played their best against top opposition, though, with a 3-2 win against Real Madrid (though that match was in the direct wake of San Iker’s first benching), and an incredibly competitive 4-6 aggregate defeat to Barcelona in the Copa del Rey coming in the past two months. I imagine Pellegrini’s men will get a road goal and take the hope of a Champions League quarterfinal home with them. A deep Champions League run wouldn’t be the strangest thing to happen to La Rosaleda in this strange season, but a hard-fought exit in the round-of-16 seems the most likely outcome.