The Mets’ Outfield Could Be the Worst Unit in Professional Sports, and Maybe All of Life 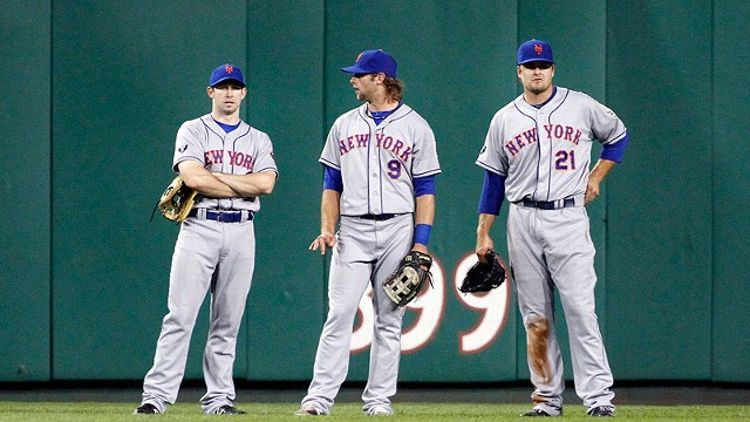 According to a list published by Forbes last summer, the New York Mets — crippled by a Ponzi scheme, castrated by incompetent ownership, and eviscerated by Little Brother Syndrome — are the 49th most valuable franchise in professional sports. This is remarkable and not at all surprising. The Mets are located in (the outer reaches) of the largest city in the country. They own their lavish new stadium. They charge $17 for a lobster roll at said ballpark. And despite their bungling reputation, the team has a rich history as a Major League expansion team made good. Two titles in 50 years — you could do worse. Ask a Padres fan. Forbes estimates the team’s value at $719 million, a number that would easily roll past the $800 million mark, among the Atlanta Falcons, the Chicago Cubs, and the McLaren racing group — elite company — if they could only pull themselves from the depths of financial ruin. Last year, the team lopped $52 million from its 2011 payroll. They’re down another $9 million this year to $84 million, which includes $19.3 million in dead money buried in the corpses of Jason Bay and Bobby Bonilla. And speaking of dead outfielders …

Forget Michael Bourn, Mets fans. Josh Hamilton, too; he’s at Disneyland. Not even Scott Hairston is walking through that door. Lucas Duda, Kirk Nieuwenhuis, and Mike Baxter: These are the men for our times. Knights. Legends. Warriors from an ancient guard sent to protect us.

Last season, according to FanGraphs, the Mets’ outfield ranked 29th of 30 teams in total outfield wins above replacement, with just 4.1. Hairston and Andres Torres, two players who combined for 3.7 of those 4.1 wins, are now playing elsewhere. Mets’ outfielders were ranked an aggregate 25th according to advanced defensive metrics. Only the Astros’ unit, collectively, was worse. As a point of comparison, the Astros have committed less than $15 million to their 2013 roster. They’re less a pro sports franchise and more a socioeconomic thought experiment at this point. The Mets, though, are still a team with fans and expectations and those $17 lobster rolls. And the prospect of running out three 26-year-old AAAA players, out of position and on the wrong team, is hilarious, cruel, and perfectly inexplicable. This winter, Mets GM Sandy Alderson was asked about the team’s plan for the outfield. Alderson, who is not aware that Last Comic Standing was canceled five years ago, responded: “Outfield? What outfield? We’re probably gonna have to bring the fences in another 150 feet!” Then he did it again in January: “A message to Mets fans: There’s been a lot of talk about our outfield, and I want you to know that I’m in serious discussions with several outfielders I met on the Internet. There’s one I really like. He says he played at Stanford.”

These jokes are funny and also evil. But they have value — they draw fans of the team away from nattering NL East concerns (no chance). And they raise important questions, like, Why do wealthy men buy toys — like a baseball team, for example — and make everyone watch as they break those toys? But unraveling the psyches of extraordinarily wealthy men is akin to asking a baby to read Infinite Jest — good luck getting the book open. It also demands cross-platform comparisons. Are there worse contemporary disaster units in sports? The Cleveland Indians’ starting rotation will likely get annihilated this season. Last year, the Tampa Bay Buccaneers’ secondary played like the Vatican City Air Force — they lived on a wing and prayer. And the Utah Jazz’s backcourt is presently testing the moral boundaries of “ineffective.” These are similarly middling teams with weak spots that will ultimately hamper forward progress. But these comparisons might be too mild, too encumbered by the metrics of sports. Look across the aisle, at culture. Who is as woeful as the Baxter-Nieuwenhuis-Duda triumvirate? Maybe the cast of Guys With Kids has a worse WAR. Maybe Macklemore & Ryan Lewis have no upside whatsoever. Maybe the studio forces behind A Good Day to Die Hard have an insufficient UZR. But those are the products of floundering entertainment models — a struggleface network, a broken recording industry, and an American action-movie crisis. Baseball is experiencing its biggest financial boom ever, getting fat on the blubber of exclusive-rights TV deals. But this is not that life for the Mets. Instead, they will test the limits of terrible. Because no one can stop a rich man from breaking his toy.