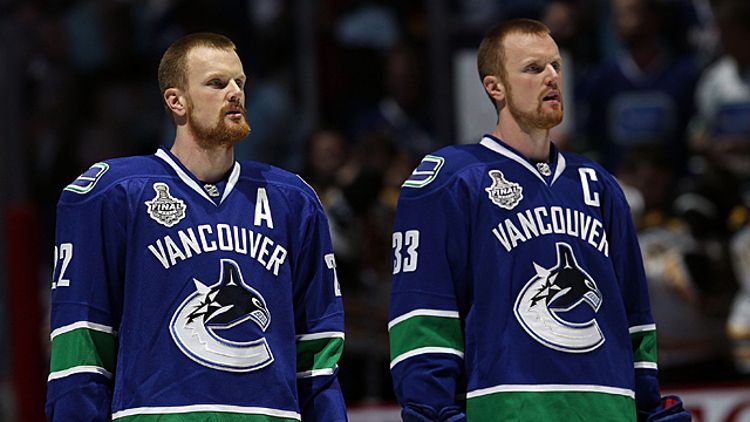 Sunday night was the premiere of the 22nd season of The Amazing Race, the round-the-world reality competition on CBS that turns pairs of contestants into far-flung Carmen Sandiegos as they vie for a seven-figure prize. And amid the usual crop of globe-searching souls this time around — the two hot blonde country singers; the nearly identical bespectacled doctors; the mulleted rednecks; the tear-jerking father-son pair — was the duo of Bates and Anthony Battaglia, hockey-playing American brothers.

Bates Battaglia was selected by the Mighty Ducks of Anaheim in the 1994 draft — that’s like being a living snapback hat, really — and scored 198 points in a career that included stints in Colorado, Washington, Toronto, and Carolina (where he had his career-best season in 2001-02). His brother Anthony was a college hockey player who has remained in various minor leagues ever since, losing his two front teeth somewhere along the way. With their giant arms, they’re intimidating — though compared with the group of Battaglia Brothers from whom they are descended, they’re practically teddy bears.

The brothers, longtime Amazing Race enthusiasts, submitted themselves for that most universal of reasons: watching the show, they figured they could do all of that. In the premiere they traveled to Bora Bora, skydived and built sand castles, flirted with the country singers, and (spoiler alert!) finished second overall, despite missing the earlier of two fights out of LAX. Already a good showing, and one that prompted the thought: Which of the other countless hockey relatives out there would make for good reality TV? Let’s take a look at these real-life hockey families, and the fake (FOR NOW!) reality shows where they could thrive.


The Sutter Brothers
You wouldn’t even need a premise for a show featuring the Sutters — you’d just need a camera, a warm jacket, and an ability to decipher farmboy mumbles. The six brothers (Brent, Brian, Darryl, Duane, Rich, and Ron) from Viking, Alberta, all played in the NHL in the ’70s and ’80s and have held various coaching and GM roles since. They’ve proven to be eminently watchable, in an understated and slow-moving way. It’s not unlike watching nature shows, actually.

In the amazing 90s-era documentary on the brothers, The Boys Who Loved Hockey, Darryl Sutter is at one point interviewed while leaning against a fence in front of a barn; years and years later, when he coached the L.A. Kings to the Stanley Cup last season, he did so as one of the more delightfully quotable characters associated with either team. (My favorite moment was his answer to a question about where he was when he got the phone call from the Kings, asking him to come take over the team: “I think I was in the barn … I wasn’t shoveling shit, I remember that, but I had that day.” A reporter followed up, asking him if he was literally in a barn. “Yeah. That’s what I said.”) I would watch a full Ken Burns miniseries on these people, for serious.

Andrei and Sergei Kostitsyn
From a new collaboration between Highlights and the Hallmark Channel, the Goofus and Gallant show would identify and rehabilitate bad dudes based on the examples of their better-behaved counterparts. Like Goofus, Andrei goes out partying late at night with enigmatic characters during the playoffs and ruins everything for his team, ultimately driving Ryan Suter out of town and sort of alienating Shea Weber. Like Gallant, Sergei Kostitsyn continues to play a dutiful and mostly unexceptional 16 minutes per game within Barry Trotz’s system. Each episode ends with a hidden-picture game on the screen.

The Lindros Family
Just as Ali and Dina Lohan tried to sustain a reality show that was devoid of Lindsey, Brett and Carl Lindros would star in Living Lindros with only occasional glimpses of a then-at-his-peak Eric. (Lindros family friends Goldie Hawn and Kurt Russell, on the other hand, would be series regulars.) The show would be centered around father-agent Carl’s escalating feud with Bobby Clarke but would ultimately be canceled — too soon for fans.

Danny and Kevin O’Shea
In Annexed to Puerto Rico, filmed in 1994, a pair of retired NHL brothers would be forced to flee the country to avoid being asked about Little Giants everywhere they go. See what happens when they trade skates for sandals and ice for “on the rocks.”

Jocelyne and Monique Lamoureux
No fake show required. I really just want these sisters to compete on Survivor or something.

Stephane and Stefan Matteau
In The Sins of the Father, contestants would race to undo the damages their father’s legacies have caused. The Devils’ Stefan Matteau must score a playoff series–winning goal against the Rangers so everyone will stop asking him about the one his dad scored against New Jersey. His opponent Deacon Phillippe (son of actor Ryan), meanwhile, must destroys every last copy of MacGruber. The winner gets one million dollars worth of therapy.

Colin and Gregory Campbell
Speaking of the sins of the fathers, if this wasn’t already a ripped-from-the-headlines episode of Law & Order, it feels like it should be.

Pavel and Valeri Bure
Full House of God is a look at what happens when a recovering meth-head (Jodie Sweetin) goes to live with her childhood TV show sister (Candace Cameron Bure) and her former NHL-playing husband (Valeri Bure), whose Hall-of-Famer brother (Pavel Bure) is living in the attic. Rounding out the cast is Jesus-freak Kirk Cameron — the funniest recurring character since Kimmy Gibbler.

Eric, Jordan, Marc, and Jared Staal
Hold onto your hats, because this one’s a topsy-turvy ride though the world of morality. Oh, it’s not that anyone would be lying to the female contestants on Thunder Bay — it’s just that no one would be doing anything to correct them from believing that Thunder Bay is some waterfront paradise with a favorable male-to-female ratio. Because, I mean, it technically is! It’s just that it’s also the location of the Staal Family sod farm. The looks on those girls’ faces as they step out of the vans in their bikinis in the middle of mud season … it would be priceless. You could write an entire sociology thesis on it, in fact. (“From Joe Millionaire to Sow Millionaire …”) But slowly and surely, some of the girls will be revealed as good sports, good souls, and good country women. They’ll realize that they can and do love a Canadian sod farmer. They’ll vow that they don’t need anything more … than the land. They’ll be like Goldie Hawn in Overboard but without the amnesia! (Except for this one contestant with a crazy backstory, Beth K.) And just when they’ve accepted the farming life, they’ll be blindsided again, as the NHL lockout ends and the Staal brothers reveal that they’re actually professional hockey players and now it’s time to move to a rented condo in Raleigh with ivory carpeting and nothing on the walls. And that’s where the story really begins … Thunder Bay.

Keith and Wayne Primeau
To go along with the modern trend toward the old-fashioned — the paleo diets, the lumberyard worker couture — this new daytime court room show Take it Outside would settle disputes the way humankind evolved to do: with fists. Hosted with tough love by brothers Keith and Wayne Primeau, who once squared off against one another on the ice.

Luke and Brayden Schenn
Brotherly Love will do for the city of Philadelphia what The Simple Life did for Altus, Arkansas.