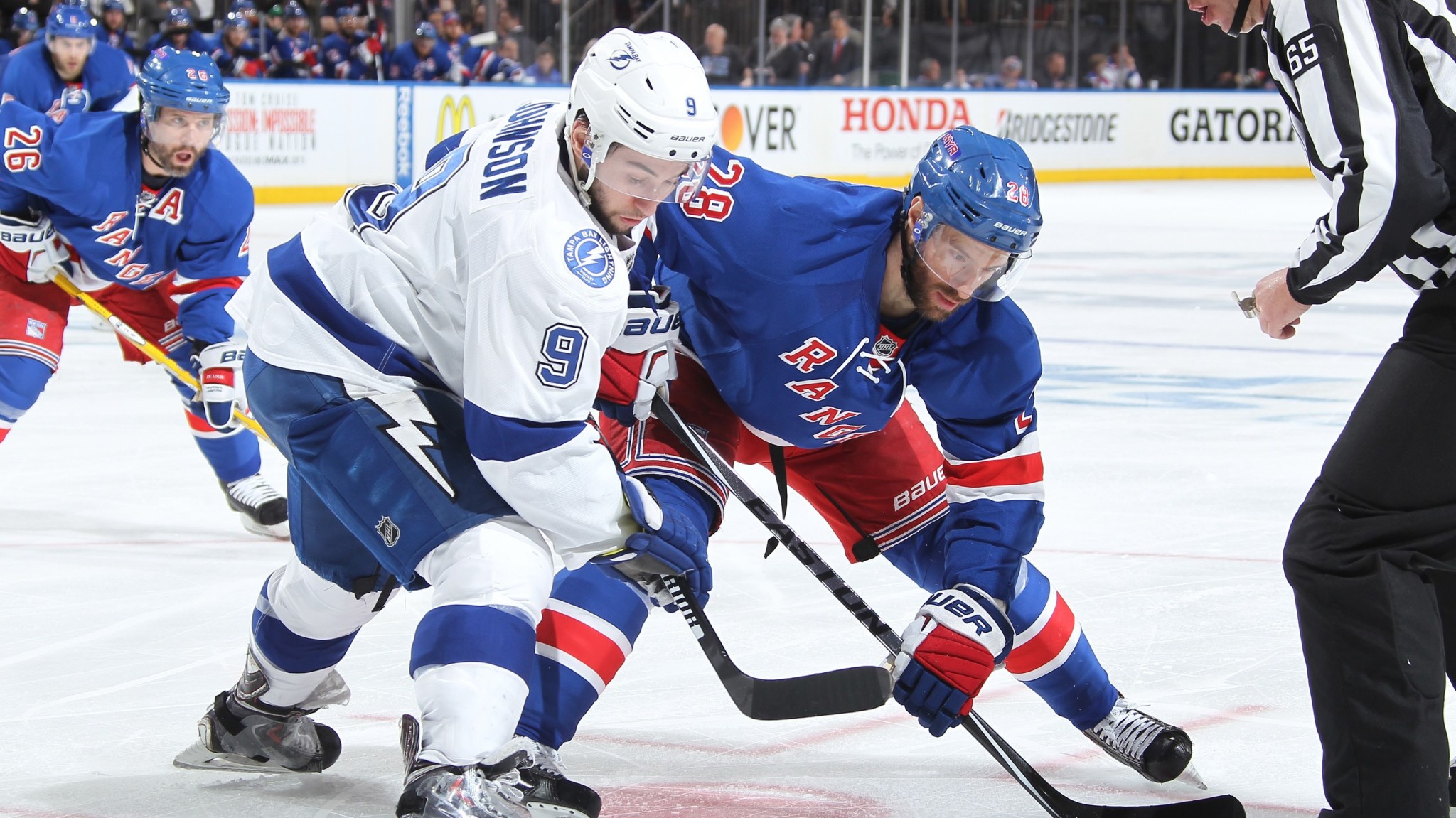 He recorded the first playoff hat trick in Tampa Bay Lightning history, taming beastly goaltender Henrik Lundqvist short-handed, on the power play, and at even strength. He tightened his grip on the playoff scoring race with his 11th goal, four more than star snipers Corey Perry and Patrick Kane. And yet Tyler Johnson’s most ridiculous play of the night, the one that left Rangers fans raising their eyebrows like ruh-roh, came when the 5-foot-9 whirling dervish didn’t even have a stick in his hands.

Late in the second period, Marc Staal was heading toward the puck and out of his defensive zone when Johnson, sans bâton, barreled into the 6-foot-4 defenseman, leaving him spinning. Johnson then “soccered it,” as Mike Emrick exclaimed, to Steven Stamkos for a quality scoring chance. (It was one of the few for the Lightning last night that didn’t wind up in the back of the net.)

In a wild and often crazed Game 2 of the Eastern Conference finals, the Lightning unglued and embarrassed the New York Rangers, 6-2, to tie the series at one game apiece. And it was Johnson who contributed a full half of those goals — one while his team was doubly short-handed, 5-on-3; one on a ballsy precision shot that straight-up bested the world’s best goaltender; and one that found order in a disheveled scrum of sticks and limbs in the Rangers’ crease.

After Game 1, which the Rangers won by their customary 2-1 score, Tampa Bay coach Jon Cooper said watching the game tape had made him “want to vomit.” He stressed it would be key for the Lightning to make Lundqvist look human: “The one thing you have to combat is the aura,” he said. On Monday night, it was the Madison Square Garden crowd left feeling nauseated as their goaltender was lit up for six goals on 26 shots, even if a number of them weren’t quite his fault. (As one observer put it, despite the chaos, the game only caused Lundqvist’s sterling save percentage at even strength to “plummet from .948 to .944.”)

“You walk into that kid’s house,” Cooper said last night about Johnson, “and you look at his trophy mantle — all you see is trophies. Winning follows that kid.”

Like player, like coach. Johnson played for Cooper when both were American Hockey League strivers; they won a Calder Cup in 2012 and found full-time employment in the big leagues at roughly the same time. Just as Cooper’s own ascent to the Eastern Conference finals came after successful stops at every rung of the ladder, from a Michigan high school parochial league to junior hockey to the minors, Johnson’s climb was both methodical and mystical, based on hard work, yes, but also benefiting from a healthy helping of luck. He could have wound up on a number of NHL teams, but he went with the Lightning, an organization that in hindsight was well-positioned to take advantage of young and semi-proven prospects like himself.

Johnson won a Memorial Cup in 2008 and a gold medal at the World Junior Championship in 2010, skating alongside and against players like P.K. Subban, Taylor Hall, Derek Stepan, and Chris Kreider. He endeared himself to the fans of his hometown junior hockey team near the Washington-Idaho border, the Spokane Chiefs of the rough-and-tumble Western Hockey League. But as a 20-year-old contemplating the future of his hockey career late in 2010, one thing stuck in his mind: He didn’t want to wind up as That Guy on some college campus.

“When I was 20 years old, right before I went back to juniors in Spokane, I almost didn’t know if I even wanted to go back,” Johnson told Tampa Bay Lightning reporter Bryan Burns in January, shortly before he took part in his first NHL All-Star Game. “I didn’t want to be a 20-year-old freshman in college somewhere. I thought maybe I should just start my life and start my career somewhere.”

Johnson had always hoped his career would involve hockey, but after being cut from his USHL team and later passed over in the NHL draft for three years running, mostly because of fears about his small and unchangeable frame, he couldn’t help but start mentally venturing down other roads. Med school, perhaps. Doctors don’t have to be tall.

Instead, he trudged back to junior for one more year, earned a slew of awards, and caught the eye of some NHL scouts who were sifting through refuse, panning for gold. One of them was Al Murray, a Hockey Canada scout who came to the Lightning in the fall of 2010 and was part of the franchise’s decision to take a flier on Johnson the following spring.

Four years later, Johnson is part of a team built largely from within, with a few key free-agent signings — notably steady defenseman Anton Stralman, who was picked up from the Rangers — bolstering a homegrown roster. Last season, both Johnson and his linemate Ondrej Palat were finalists for the Calder Trophy, given to the league’s top rookie. (Nathan MacKinnon, the NHL’s first overall pick before that season began, ultimately won the award.)

In the AHL, Johnson and Palat had been part of a unit called the “Top Gun Line.” This year, the two of them and Nikita Kucherov have been such a solid trio that Cooper mused in November, “It’s weird, because they all seem to be on the same wavelength. It’s like they’re triplets. It seems those three guys are almost thinking for each other, and it’s pretty sweet to watch.” The name stuck: They’ve been known as the Triplets ever since.

Just as Johnson’s been both lucky and good over the last several seasons, the Lightning were both in Game 2. While the Rangers botched a number of odd-man rushes, the Lightning capitalized on theirs. While Ben Bishop was frequently sprawled far outside his net, he managed to keep most pucks far outside too. It’s unlikely there will be another game this series — hell, even this postseason — with as many penalties and bank shots and net-crashing goals as this one had; it’s safe to say Lundqvist won’t let six go by again anytime soon. (The last time he did so was in his first playoff game nearly a decade ago.)

But on a team that features Stamkos, one of the few bona fide superstars in a mostly egalitarian league, it is instead Johnson who has earned front-runner status for the Conn Smythe Trophy, given to the most valuable player in the postseason. Of course, this presupposes that Tampa Bay wins the Cup, or gets tantalizingly close; they’re not there yet. But Johnson has built his career off of getting there. Med school is just going to have to wait.