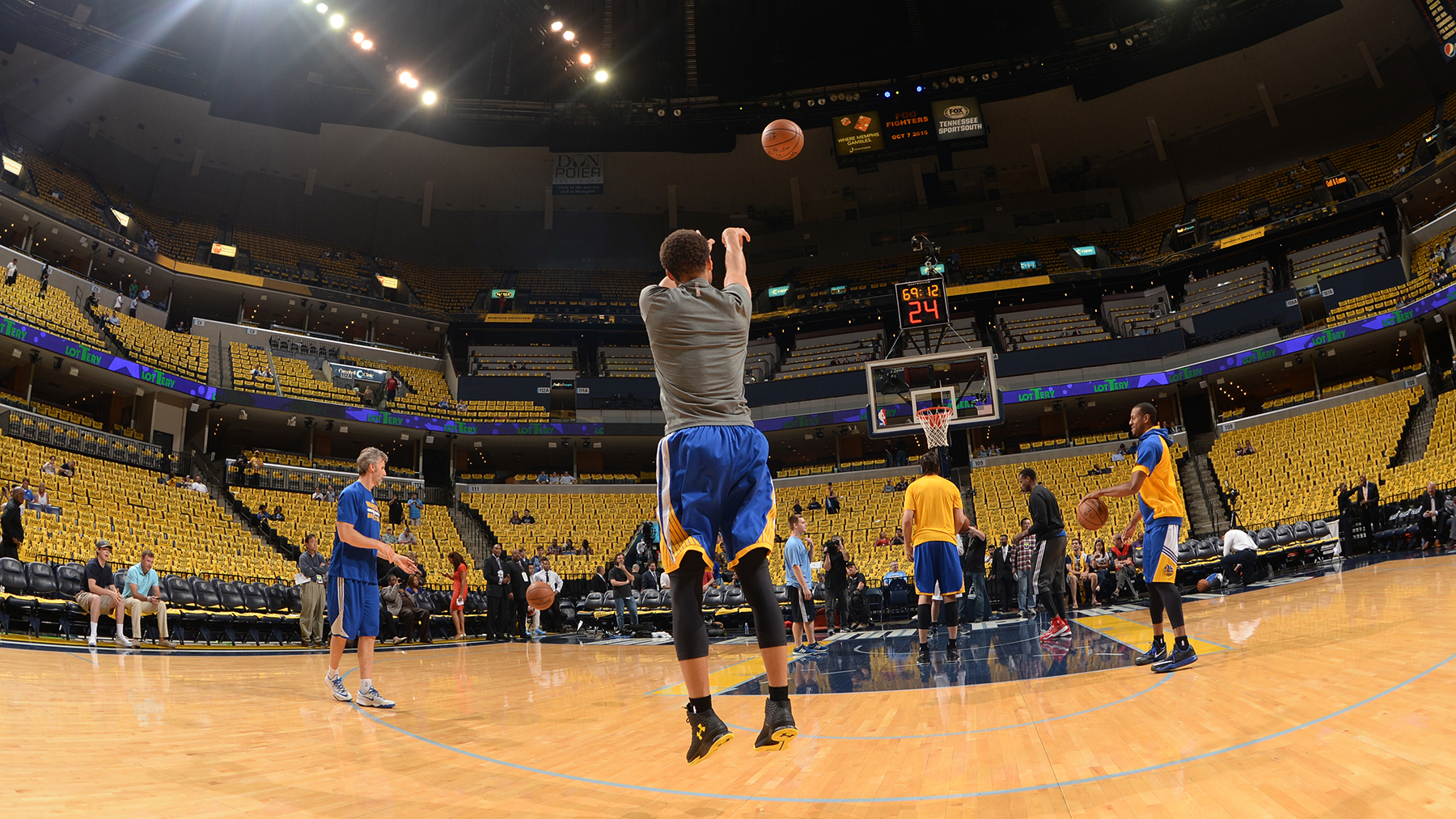 It can get exhausting to be a basketball fan with an Internet connection. Now more than ever, following the NBA online means getting caught in the crossfire of narratives and counternarratives on a daily basis. You are overwhelmed by straw men and the beating of dead horses. Like an alternate, much dorkier version of Westeros, there’s a tension between the Old (basketball) Gods and the New that underpins almost every discussion we have about this sport. While Charles Barkley wonders whether jump-shooting teams can stay hot in the pressure of the playoffs, Phil Jackson can’t resist gloating when they don’t:

Then, when the shooters bounce back and it turns out that all four conference finalists lead the playoffs in 3-point attempts, we get the ultimate comeback. That’s how it’s goink, Phil.

There’s nothing wrong with this back-and-forth, but it shortchanges the better story. That story is Steph Curry and the Warriors.

Great teams all over the league have been putting more faith in the 3 over the past few years — Zach Lowe did a great job highlighting this shift as it happened — but none of them is as evangelical as Golden State. The Warriors will pull up and shoot from anywhere. They kill you from the outside in. Their 3s set up their layups. Nobody’s ever won a title like this.

Over the past few months, dozens of experts have debated the Warriors’ style and pointed to the Spurs and Heat as two teams that disprove the conventional wisdom that “jump-shooting teams can’t win a title.” But that’s a little misleading. Think about what made those teams work. The Spurs could penetrate-and-kick with Tony Parker. He’s always been the linchpin for everything they do. That’s why Parker’s ankle cartilage is the best barometer for San Antonio’s title chances each spring. The Spurs also had low-post options with Tim Duncan and Boris Diaw to help set up shooters. For a variety of reasons, the 3s the Spurs took during their Finals runs were usually open.

The Heat could always work through LeBron and Dwyane Wade to get easy buckets in the half court, and then they created open looks for shooters stationed around them. Like San Antonio, going inside out meant the majority of the 3s those teams took were open looks. That was the case in the 2012 Finals, when LeBron bullied the Thunder down low while picking apart the defense to find wide-open shooters all over the court. If you’re looking at what made the Spurs and Heat great, 3s are more like icing than cake.

Meanwhile, nobody really mentions the teams that lived on jump shots and lost. Go back to that Spurs team — it made the Finals last year in part because the Thunder collapsed down the stretch. Russell Westbrook and Kevin Durant couldn’t get easy shots in overtime of Game 6 of the Western Conference finals — they missed seven jumpers combined in OT — while Tim Duncan was burying them with layups. This is how the Thunder have been undone every time they’ve lost in the playoffs, dating back to their Finals defeat at the hands of low-post LeBron. The opposing defense gets tighter in the final minutes of close games, Durant and Westbrook settle for tough shots, and they haven’t been able to get anything easier.

The same thing happened to the Mavericks in 2007. That’s probably the most famous example of jump shooting gone wrong. They were the best team in the league that year, but then the playoffs started and they faced Golden State. Stephen Jackson was able to beat the crap out of Dirk Nowitzki (2-for-13 in the decisive Game 6, 38 percent in the series), and the Mavs couldn’t get easy buckets or score enough to keep up with Baron Davis and Jackson as they went nuts from everywhere.

When a similar Mavericks team bounced back a few years later, it did so in part because Dirk had developed a post game that was just as lethal as his perimeter skills. Those Mavs still thrived on the perimeter, but Dirk had turned himself into an option for easy buckets in the half court. That, coupled with the defense of Shawn Marion and Tyson Chandler, is what put them over the top.

Look at the Chris Paul teams from the past few years: The same way you can trace a line between OKC’s failures and a shooting swoon, the dots are connected pretty clearly with the Clippers. In wins against the Rockets, they were 39-for-91 (42.8 percent) from 3. In losses, they were 29-of-118 (24.5 percent). J.J. Redick, maybe the most valuable Clipper outside of Blake and CP3, went 14-for-26 in the first four games and 6-of-26 in the final three losses. When the jumpers stop falling, they don’t have many other ways to beat people, especially if Blake doesn’t show up. Suddenly, that team becomes pretty mortal.

The 2015 Hawks are living the same story, but with Kyle Korver instead of J.J. Redick. The only reason the Wizards series was close at all — besides our lord and savior Paul Pierce, and his son Otto Porter — was because Korver has crashed back to earth since the regular season. He’s dragged the Hawks offense with him. Korver isn’t hitting from the outside the way he did for most of the season — 29 percent on 3s overall against Washington, and somehow worse when he was wide open — and just like that, the Atlanta team that made scoring look shockingly easy has made it look much harder in the playoffs. They may have beaten my Wizards, a team playing offense with two left feet (and one broken hand), but the Hawks juggernaut from the regular season has been gone for weeks.

So consider the evidence and look at the big picture. Remember the arguments from Charles Barkley and Phil Jackson, which state that defense gets tougher in the playoffs and teams that dominate with perimeter shooting will eventually struggle. Whether you’re looking back at recent playoff history with the Mavs or Thunder or what’s happened in the past few weeks with the Clippers and Hawks, there’s more proof that Chuck and Phil have a point than any evidence that debunks their theory. 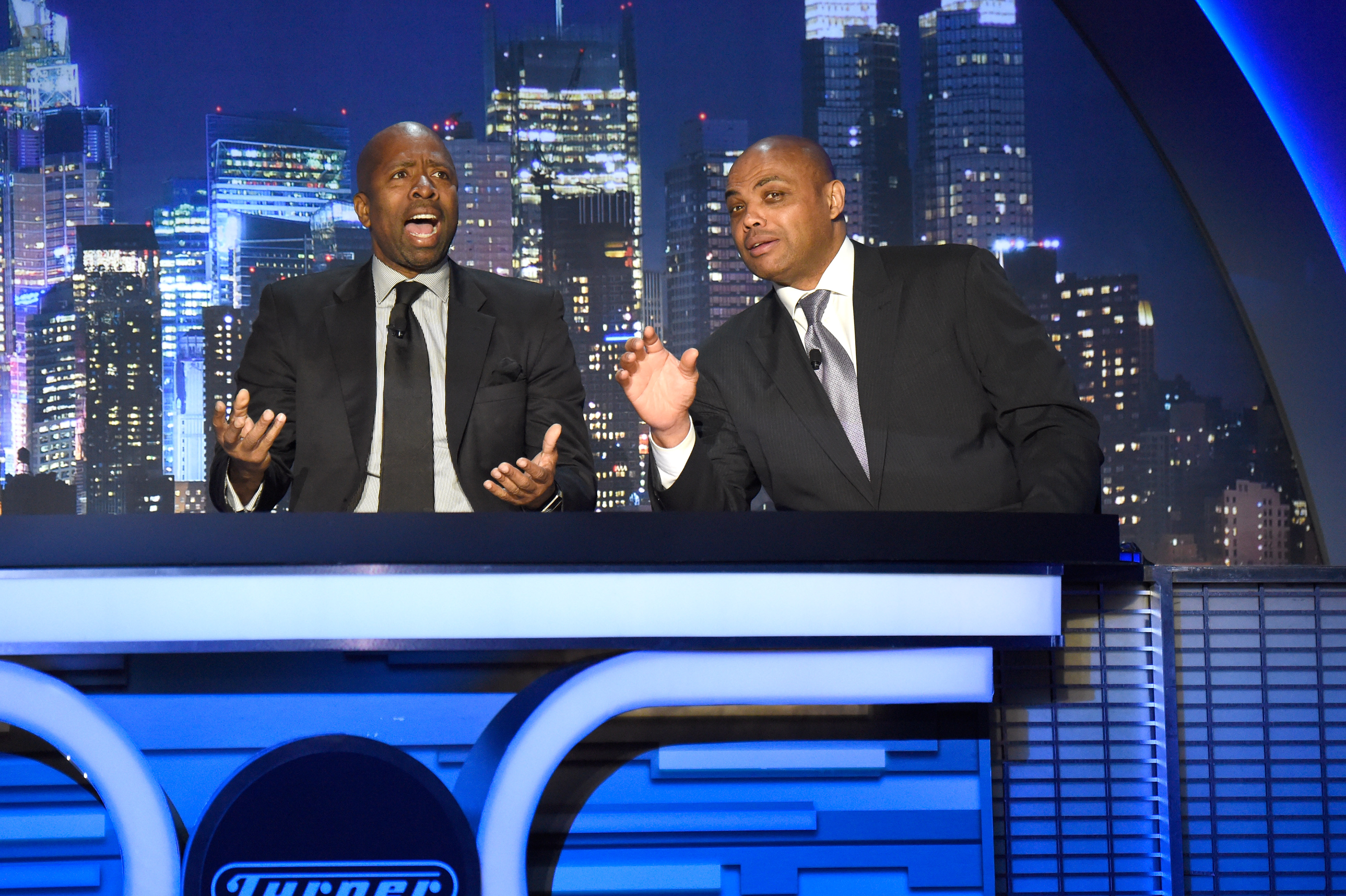 This is what makes the Warriors amazing. We’re watching an extreme version of those cautionary tales from the past, and it’s working.

Sure, smart teams all over the league prefer 3s to long 2s. That much is obvious, and is explained by basic math. But there’s a difference between kicking to open role players for 3 and going four-out to rely on perimeter superstars full-time. Even the 2009 Magic had Dwight. Even the 2015 Rockets have Dwight. Golden State is in a different category.

If the 3 was icing on the Heat’s and Spurs’ cakes, the Warriors are closer to a cake made entirely of icing. And it’s working.

Don’t talk to me about the points they scored in the paint this year. Most of that came in transition. Be honest about what we’re watching. In the half court, this team takes some of the most reckless contested jumpers you’ll see anywhere, and they make them like it’s nothing. Earlier this year, I wrote, “The Warriors make me throw up my hands and say ‘Jesus Christ’ more than any team in NBA history.”

Sixty-three percent of their points came on jumpers. They terrorize people with transition 3s, sprinting down the court and stepping into 24-foot shots. And the craziest thing about the Warriors is that they make playing this way look perfectly sane.

You should go see Mad Max: Fury Road this week, because the guy hanging off the hood of the car with the flaming guitar is probably the most accurate representation of how the best team in the NBA plays basketball.1 There are immaculate spacing and ball movement underpinning everything, chemistry that’s been there all year, and a killer defense that’s as crucial as anything. But at the core, this team is still powered by Steph and Klay’s nuclear capacity for fuck-you, right-in-your-face pull-up jumpers that deflate any defense paying attention. When those shots fall, it’s over.

There’s been a collective impulse to respond to Warriors skepticism and explain all the ways Golden State is more than a jump-shooting team, and that’s fine. Any team that wins 67 games is great in a lot of different ways. But that shouldn’t distract from the bigger picture: This is a jump-shooting team, and they are more successful than any we’ve ever seen. They’ve been so good that conventional wisdom doesn’t apply. 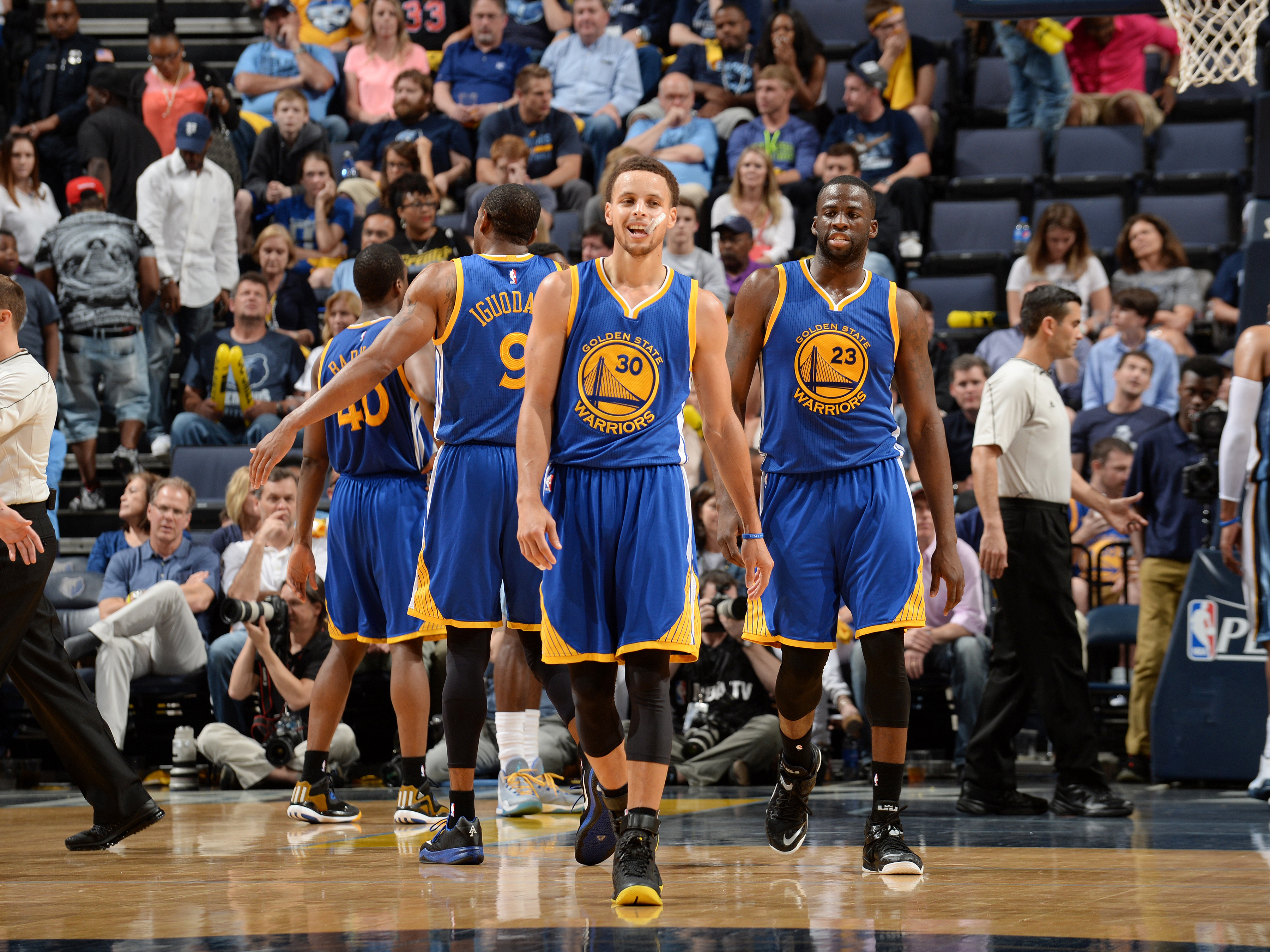 The shock appeal gets lost when fans and writers lash out at skeptics and sneer that their doubts are lazy narratives couched in old clichés. It’s how most basketball arguments go on the Internet. Experts point to stats to settle arguments, ex-players point to experience, and nobody really listens to one other. Everyone is too defensive to admit the other side has a point. (This is also how every argument goes on the Internet.)

Barkley, last seen getting wooed with $1,700 worth of wine and tequila (!!!) by Turner executives who don’t care that he openly ignores most of the league, makes himself an easy target for backlash. But he’s basically right, isn’t he? Look at the Clippers and Hawks the past two weeks. Go back and watch the end of that Thunder-Spurs series.

The tension between old and new wisdom is what makes basketball fascinating in 2015, especially if you admit there’s truth on both sides. Pretending that the skepticism was always bullshit only shortchanges what makes Golden State incredible. It’s no different from when everyone pretended it was ridiculous to question LeBron in big games (as if the 2011 Finals never happened), or that anyone who ever doubted Dirk was a fool (as if the 2007 Warriors series didn’t inspire a month-long vision quest in Australia that eventually led to a different player, and, um, the 2011 Finals). Acknowledging the doubts along the way only made it more satisfying when they finally broke through to win.

That’s what this Warriors season has been for me. I keep waiting for the bottom to fall out, and it hasn’t happened yet. Every available metric says they’ll win the title. They are basically unbeatable at Oracle, which should help the cause. They’ve played the easiest possible playoff draw, thanks to a dominant regular season, injuries to the Thunder, and playoff exits from the Spurs and Clippers. And a little part of my brain still wonders. Before every Warriors game, I come in thinking, They can’t do this again, can they? Then by the third quarter, I’m dumbfounded. That’s what makes this team so much fun.

I’m glad nobody has ever won a title this way. It’s possible to admit that Barkley and Phil have a point and then stand back in awe while Steph Curry makes it look completely irrelevant.