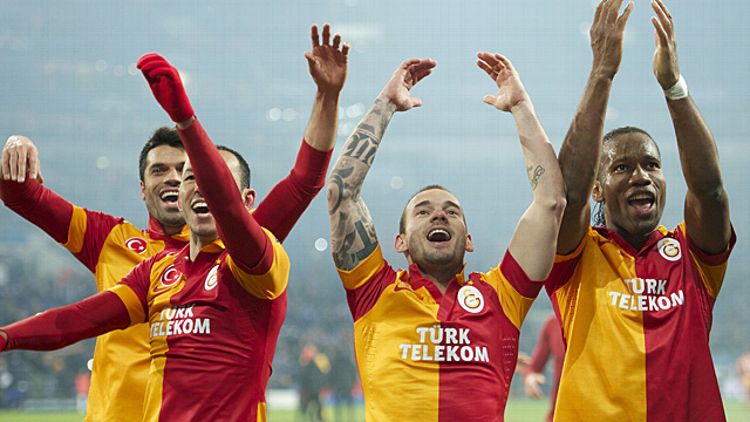 It’s good to be the Emperor. Since reassuming control of the club where he played the bulk of his career, Fatih Terim, who is known in Turkey as the İmparator, has led Galatasaray to a level of success they haven’t seen in more than a decade. With players who match Terim’s attacking instincts, Gala, only two years removed from a disappointing eighth-place finish in the Turkish Süper Lig, is back in the Champions League quarterfinals for the first time since 2001. Its roster features big names like Dutch midfielder Wesley Sneijder and ex-Chelsea Champions League hero Didier Drogba. Terim’s reputation, damaged by Turkey’s failure to qualify for the World Cup in 2010, has been restored, so much so that he has been linked with the opening at Inter Milan. But the quarterfinal round of the Champions League is rarefied territory, and even an Emperor can find himself an underdog when he runs into the “Special One.”

What is Galatasaray doing here?

After dominating the Turkish Süper Lig last year, Galatasaray was drawn into a group with Manchester United, CFR Cluj, and Braga. One of those things not being like the others, Gala should have advanced without too much of a sweat. They didn’t do that though, and had to gut out narrow wins over United and Braga in the last two match days to push past CFR on a tiebreaker. Galatasaray got a bit lucky in the round of 16, getting an off-form Schalke side who then lost striker Klaas-Jan Huntelaar for the second leg of their tie. Gala had to sweat that match out, holding off a late onslaught from the Germans before sealing the tie with a late counter-attacking goal.

Why is Galatasaray an underdog?

Going away to Real Madrid is a problem for the Turkish club on a number of levels, some obvious, some less obvious. Let’s start with the glaringly obvious: Madrid is good at home. Really good. For all of the talk of Madrid’s form being up and down this season, is still hasn’t lost at the Bernabeu since 2011. If Gala wants to avoid being run over, it’s going to have to focus on damage control, and hope that Madrid’s strikers’ recent tendency to be profligate in front of goal flares up again.

This leads to the less obvious issue. With recent acquisitions Sneijder and Drogba, the most talented lineup that Gala runs out right now involves Drogba and Burak Yilmaz playing up top, with Sneijder tucked in behind them at the head of a diamond-shaped midfield. Given Madrid’s skill on the counter, strength in the center midfield, and speed out wide, it’s hard to imagine Gala will be able to play that formation without leaving itself vulnerable. There isn’t a lot of flexibility with those players; Yilmaz and Drogba aren’t playing anywhere other than up top, and Sneijder is less effective shunted out wide. Add to that the mild groin injury Sneijder picked up on international duty (which will make the already attack-minded Dutchman even less likely to provide defensive coverage), and it’s hard to see how Terim can play his preferred lineup and still keep Madrid in check.

Gala was able to counter Schalke’s width in the last round with this formation by having its holding midfielders provide help on the flanks, while leaving Brazilian international Felipe Melo in a deeper central position to provide defensive coverage down the middle. The issue here is that Schalke’s width, while quick and effective, is not Madrid’s width. It’s one thing to stay strong against Jefferson Farfan; to do so against Cristiano Ronaldo is a much bigger ask.

However, Gala can’t counter Madrid’s skill by just taking an attacking option off the pitch, as doing so could allow Jose Mourinho to get away with a lineup featuring Mesut Ozil, Luka Modric, and Xabi Alonso in the midfield. This formation would be less steely than his preferred lineup with Sami Khedira or Michael Essien playing alongside Alonso behind Ozil, but the Ozil-Modric-Alonso midfield is an unstoppable creative engine. It was Modric and Ozil (with Khedira at fullback) who led Madrid back against a 10-man United side.

How does Galatasaray play?

Let’s set aside for a second the issues Gala will face when it doesn’t have the ball. With the ball it is an incredibly dangerous team. It gains width from its fullbacks, who get forward in attack, and can supply to Drogba and Yilmaz. The two forwards have played well with each other; Drogba’s beefy brand of hold-up play pairs nicely with Yilmaz’s intelligent runs. Terim has said this side is equipped to play the type of football he likes, but that style risks conceding goals on the counter.

Who is the man to watch for Galatasaray?

Despite the arrivals of Drogba and Sneijder, Galatasaray’s main attacking option remains Yilmaz. Quick, who is the joint leader in goals scored in the Champions League this year with Ronaldo and Lionel Messi? I bet you wouldn’t have guessed Yilmaz unless you had already read down to this point in this article. But you have. And he is, with eight goals. The Turkish striker also leads the Süper Lig with 18 goals in 23 games. A traditional no. 9, able to strike with both feet, Yilmaz is the total striker. Naturally, Chelsea has already had a £21 million bid rejected for him.

There are a few factors working against Madrid in this match. Its top striking option, Karim Benzema, is in the worst form of his career. Pepe hasn’t gotten a red card in a while, which means he’s due. There’s a brewing goalkeeping controversy as Diego Lopez has been excellent deputizing for the injured Iker Casillas, who is now returning to training. And, the last time these two teams met in a Champions League quarterfinal, Galatasaray came back from two goals down to win 3-2. But that match, unlike this one, took place in Istanbul. And in the return leg Madrid won 3-0 to eliminate Gala. It seems Madrid winning, 3-1, is a reasonable outcome this time around. The Emperor doesn’t park the bus, and it will cost him.