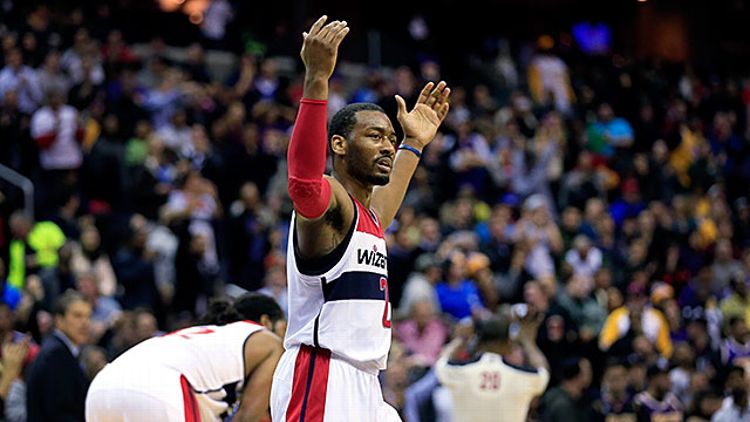 Over the course of the last three games, John Wall has scored 99 points. I just watched all of them with the new NBA.com video playlist function. I basically invented John Wall RedZone. You can thank me later.

[Editor’s Note: You may notice that I am not your regularly scheduled Wizards correspondent. That’s because Andrew Sharp single-handedly caused Bradley Beal’s fibula injury with this paragraph: “But Beal is the best young shooting guard in the league, he has gotten better every week, and it’s the first time since Gilbert Arenas that the Wizards have a star other teams would actually kill for. He’s the greatest.” Be careful out there, keyboard cowboys. You can hurt someone.]

Now lets talk about this man on fire.

Friday, November 22: 37 points against the Raptors

Impressions: Here’s an impression: If Wall makes the turn on a pick-and-roll, and nobody has switched, or his man is stuck smelling Nene’s armpits, then it’s a wrap, and the only one beating Wall is Wall himself.

Best play: With 6:19 left in the first quarter, Wall got his shot blocked by Jonas Valanciunas, stole the loose ball off of DeMar DeRozan, dribbled in a lighting-fast semicircle around the aforementioned Raptors, plus Rudy Gay (for good measure), jumped through the air like a cannonball, fake-passed to Nene, and made a layup.

Honorable mention goes to the coast-to-coast layup sequence that caused Kyle Lowry to lose his shoe.

Honorable honorable mention should go to the time he double cross-overed Terrence Ross and had the Raptors announcers shouting, “Oh my!”

Guys he dusted: Mostly “Shoeless” Kyle Lowry. There were some terrible things done to Steve Novak, too.

Saturday, November 23: 31 points against the Knicks

Impressions: That’s Wall’s shot chart right there. Yes, it is a video of Maverick vs. Jester from Top Gun, but the point is that speed is as important to Wall as space is. We usually think of field goals coming from different spots on the floor — the corner, the block, the rim, the elbow — but for Wall they actually come three-quarters of the way down the court. That’s where a lot of his field goals take shape, when he does his little hop-step and begins his gallop down the court. Wall’s gallop is faster than most NBA players’ sprint, and if you get caught backpedaling … shoot, only God forgives.

From that point, Wall can attack the rim, pull up for a midrange jumper (is there anything better than a midrange John Wall jumper … wait, where are you going?), or fire some elaborate pass off to a corner 3 shooter of which the Wiz have … well, they have Martell Webster and Trevor Ariza (and Beal, when Sharp isn’t putting him in traction). Against the Knicks, Wall used this one-man, one-vs.-three or -four secondary break a lot. That’s because he was being guarded by Beno Udrih, who was having some serious problems staying with his man.

Best play: A top-of-the-key 3 in Melo’s eye, with just 4:24 left in the game, while A$AP Ferg’s “Work” played. This put the Wiz up nine, and they never looked back. It’s entirely possible I dreamed this.

Guys he dusted: The aforementioned Udrih. That was his most frequent victim. He also got after Pablo Prigioni, made Carmelo look like a turnstile, and had a particularly ill drive on J.R. Smith, where Smitty was just like, “Nope.” You see Wall do what he did to J.R. over and over. As he’s bringing the ball up the court, if he sees space behind the man who is guarding him, and if said man is too deep, he will run straight at him and dare that defender to do something about it. I’ve seen some (Lowry, mostly) try to take a charge, but the only refs who would call that garbage are taking selfies outside of Cameron Indoor Stadium. It’s pretty awesome to watch.

Tuesday, November 26: 31 points against the Lakers

Impressions: Here is a cool sequence of Wall events last night from the Wizards’ 116-111 home victory over the Lakers:

• With about two minutes left in the third, Wall did his 0-to-60 routine on Shawne Williams and Nick Young, beating both Lakers “defenders” down the court and to the rim.

• Wall missed the shot, but was fouled. At the free throw line, HE PUNCHED HIMSELF IN THE FACE BECAUSE HE IS A CHAMPION. He made both free throws.

• About half a minute later, he beat three Lakers down the court, getting to the rim and making an acrobatic pass to Webster in the corner for a 3. This is unremarkable save for the fact that Wall made that pass while breaking the sound barrier.

• While I was contemplating the relationship between time and space, he Usain Bolted again, this time past Steve Blake and Swaggy P, to score a layup in a blur of red, white, and blue.

Right now, there is no better advertisement for NBA League Pass than Wall. He ended the game with 31 points on 10-of-18 shooting, adding nine assists and six boards. According to ESPN Stats & Info, the Wizards are plus-20.7 points per 100 possessions when Wall is playing.

Guys he dusted: He kind of revoked Blake’s DMV pass. He had one play in particular that I liked, where he split Blake and Pau Gasol in half. His biggest victim, if not the most frequent one, was Young. He was out there doing David Blaine–icepick-through-the-hand tricks on him.