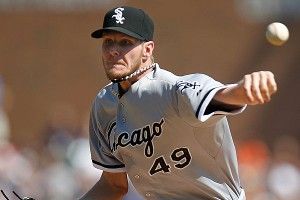 The American League Cy Young race has turned into an excellent five-man duel, and four of the names are very familiar — 2011 and 2010 winners Justin Verlander and Felix Hernandez, Angels ace Jered Weaver, and MLB wins leader David Price. But the fifth, Chicago’s Chris Sale, is a virtually unknown 23-year-old southpaw, playing in just his second full season with the White Sox. At 6-foot-6, 180, he’s not much more than a string bean, but his long arms and his swooping, jerky delivery — complete with a devastating slider — evoke Randy Johnson to an almost eerie degree. His fastball topped out at 96-98 as a reliever last season, but as a starter he lacks Johnson’s velocity, settling in the high 80s and low 90s. As we’ll see, though, the rest of his numbers have only improved in his first year as a starter, and a deeper look indicates that Sale has a legitimate shot at this year’s Cy Young and many more to come.

Sale hails from Lakeland, Florida, played three years at Florida Gulf Coast University (11-0, 2.01 ERA his junior year), and pitched just 10 games in the White Sox minor league system before being called up in August 2010. He amassed a 2.79 ERA last year as a reliever, but Robin Ventura and the White Sox always saw him as a starter, and this year he got his chance. Aside from a brief hiccup with elbow soreness that saw him make one appearance in relief in May, it’s been a fantastic campaign for the man whose teammates call him “Flat Stanley,” after the children’s book character.

A feature written earlier this month published in the Naples News gives the best background you’ll find on Sale, who was only 5-foot-8 as a freshman in high school. He grew and improved, but he was never considered a Division I talent, much less a major leaguer. His main claim to fame in high school was giving up a 440-foot home run to Andrew McCutchen, the current Pirates star. He struggled in his first season at FGCU, almost quit, and then started to flourish before unleashing a spectacular junior year. He lives in Naples during the offseason with his wife and 2-year-old son, and his dad, Allen, has a recreational pilot’s license. (I thought you’d want to know.)

If you want to summarize Sale as a pitcher, you can do it in one word: movement. If you hate stats, feel free to skip the rest of this section and just take it from me that the action on all four of Sale’s pitches is among the best in the majors.

I got into Sale’s strengths a little bit in last Friday’s weekend preview, but let’s revisit some of the main points. The thing everyone wants to talk about first is that Johnson-esque slider, and for good reason. It’s Sale’s finishing pitch, and he’s third on the list of strikeouts-by-slider in Major League Baseball (numbers courtesy of John Fisher and ESPN Stats & Info):

Sale’s slider is a filthy little thing. In fact, it has the most movement of any lefty slider in the game, including Sabathia. Bear with me for a second while I get stat-sy and talk about PITCHf/x horizontal movement, which is measured on FanGraphs as the difference in inches between where a pitch would go if it was thrown with no spin, and where it ends up based on the spin imparted. A ball that breaks into a right-handed batter, as with any slider thrown by a left-handed pitcher, has a negative value. As you see on the charts for qualified starters (bottom of the page), Sale has more horizontal movement on his slider than all the other prominent lefties like Clayton Kershaw, C.J. Wilson, and Sabathia. (For reasons that aren’t clear to me at the moment, the best righties seem to have way more movement on their slider). When discussing vertical movement, a negative value implies a downward movement, and there Sale is third among qualified starters. Basically, the stats tell us what we expected from the video: His slider comes across and down to extreme degrees. It’s no wonder he gets so many strikeouts with the pitch.

But the fixation on the slider ignores a crucial element of Sale’s repertoire — an extremely lively fastball. We talked about the diminished velocity, but the real secret to his success is, again, the movement. Sale throws his straight fastball just 11.8 percent of the time, but, unlike the slider, it actually tails away from right-handed batters and in on the hands of lefties. It has the most right-to-left horizontal movement of any fastball in the game.

His two-seamer, which he throws 45.3 percent of the time, is the sixth-most lively right-to-left horizontal pitch of its kind among qualified starters. And as you’d expect, he has the third-lowest vertical value on his straight fastball, and the ninth-lowest on the two-seamer, meaning that both pitches “sink” relative to what you’d expect from a normal fastball. His fourth pitch, the changeup, has a similar profile — second-most horizontal movement, lots of sinking action.

Now, movement isn’t everything. Just ask Matt Moore, the ballyhooed Rays rookie whose pitches are at or near the top in most movement categories, just like Sale, but who has struggled to a 4.23 ERA. Execution matters — a lot — and unlike Moore, Sale makes it count. But the movement stats give you an idea of the tools Sale is working with, and why he’s had such an amazing year despite average velocity.

If you wanted to make an argument for Sale’s candidacy, it would go like this: His ERA, 2.37, is second-lowest in the AL behind Weaver. He also has the second-lowest home run rate, the lowest FIP, and the second-highest WAR behind Verlander. He has plenty of wins, if you’re into that, and his strikeout rate, while slightly below the Hernandez/Verlander/Price trio, is high enough at 8.20 to be in the conversation. His WHIP (walks plus hits per innings pitched) is third best in the league, though he trails Verlander and Weaver.

If I had to give the award today, it would be an incredibly hard decision that would probably fall in favor of Verlander. But Sale is in a dead heat with the three renowned aces, and that’s a remarkable feat in his first season as a starter.

The knock on Sale, and on any pitcher with an irregular motion (especially if that motion is sidearm), is that his arm might not hold up to the rigors of a starter’s workload. ESPN’s Keith Law and others have speculated that Sale is a serious injury waiting to happen, and there appears to be some precedent. His fastball and two-seam velocity have fluctuated, though the general trend is downward and both were lower in a poor outing against Detroit on Saturday. It’s too small a sample to reach a definitive conclusion, and we’ll know more when he takes on Yu Darvish in a fantastic pitcher’s duel on Friday.

If he stays healthy, and right now there’s no reason to expect otherwise, he’s put himself in position to join players like Dwight Gooden and Bret Saberhagen as one of the youngest Cy Young Award winners in major league history.