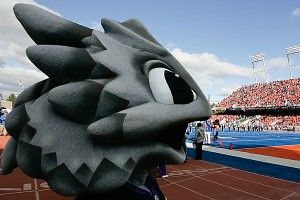 “You see those six suites over there?” the man in the purple shirt says, pointing across the construction zone. “Those are $15 million apiece.”

Fifteen million. How many have you sold? I ask.

The man in purple smiles proudly. “All of them.”

Hi from TCU. Or “Texas Construction University,” to use the too-cute name circulating through the athletic department. By the time the Horned Frogs become a full-fledged Big 12 team this fall, their stadium will have been rebuilt. More important, their entire je ne sais quoi will have been rebooted. Today in our advanced college football studies, we look at the means by which a BCS-busting small school morphs into a $15 million-per-suite school. “One of the mottoes we have is not to do anything gaudy,” says Mark Cohen, TCU’s director of media relations. Well, of course not. We’re talking about college football here.

The idea that TCU could be … really cool is a new thing. I grew up in Fort Worth. Back then, TCU was a collection of cream-brick buildings and Greek houses that, in football terms, gave off the whiff of an ancient media guide. The Frogs once boasted Sammy Baugh, Davey O’Brien, Billy Clyde Puckett, Bob Lilly, and Coach Dutch Meyer, who quipped, “Fight ‘em till hell freezes over … then fight ‘em on the ice.” But those were an old man’s memories. Fort Worth’s Gen Y had to watch Leon Clay throw the ball to the other team.

By the late 1980s, Amon G. Carter Stadium was a great place to ignore a football game. I went to see TCU’s 1990 home opener against Washington State solely so that I could buy a Cougars hat. (TCU lost 21-3.) The biggest Frog game of that era came on November 7, 1992, when TCU beat the Texas Longhorns. It was the Frogs’ first win over Texas — a conference opponent, mind you — in 25 years. I was there. The place was nuts. That season the Frog won one more game, lost eight, and tied Western Michigan.

When the Southwest Conference fell apart, TCU became an NCAA vagabond. Mark Cohen and I walk through the football office and find Davey O’Brien’s 1938 Heisman next to hardware from the WAC, the Mountain West, and Conference USA. (At one point, TCU agreed to join the Big East but never played a game there.) Then, beginning in the late 1990s, three things sparked a turnaround. First, TCU hired Dennis Franchione. Second, Dennis Franchione left. Third, TCU promoted his defensive coordinator, Gary Patterson. Patterson, whose defensive genius and fashion sense are both borrowed from Bill Belichick, got the Frogs to a place such that ESPN’s College GameDay came to Fort Worth in 2009. It is a sign of the times in modern college football that the school calls that night against 14th-ranked Utah the “biggest game in program history.” In 2011, TCU won the Rose Bowl.

It was a richly ironic moment when the Big 12, which looked like it was about to go the way of the Southwest Conference, started courting the Frogs. So here’s the new TCU, a small school engaged in an arms race with the big boys. TCU has only 8,200 undergrads — a few more than Duke. According to Cohen, there are fewer than 80,000 living TCU alums. (The current student enrollment at Texas, by way of comparison, is 51,000.) But on December 1, TCU will have a home game against Oklahoma. This is where the mass construction comes in.

After putting on hardhats, Cohen and I walk into the new press box. The old Amon Carter press box had a wasp infestation — different from greater Fort Worth’s WASP infestation — and the bathroom door often got stuck. Now, there’s enough room for 125 print reporters.

We enter the $15 million suites. Unlike the skyboxes of the super-rich, they’re built right into the middle of lower deck — just 11 rows from the field. Behind the suites is a cavernous room with a brick fireplace called the Founders’ Club. “This is where all the movers and shakers of Fort Worth will be congregating on Saturdays,” Cohen says.

We walk inside the new players’ loun— “We don’t like to use the L-word,” Cohen says. “We call it the player community room.” In any case, it’s now BCS quality: cozy chairs and flat-screens that are showing the 2011 Rose Bowl on an endless loop.

TCU’s locker room is officially big-boy. You can tell by the leather benches — the, uh, benchmark of any true power school. But unlike other Top 25 teams, whose locker rooms always remind me of smoking lounges at the Playboy Mansion, TCU’s has high ceilings and a lot of light. I could go on. There are new Nike anthracite uniforms — “We’re like Oregon Junior,” says Cohen — and a 19,000-square-foot weight room where Andy Dalton could be seen working out this summer. Another milestone: TCU’s facilities are now better than the Bengals’.

TCU isn’t the only school that’s upgrading for a new conference. SEC-bound Texas A&M is thinking about yet another stadium renovation. But here’s what interesting about the construction boom. In 2012, a school like TCU can’t pay its players. So what TCU has to do is take the money and surround the players with it. TCU builds bigger suites for alums. A bigger press box for reporters like me. It provides the players with flat-screen TVs and leather benches in their lockers. When you can’t pay your football players, you build them a man cave.

A Horned Frog of 2012 makes about the same amount of money as Davey O’Brien did in 1938. But he goes to work in an environment that is infinitely richer. TCU was already a power on the football field, and now it’s a power off it, too. It is a Horned Frog in a gold collar.

Filed Under: The U