Can Anyone Explain Why the A’s Are Good? 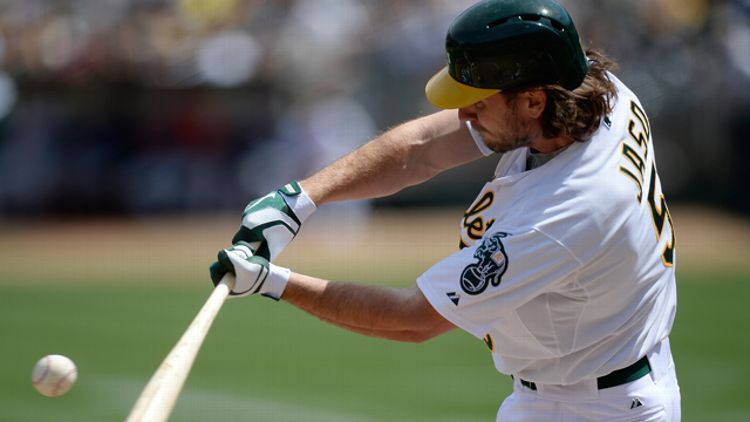 The 2011 Oakland A’s offense was, in a word, inept. As a team, the Athletics hit .244/.311/.369. They finished 20th in runs scored and 24th in home runs. Just one player on the entire roster hit higher than .265 that season: Jemile Weeks, the team’s primary second baseman, who managed just two homers all year. On the final day of the 2011 season, with the A’s out of contention, the Mariners let Oakland hitters stand on the outfield grass for all their at-bats; not a single player reached the warning track.

OK, that last part’s not true. But the rest is. Even adjusting for the offense-suppressing, home-run-squashing confines of O.co Coliseum, the A’s still stunk, posting the 23rd-ranked offense in the majors, one that was 11 percent worse than league average.

Which is what makes what’s happened since a minor miracle. The 2012 A’s hit 195 home runs, the seventh-highest total in the majors last year and a 71 percent jump from the year before. Five players hit 15 or more homers last season, up from just one in 2011. All told, the A’s offense surged to 10th-best in the game on a park- and league-adjusted basis. This year, Oakland’s attack has taken another step forward: Twenty-one games in, the A’s are scoring 5.7 runs per game, the best mark in baseball.

How did this happen? How did a team of punchless wonders suddenly become one of the beastliest teams around? Let’s dive in.

Is it the weather?

One of the things we’ve learned over the past few years with the rise of analytics is to consider the environment in which players play when evaluating their performance. We’ve had some vague sense of this for a while, watching pop flies sail over the Monster at Fenway, then seeing baseball played at a mile-high altitude. But if we’re going to pay attention to outfield wall distances, the amount of foul territory in a ballpark, and the kind of air through which a ball travels, we should probably look out for prolonged, abnormal weather patterns, too.

Last season, the Mariners’ offense was unbelievably bad in the first half of the season. This wasn’t a surprise. The team lacked frontline offensive talent, and supposed up-and-comers like Justin Smoak, Jesus Montero, and Dustin Ackley were terrible. Throw in the always pitcher-friendly dimensions of Safeco Field, and you could understand the lousy numbers. Thing is, Seattle’s pitchers put up extraordinarily good numbers for the first three months or so, too. Again, Safeco under normal conditions would help some. But given how thin the team’s pitching talent was behind Felix Hernandez, this seemed like more than your usual park factor influence. Dave Cameron wrote a piece for FanGraphs in June that highlighted the nearly historically cold weather Seattle had last spring. We haven’t yet developed precise metrics to figure out exactly how much weather affects offense. But a truly aberrant weather streak like we had last spring in the Emerald City should at least make us take climate into account.

So has East Bay weather contributed to the A’s offensive barrage over the past year-plus, and especially the team’s power surge? Greg Rybarczyk, proprietor of the excellent Home Run Tracker site, tracks everything from how far homers fly to how secondary factors such as weather affect home run production. What’d you find, Greg? “No significant difference there,” he said.

Is it the hitting coach?

That’s a theory that’s gained some traction lately, which makes sense when you think about timing. Before the 2012 season, the A’s hired Chili Davis to be their new hitting coach. Buster Olney wrote about the move last week, quoting red-hot A’s shortstop Jed Lowrie’s appreciation of Davis’s approach, including his ability to appreciate hard-hit balls and not sweat it when line drives land in gloves.

It’s true that the A’s offensive revival coincided with Davis’s arrival. And you have to love any coach or manager who values process over results. But no study has ever pinpointed the effect that a hitting coach has on an offense. There are plenty of good reasons for this, the most obvious one being how tough it would be to strip out the many other variables involved (hitter quality being the most important) to isolate exactly how much a hitting coach helps or hurts a particular offense. It’s entirely possible that Davis has made a tangible difference in Oakland. We just have no way of proving it — beyond a few shiny quotes from his pupils — one way or another.

Is it the way the A’s use their players?

Now we’re getting closer. One thing the A’s did aggressively last year was platoon. Seth Smith split time at DH with Jonny Gomes, combining for 32 homers; Gomes was especially effective, hitting .262/.377/.491 with 18 bombs in 333 plate appearances. Catcher wasn’t a strict platoon per se. But after the A’s shipped Kurt Suzuki to the Nats, Derek Norris and George Kottaras had something of a time-share … and combined for 13 homers in 325 plate appearances during their time in Oakland.

No platoon served the A’s, or any other team, better than the duo of Brandon Moss and Chris Carter. Manager Bob Melvin put both players in situations where they’d be most likely to succeed. Of the left-swinging Moss’s 296 plate appearances last year, 234 came against right-handed pitchers. The righty-swinging Carter got 260 plate appearances, 151 of them vs. righties. Here’s what Oakland got from those 556 PAs: 30 doubles, 65 walks … and a ludicrous 37 home runs. Carter hit .239/.350/.514 for the season, while Moss mashed at a .291/.358/.596 rate.

Platooning is hardly a new concept. Earl Weaver platooned heavily. Hell, so did Casey Stengel. Find two players with perfectly complementary skills and you can still get one supremely productive position, half a century after the Perfessor’s final days as a manager. The combination of Moss and Carter outproducing Albert Pujols for $11 million less wasn’t the only reason the unheralded A’s pulled off a shocking AL West title while the highly touted Angels missed the playoffs last year. But it was certainly one of the biggest.

Did the A’s simply find the right players?

Pretty much, yes. But it’s not as if they simply threw gigantic piles of money at the four fanciest available free agents and rode them to home-run heaven. First, they jettisoned four of the top five home-run hitters from the 2011 club, with Josh Willingham, Hideki Matsui, and David DeJesus leaving at year’s end, and Suzuki getting dealt to D.C. in mid-2012. Gomes signed on as a similar replacement for Matsui, or a poor man’s Willingham, a cheap, thirtysomething slugger who could make up for his complete lack of defensive value with a bunch of long balls.

But a quartet of younger pickups typified Oakland’s approach to player acquisition. The A’s traded two fringy pitchers to land Smith from the Rockies, bringing over a 29-year-old left-handed hitter who’d shown solid on-base skills and decent pop in Colorado. Moss signed as a free agent after getting just six plate appearances with the Phillies in 2011. He hadn’t shown much power in the big leagues, but did hit 134 homers with a .191 Isolated Power mark in the minors; he was 28 years old when the A’s scooped him up. Josh Reddick was a decently regarded product of the Red Sox system who was Baseball America’s no. 75 prospect before the 2010 season. Given his first taste of semiregular big league playing time in 2011, Reddick bagged 18 doubles, three triples, and seven homers in 278 PA but also showed an iffy batting eye, striking out far more often than he walked. Still, when the A’s had an opportunity to convert a relief pitcher (albeit a good one) into a soon-to-be-25-year-old corner outfielder with power and a big throwing arm, they jumped at the chance. The one pickup who came in an actual big-ticket deal was Yoenis Cespedes, the 26-year-old Cuban defector who inked a four-year, $36 million contract to come play stateside. Even counting Cespedes’s $6.5 million salary last season, the four players made about $10 million combined — and smashed 90 home runs, despite Smith and Moss being limited to platoon duty and Cespedes missing 33 games because of injury.

Not every team that tries a roster rebuild like this is going to strike gold the way the A’s did. But by identifying players with power potential who all fit the mid-to-late-20s age range at which most hitters peak, the approach was spot on and the results followed. Even more encouraging was what Billy Beane and company did after their 2012 joyride. Seizing a chance to find a rare commodity — a 29-year-old catcher who could really hit — Oakland pounced on a three-way deal to land John Jaso, who’d hit a very impressive .276/.394/.456 amid the offensive zombies in Seattle last year. They added another 29-year-old in Chris Young, the slick-fielding, power-hitting center fielder who’d fallen out of favor in Arizona and cost just Cliff Pennington and a prospect (plus the $8.5 million it took to pay him, to be fair) to acquire. Both Jaso and Young are off to slow starts this year. But Jed Lowrie’s raked from Day 1. The 28-year-old infielder had shown plenty of pop and on-base skills throughout his minor and major league career, only to get sidetracked by injuries. Lowrie didn’t come cheap, costing the A’s Carter, promising right-hander Brad Peacock, and A-ball prospect Max Stassi. But the results so far have been spectacular: .351/.432/.571, with Lowrie serving the unlikely dual role of shortstop and cleanup hitter, sandwiched between Reddick, Moss, Young, and Smith while Cespedes recovers from another stint on the DL.

In a sense, what the A’s have pulled off is an updated version of Moneyball, seeking out players with certain skill sets at a certain age who could be had cheap and provide big bang for the buck. Close your eyes and you could see Brad Pitt pointing to Jonah Hill as they snagged the new versions of David Justice, Jeremy Giambi, and Scott Hatteberg, only younger, more talented, without the likes of Jason Giambi and Johnny Damon leaving at the same time, and with Jonah Hill now working for the Mets.

Caveats abound: The A’s have played six of their 21 games against the hapless Astros, rolling up nearly as many runs in those six games against that awful pitching staff as the Marlins have all year. If we’re focusing only on 2013 results, the sample size is still too small to tell us all that much.

But we’ve got more data than just those 21 games to work with. The remaking of the A’s has been more than a year in the making, and the heart of the team’s lineup consists entirely of the late-20s brigade that management has built through cheap signings and shrewd trades. If the bullpen remains airtight and the combination of Bartolo Colon and a bunch of kids holds up its end for the rotation, Oakland can contend again in the AL West this year, maybe even repeat as division champs. Only this time, it won’t be nearly as big of a surprise.