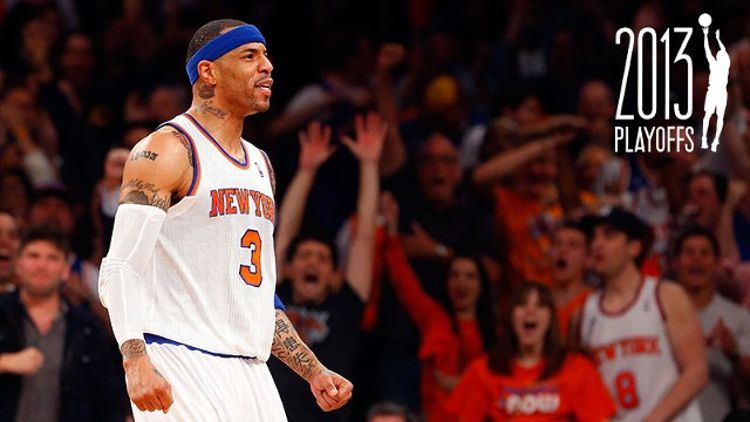 Boston Celtics head coach Doc Rivers sure knows how to make a room full of reporters shift in their seats.

“I guess they say ‘The series hasn’t started’ …” he began, ” … and I’ve heard this corny line a million times, ‘until the road team wins.'”

We laughed, but it was a nervous laugh. We were busted. He was on to all of us and our lazy pet cliches.

“Well, I am positive the series has started,” Rivers continued, “because we are down, 2-0.”

The Knicks had just beaten Rivers’s Celtics, 87-71, Tuesday night in a contest that was so similar to Saturday’s Game 1 that it had moments of downright déjà vu. Like how the Knicks set a franchise playoff record by holding the Celtics to just 23 points in the second half. The previous record? 25 points, in Game 1. Or how Carmelo Anthony went 11-for-24 and put up 34 relatively streaky points, much like his Game 1 performance of 13-for-29 from the field for 36. Melo called the game, which he’d characterized beforehand as a “must-win,” a “tale of two halves.” As they had on Saturday, the Knicks went into the second half trailing and came out of it winning.

“We did what we were supposed to do at home,” said Knicks coach Mike Woodson, “and now we have to travel to a hostile environment.” The two games were so alike that Woodson even echoed a line he had said after Game 1, a line that the Boston Globe’s Dan Shaughnessy seized on in an over-the-top column about Anthony earlier this week. Then, Woodson said: “When we got into a tough stretch, [Anthony] made the plays we needed him to make. That’s what the great ones do.” On Tuesday night, referring to Melo’s ability to make in-game adjustments, Woodson said: “He figures it out. That’s what the great ones do.”

The Knicks’ win gave them their first 2-0 lead in a playoff series since 1999-2000, when Jeff Van Gundy was coach and Marcus Camby wasn’t the elderly man with his warm-up pants hiked up to his rib cage he is today. It also meant that the Knicks have picked up as many playoff wins in the span of four days as they had in the previous 11 years. But in contrast to the last couple of postseasons, in which everyone — players, fans — kinda seemed just happy to be there, this time around you get the sense that anything other than, oh, eight or nine playoff wins will be considered a disappointment.

It’s amazing how quickly things have changed. Last time I was at a Knicks game, Carmelo Anthony had joined the team just a few months before; now he’s the lone active player still around from that roster. (Amar’e Stoudemire, who’s out following knee surgery, was on the bench in a suit during last night’s game and is threatening to return to the lineup for the second round.) A fan in line for a beer last night sported a Gallinari jersey, and the thought of the MSG P.A. announcer cartoonishly “Mamma-mia”-ing his name seemed like it was something I was remembering from a faraway fever dream. Linsanity wasn’t even a gleam in the national media’s eye yet. The Rasheed Wallace micro-era was inconceivable. Madison Square Garden had purple and teal seats and an asbestos scare, not Hill Country barbecue and gleaming concourses. (And this was all only two years ago!)

“Every time they bring in another guy, the guy gets older and older,” Doc Rivers said, referring specifically to Kenyon Martin, whom the Knicks signed in late February and who has taken on an important role in this series as Tyson Chandler has struggled with a neck injury. “And better and better.”

Martin, who was drafted first overall shortly after the Knicks’ last playoff series win in 2000, is now 35. (Rivers’s statement wasn’t necessarily true, as Camby, Jason Kidd, and Pablo Prigioni are all older than that.) After the game, Martin sat next to 16-point scorer Ray Felton at the press conference podium, wearing a grandfatherly sherbet-colored sweater that advanced his years, and talked about hearing the MSG crowd chanting his name in the fourth quarter. (It’s unclear whether Knicks owner Jim Dolan joined in or whether he was too busy with his lollipop.) Martin was a force during the game, grabbing rebounds, blocking shots, and looking, as I jotted down in my notes with about three minutes to play in the game, “like a caged beast.” Seth Rosenthal described it in even more colorful terms, saying Martin spent the fourth quarter “manically spanking layups and bellowing at no one in particular.”

It was hard to say the same thing about the Celtics’ players in Martin’s approximate age cohort. Paul Pierce scored 18 points and added six rebounds and assists apiece, but he also turned the ball over five times. Kevin Garnett, beset by foul calls that Rivers called “horrendous,” scored just 12, though he did add 11 rebounds. With those two players combining for 30 points and with no Rajon Rondo, it’s hard for the Celtics to know where else to look for scoring.

“We don’t have 50 points in our bench,” Rivers said reasonably, “and we know that going in.”

As for the Knicks’ bench, J.R. Smith showed why he’d won the Sixth Man of the Year Award on Monday, scoring 19 points that included a 36-foot buzzer-beater at the end of the first period seven seconds after he’d nailed a fall-down fadeaway jumper. (He celebrated with his go-to air guitar.) When he was taken out of the game in the final minutes, it was to an ovation similar to the one he got during the pregame award ceremony.

“It was an out-of-body feeling,” said Smith, who spoke softly but made a big statement with his style choice of leather harem pants that sort of resembled a legged diaper made out of garbage bags. “I never really thought I would get a standing ovation at the Garden the way I did.” Nor had he initially thought he’d ever come to terms with coming off the bench, though he credited “the vets” with keeping him mentally positive about the lineup decisions. (“If we were losing, it might be a different story,” he admitted.)

As he wrapped up his press conference before going off into the night, where he would be asked by dudes to pose for photos with him, Smith explained that the Knicks couldn’t get too ahead of themselves as they head into Friday night’s game in Boston — the first Celtics game since the marathon.

“The series never starts until the road team wins,” he said, and around the room reporters caught one another’s eyes and smiled. Hey, if something goes terribly wrong and the Knicks are eliminated early, he could do a great job as a sportswriter.

Can Anyone Explain Why the A's Are Good?