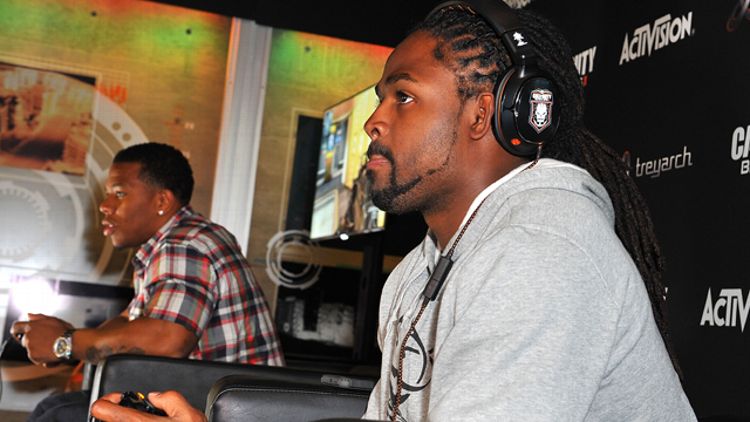 Super Bowl champions Ray Rice and Torrey Smith met at video game producer Treyarch’s studios in Santa Monica this week to settle an argument: Who would win in a Call of Duty: Black Ops II grudge match? Before they sat down to virtually duke it out on the just-released The Uprising DLC Map Pack (that’s as close to a neutral field in video games you can get; oh, and if you’re over 35, don’t be embarrassed if you don’t know what a DLC Map Pack is), we had a chance to ask them a couple of questions:

What’s your weapon of choice?

Rice: I tried the sniper rifle, but I didn’t like it. I go mostly with the Peacekeeper. You can use that and keep whacking away and moving along.

Smith: I go with the Peacekeeper, too.

What’s your strategy? Is there a “Hey Diddle Diddle” type play you use?

Rice: My strategy? Pretty simple, be the last one left. There’s nothing like 4th and 29 in this game.

Smith: For me, it varies most of the time. I just run out there, but you have to be careful. There are some real professionals out there. If I could, I would go all Rambo style, but that just doesn’t work here.

Do you use this game to keep in touch with people?

Rice: I’m a big fan of Call of Duty, so I come home from practice and everyone knows [it’s] on. [I] get all these texts from other players, friends, “Yo, what time we going on?” Also, it gives you a chance to interact with fans. I’ve given my gamer tag out a few times, and once you do that, you get hit up from all over the world. And it’s not even just Ravens fans. It’s random people happy to play this game against a professional athlete. A lot of those people are really good, too. They’ve mastered this game, so they can’t wait to play against us. It’s their Super Bowl.

Smith: I use the game to try and keep in touch with everyone. In football, you’re like brothers. That never changes, I mean we’ve already lost a lot of guys from last year’s team, but Ravens are always Ravens so I’ll keep playing them.

Ray, you have two younger brothers (Durell and Markell). Can they beat you at this? At anything?

Rice: They have no shot. Durell is pretty good, but I’m the oldest brother, and I’m too competitive. I can’t let them. Thing is, they’re bigger than me now. I’m telling you — when I wrestle one of them, I need a day off to recover before I take on the other one.

Torrey, with all the guys you play against in Call of Duty, who thinks they’re great but are really terrible?

Smith: OK, Ray left the room for a minute, so I can tell you: Ray is terrible; you’ll see. On the Ravens, though? Arthur Jones is horrible at this, but he thinks he’s great. His brother Chandler, on the Patriots, is really good. Actual, the week before the AFC Championship in New England, we were all playing against Chandler, Brandon Spikes, and all the guys on the Patriots.

You were an intern for Congressman Elijah Cummings. Any politics in your future?

Smith: I’m very interested in it — the process and what you can do for the community. I won’t say no, but we’ll see what happens. It’s definitely not a goal of mine.

How’s Rutgers going to do in the Big Ten?

Rice: It’s going to be quite the challenge. You need to recruit differently. Do everything differently. When I was 11-2 in college, I got to go to the International Bowl. You have that record in the Big Ten, and you might be playing for a national championship.

What about Maryland? When will they step up and make it to the BCS title game?

Smith: Hopefully sooner than later. They’ve brought in some players, and they’re on the right track. Still, I don’t know — but I know that we’ll make it before Rutgers.

So now you have a ring for winning the state title in New York from high school when you played for New Rochelle and a Super Bowl ring. At the time they happened, which felt better to get?

Rice: The high school ring was definitely a bigger deal at the time. That was incredible. The Super Bowl, though? I’ll say that one tops them all. It’s the Super Bowl!

Will either of you pick up the check ever again if Joe Flacco is present?

Rice: I’m a pretty fair guy. I don’t like to hear someone is paying and “over-order” or anything like that. I like to contribute, but all our offensive dinners? If Flacco is out with us, it will definitely be on him.

Smith: Fair? Not me; I’m the poor one of the group. Joe owes us! [Laughs] This is a brotherhood, but Joe should take out the whole team to dinner for the rest of his career. We all know about that deal, and that’s the power of social media. Guy gets a $30 million signing bonus, and on the way home he stops at McDonald’s. Classic Joe.

Note: In the end, Torrey Smith proved he could walk the walk. His team took down Ray Rice, 3-1, in a best-of-five showdown.