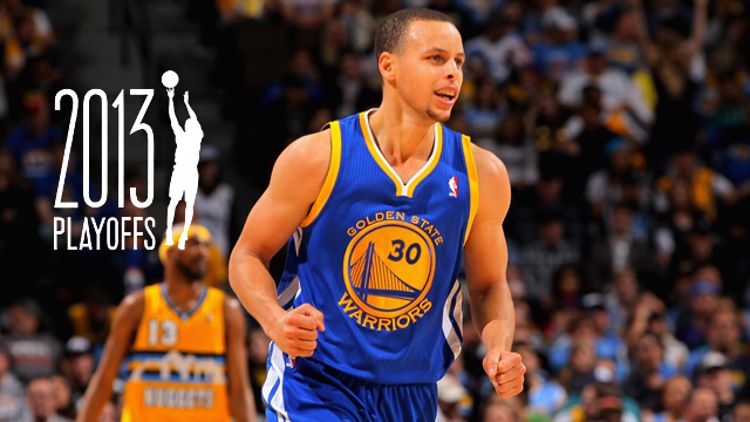 Robert Mays: Considering my own, “Oh, no, not again” reaction to Steph Curry’s twisting left ankle last night, I can’t imagine what that image must’ve looked like for Warriors fans. When his foot turned late in the third quarter, Curry was 30 points into what was, by default, the biggest game of his professional career. This is the first playoff trip for Golden State since the glorious 2007 postseason, and with his fellow All-Star teammate David Lee done for the year, Curry’s performance has never mattered more. The Warriors played Denver to a standstill in Game 1, and behind a shoot-the-lights-out, dozen-or-so-assists night from their point guard, they were about to have Game 2, home court, and, seemingly, a shot to steal a series in which no one gave them much chance. Then Curry limped off the court and toward the bench, and the Warriors’ hopes hobbled off with him.

I don’t know what that stretchy elastic band was, or how much good it actually did, but when Curry was done loosening that joint and got up to make his way back to the floor, I was relieved. For the most part, these playoffs will play out like we figured they would. Miami will roll, OKC probably will, too, and we’ll have the Finals everyone will complain about but secretly wants. What makes the road there worth the time are the smaller, career-altering moments that come along with it. Carmelo Anthony has the most to gain from these playoffs — that spot among the league’s elite that he still has yet to earn — but Curry isn’t far down the list.

The Warriors have intrigued the world’s League Pass watchers all season, but in the larger conversation, Curry’s name isn’t used with those of other superstars. There are a few possible explanations for that — 10:30 EST tipoffs on ESPN, lingering effects of a mid-major college career, the “shooter” label obscuring how completely he’s developed his offensive game — but the best is the lack of exposure when it all matters most. And with the help of those stretchy green bands, hopefully last night is the just first step in rectifying all that.

netw3rk: Last night, J.R. Smith received the Sixth Man of the Year Award and hit his first four shots, including a 36-foot buzzer-beater that prompted him to take a knee, do a rock-guitar windmill, and wave at the sky …

He also took numerous shots that you could reasonably call “bad,” finishing with 19 points on 7-of-15 shooting; ordered and received bacon at Katz’s Deli; spoke flawless Ukrainian to a waitress at Veselka; and hacked the AP’s Twitter account, causing the stock market to dip, making millions on his portfolio of shorted stocks. Some of those things didn’t happen, but the ones that did were just as unlikely. The Knicks lead the series, 2-0.

3. Dwyane Wade Follow-Up Dunks That Begin 30 Feet From the Hoop

Chris Ryan: The other day, during Game 1 of the Spurs-Lakers series, a bunch of people on Twitter were talking about how nobody in the game called a timeout like Gregg Popovich. Whenever the Lakers would start to feel themselves, Pop would brusquely tap his shoulders for a 20-second TO, organize his squad, say something inspiring like, “You’re all replaceable,” and send them back out to step on the Lakers’ necks. It got me thinking about the art of run-killing.

I kept thinking of this watching the Warriors and Nuggets last night. Every time the Nuggets would get the deficit down to 10 or eight points, and the crowd would get back into it, the Warriors had an answer. Their release valve was different than the Spurs’, though. Rather than have coach Mark Jackson call a timeout and tell some parable about the old man, the thimble, and the donkey, or whatever it is he says in huddles (I actually really like Jax miked up), they just had Harrison Barnes and Klay Thompson throw daggers at the heart of the home team. As you just read, it was Steph Curry’s night, but I’m almost used to seeing him go nuts.

Barnes was played out of position at the 4, had a ‘Nique-esque dunk on Anthony Randolph …

… and scored 24. Thompson, who I’ve never liked for the completely ridiculous reason that I imagine he’s happy when Steph Curry gets hurt because it means more shot attempts for him (I’m serious. I seriously think this), dropped 21, going 5-for-6 from behind the arc. He looked great. Well, actually, according to our own netw3rk, he looked like “a cross between the engineers from Prometheus and an unfinished police sketch.”

For both Thompson and Barnes, it wasn’t about the quantity of points, or even their efficiency (the two went a combined 17-of-25 from the field, which is illegal in most states); it was the timing. Each seemed to score at the exact moment the Nuggets were wandering out of the wilderness. Oh, you guys want to make this a single-digit affair? There was Barnes or Thompson (or Jack, or, yes, Curry) with the response. And there was something about the ripped-net jumpers that the Warriors’ shooters were making that seemed even more devastating than a dunk. Like … we can get you from anywhere. Don’t sleep.

Danny Chau: Even in the postseason, there is refuge for fans of NBA esoterica. For instance, it was a great night for former cult favorite Anthony Randolph, who scored 14 points without logging any other meaningful stat — his rebound and steal came in the last minute of a blowout — which is essentially his dream role in the league. But it was an even better night for Anthony Randolph’s perpetual struggle face. It’s a miracle, that face. He’s never not looking like he’s crying. Even at its most tame, his face has the distinct mark of a post-sob afterglow. It’s something that has probably been with him since childhood. It’s a face that should be on posters and distributed to new parents. We’ve all been given the “If you keep making that face, it’ll stay that way” warning as kids. Finally, we have Randolph as the human face to an apparently very real affliction. Thankfully, it has an entire playoff series in the national spotlight to spread awareness.

7. KICK IN THE DOOR, WAVING THE BAZEMORE