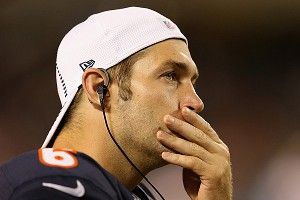 He is listening to “Call Me Maybe.” You know that, right? This is crazy. Just relax, Jay Cutler. Just simmer down and take your victory in Week 1, where you admittedly looked like Tecmo Bowl Dan Marino, with dignity. Don’t come out here and call your receiving corps “dudes.” Don’t taunt Charles Woodson. Don’t dare Dom Capers to let the wolves loose on your person. I know Raheem Morris once said “Stats are for losers” (Raheem Morris!), but don’t brush aside being 1-4 against the Packers in your last five games, or the fact that you have 11 picks in those five games, or the fact that one of those games inspired a YouTube video called “Jay Cutler: Interception Machine,” in which you throw passes and Packers DBs pick you off while heavy metal and Beavis and Butt-Head chuckles play in the background. Also? Get a haircut.

Maybe I’m not the right guy to gauge Jay Cutler’s prudence, but I couldn’t be more about this. Bears-Packers has always been a different sort of professional rivalry, one that is more easily likened to something from the college game. Brady Hoke refuses to call Ohio State “Ohio State,” and Lovie Smith’s first stated goal after coming to Chicago was beating Green Bay.

I’m not willing to say that one thrashing of the Colts is indicative of some new era of offensive glory in Chicago, but I’m not faulting Jay Cutler for feeling himself a bit. For his entire time in Chicago, he’s been saddled with a receiving corps and an offensive line that have both hovered among the worst in the league. Never has a Bear finished with more than 100 yards in a game against Green Bay since Cutler’s arrival. Among the list of receiving leaders in those games are Rashied Davis and something called a Devin Aromashodu. Alshon Jeffery has played exactly one NFL game, and I feel OK saying he’s better today than either of those guys ever was. So am I cool with Jay Cutler saying “Fuck it” and embracing his calling as the villain in a Liam Neeson movie? Hell yes, I am.

About Last Night: Pack Attack Does In Chicago