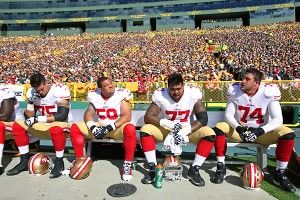 There are those defining moments in life that are so memorable that we can’t help but recall where we were when they happened — my first kiss (Michelle Poirier, back of the bus, fifth grade), my first viewing of There Will Be Blood (Cineplex in Harrow, England), my first Cheesy Gordita Crunch (Lake Zurich, Illinois, Taco Bell). The news about the NFL releasing its all-22 and end-zone film was one of those moments.

The release of the end zone film has made watching the intricacies of offensive- and defensive-line play easier than ever. To celebrate, we decided to bring you a weekly set of awards for the big boys. So without further delay, we present the inaugural Trenchies. 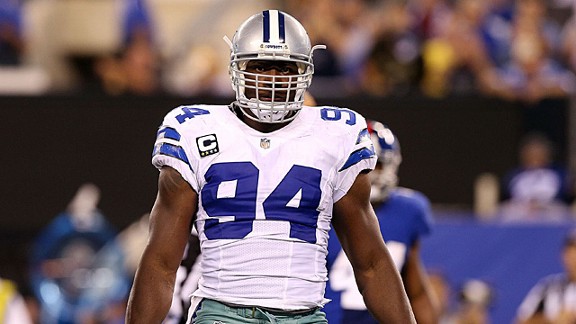 Ware could probably win this one almost every week, but let’s consider this a lifetime achievement award to go with an excellent showing against the Giants. Ware needed just half a sack to become the 29th man in NFL history with 100 career sacks. On the first play of the second quarter, he got it by cleaning up after Gerald Sensabaugh whiffed on Eli Manning.

The eighth-year Troy product has been the best pass rusher in football for some time, and only Reggie White, the greatest pass rusher of all time, took fewer games to get to 100. Ware added another sack later against the Giants, but maybe the most impressive part of his Week 1 performance, and the reason he’s clearly become one of the two most valuable defensive players in football is his play against the run. Throughout Dallas’s win against the Giants, Ware’s ability to maintain leverage on the edge and squeeze plays down allowed the Cowboy’s new-look linebacker duo to scrape and make plays (notably on second down during the Cowboys’ second-quarter goal-line stand). Aside from Julius Peppers, I’m not sure there’s a more complete edge defender in football, and Ware is one of the guys that’s going to make this all-22 film fun.

I just couldn’t pick one guy. It takes a lot for an offensive line to really jump off the screen during a broadcast, but that’s how good San Francisco’s group looked up front on Sunday. It’s not surprising, mostly because what the Niners are capable of up front barely makes sense.

San Francisco’s center, Jonathan Goodwin, the smallest guy on the line, is 6-foot-3 and 318 pounds. Right guard Alex Boone is 6-foot-8. Left guard Mike Iupati weighs 330. Let’s be clear that men built like this should not be able to move like these guys do. Clay Matthews got the better of left tackle Joe Staley on a few passing downs, but for the most part, the Niners were excellent up front, and it was a product of the line’s mobility as a whole. Below is just one of the many plays where that was evident. 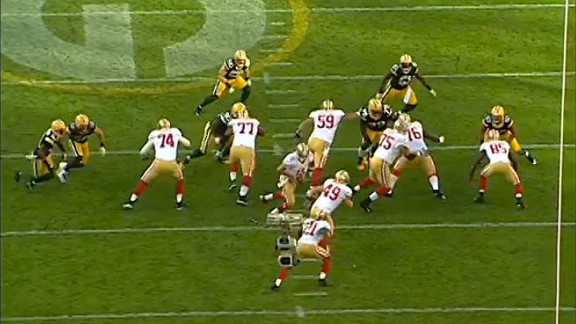 The Niners have first-and-10 from their own 37, and they’ve lined up in the I-formation with a tight end to the right and two receivers split out to the left. The ball is snapped, and almost instantly, it’s clear why this is going to be a big gain for San Francisco. The right guard (Boone, no. 75) and right tackle (Anthony Davis, no. 76) are responsible for the defensive tackle lined directly over Boone and the inside linebacker lined up over Davis. Rather than executing a combo block up to the linebacker, San Francisco uses angles the defense has provided. Davis blocks down on the tackle while Boone pulls around the outside of the formation and meets the linebacker as the defender fills toward the ball.

This was just one of the plays where Boone, who played tackle at Ohio State, looked surprisingly good pulling and moving to the second level. The most impressive block on the entire play, though, goes to Goodwin. Goodwin (no. 59) is tasked with cutting off back-side linebacker A.J. Hawk, and despite all the run action moving to Hawk’s left from the time the ball is snapped, Goodwin uses a great first step to easily beat him to the spot. 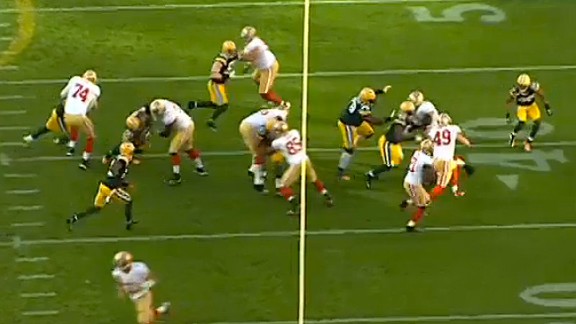 Davis, as he did much of the game, struggled to sustain his block after initial contact, but he does enough to slow down Ryan Pickett (no. 79). The left side of the line did what it needed to do in sealing off the back side, and a nice final block from the fullback make it a relatively easy 21-yard burst for Frank Gore.

Few teams have spent more resources on its offensive line than San Francisco has in recent years (Iupati, Davis, and Staley were all first-round picks), and it has a lot to do with the quick turnaround that took place in the Bay. That, and the whole Patrick Willis–NaVorro Bowman–Justin Smith thing they’ve got goin’ on. But, ya know, the offensive line, too!

The first time I saw Henry Melton play football was in the fall of 2005, when the Texas Longhorns visited Ohio Stadium to take on Ohio State. At the time, I thought there was just no way this guy could ever succeed as a defensive lineman in the NFL. Mostly, it’s because he was playing running back. The 290-pound Melton eventually made the switch, and after being drafted by Chicago in the fourth round in 2009, he’s developed into a valuable starter for the Bears.

Melton had two sacks in Chicago’s win over the Colts, but the most exciting bit of his play was the Bears’ new-look passing-down setup. When Chicago drafted Shea McClellin in the first round this spring, the thought was that he’d be the complementary pass rusher opposite Julius Peppers. Apparently, the Bears had something else in mind. 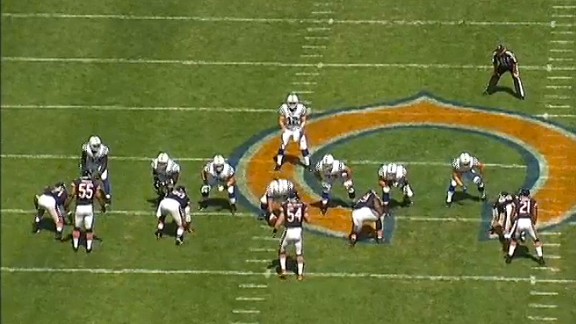 In an effort to get all its best pass rushers on the field at once, the Bears rolled out a look in which Melton and Peppers line up as three-technique tackles (i.e., lined up on the guard’s outside shoulder) while McClellin and the criminally underrated Israel Idonije manned the outside. The result was a pocket that crumbled from the inside out all game and a dearth of clean passing windows for Andrew Luck. With the Bears’ ability to stop the run and force teams into third-and-long, they should have plenty of opportunities to have these four out there at the same time.

The Dan Bazuin No-Show of the Week

Most football fans are probably unfamiliar with Dan Bazuin, and that’s actually the point of this award being named in his honor. Bazuin was a second-round pick of the Chicago Bears back in 2007. He was cut before his second training camp. There are more notable pass-rushing disappointments, but none closer to my heart. I will never forget you, Dan Bazuin. 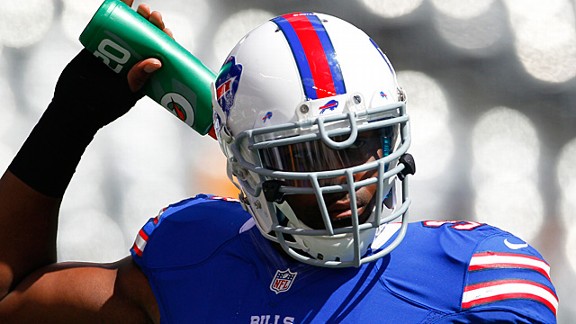 The NFL Network’s Mike Lombardi — gentleman, scholar, procurer of the best doughnuts I have ever eaten — came on the B.S. Report podcast Monday and said something about Mario Williams that initially sounded strange. “He’s never been a pressure guy,” Lombardi said. “He’s a sacker.” My initial thought was, “Is there a difference?” Upon further review, the answer is, “Why yes … yes there is.”

It’s hard to imagine two players with more different run-ups to Week 1 than Williams and whoever was playing right tackle for the Jets. Williams got $96 million to come to Buffalo. Wayne Hunter got shipped to St. Louis, but not before he was handed the blame for what seemed like everything from New York’s muggy July to Taylor Kitsch’s box office struggles. So when Williams and the Bills played host to Hunter’s replacement, Austin Howard, and the Jets in Week 1, everything seemed set up for Mark Sanchez to be treated poorly. Well, let’s just say it didn’t go that way.

Williams was a non-factor against the Jets; after watching the tape, Lombardi’s distinction becomes clear. Rather than coming hard off the ball and getting into Howard’s pads in hopes of driving him back to the quarterback, Williams often elected to get his hands on Howard as a means of creating space. If the pocket were to shift in any way, this would allow Williams to get off the block and drag down a scurrying Mark Sanchez. Rarely though is Williams the one shifting that pocket. Howard played it just as he should’ve — by getting into his pass set quickly and patiently waiting for Williams to come to him. The result was Howard often being in his set for a full count before Williams even made contact. It’s certainly too early to worry about whatever money Buffalo shelled out for Williams this offseason, but Sunday was far from the type of announcement Buffalo was looking for from its shiny new front seven.