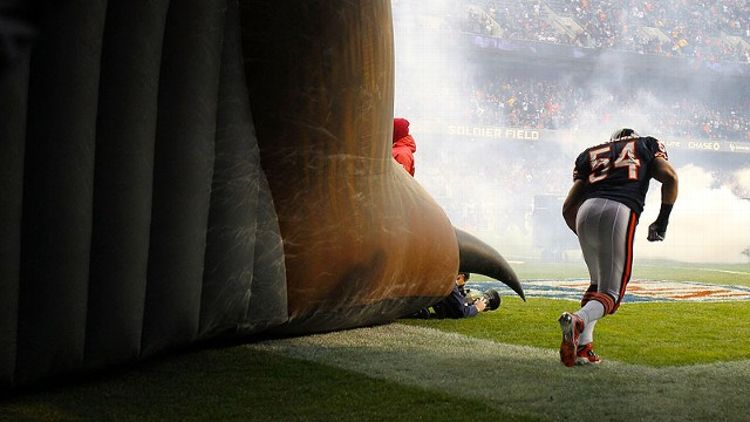 To those looking for the signs, Brian Urlacher’s time in Chicago ended about two months ago. Lovie Smith’s departure certainly didn’t help, but it was Rod Marinelli’s decision to turn down an offer to stay on as the team’s defensive coordinator that likely sealed Urlacher’s fate. I’m not saying that to raise any new hypotheses — the regime change in Chicago has been cited by nearly everyone who’s looked back at Urlacher’s Bears career. I’m saying that for some of us, there was time to prepare. And it still wasn’t enough.

The timing of Urlacher’s arrival in Chicago perfectly positioned him to become the city’s central sports figure. Two years removed from Michael Jordan, in a town without a World Series in 83 years, for a franchise defined by its middle linebackers, when the Bears drafted Urlacher ninth overall in 2000, it was a match made in jersey-sales heaven. That bald head and that inability to smile made Urlacher the clear heir apparent to Butkus and Singletary, and from the beginning, he was.

When Lovie Smith got to Chicago in 2004, it was a perfect match between a new head coach’s system and his best player. A college safety who was excellent in coverage, Urlacher was an ideal fit to play the deep-dropping middle linebacker in Smith’s Tampa 2 defense. The first season of Smith’s tenure was a 5-11 disaster — largely a product of a four-headed quarterback monstrosity made up of Craig Krenzel, Jonathan Quinn, Chad Hutchinson, and Rex Grossman. By the next season, the quarterback play hadn’t gotten much better — a rookie Kyle Orton was forced into a starting role because of a Grossman injury and proceeded to have one of the worst seasons in NFL history — but it didn’t much matter. The Bears went 11-5 behind one of the decade’s best defenses (first in Football Outsiders’ DVOA; allowed 12.6 points per game), and the man behind that defense was Urlacher. He walked away with the league’s Defensive Player of the Year award, and the transition to franchise icon was complete.

Like with any great player, there were stretches when it was hard to appreciate him fully. When the team’s record dipped in 2007 and Urlacher revealed that he’d developed permanent back and shoulder issues, I remember Bears diehards like my father were ready to show him the door. It was only when Bears fans saw life without Urlacher that they realized what they had with him. The Bears went 7-9 when Urlacher missed the final 15 games of the regular season with a dislocated wrist, and the following year, with Urlacher back and Julius Peppers in the fold, it was back to the NFC Championship Game.

I’m aware that the current version of Brian Urlacher is not even the version of three years ago. He played at a level far below average last season, and citing win totals based on the presence of a single player is always a silly exercise. But I also know that there’s something to be said about the belief of a locker room. The outpouring of praise from past and present teammates following the Bears’ announcement was unlike anything I can remember. If Marinelli had returned, it likely would’ve made sense, for continuity’s sake, to keep Urlacher in the middle of the Bears defense for one more run. With Marinelli gone and a new staff in place, letting Urlacher walk in favor of a higher-upside, same-price alternative like D.J. Williams makes sense.

That’s the problem with fandom, though — rarely does it make any sense at all. Moving on from Urlacher and trying to get younger across the defense is logical, but how I’ll feel watching that team next year can’t be logical, in the same way his teammates probably think there was a certain comfort to having Urlacher there — no matter how much his play had slipped. What had been lost in the way of physical tools didn’t outweigh the mental and emotional anchor, even if it should’ve. For the first time in 14 years, the Chicago Bears will start a season without Brian Urlacher, and that’s just hard to reconcile.

As Bill Barnwell wrote, the emotions involved with late-career stars make negotiations difficult. Phil Emery’s obligation is to build a winning football team, not appease the compromised voices of fans and fellow veterans. That said, I can see where Urlacher considered the one-year, $2 million offer a “slap in the face.” When Urlacher arrived in Chicago, the Bears were a franchise lacking any discernible identity. It had been eight years since a real star had worn that uniform, and Urlacher willfully and effortlessly took on the task of reestablishing the tone of a storied franchise. If the Bears were to win the Super Bowl next year, or the year after, it would feel like something was missing. This century, Brian Urlacher was the Chicago Bears, and even though it probably had to, I wish it didn’t end this way.