Anatomy of an Upset: Florida Gulf Coast’s Run to the Sweet 16 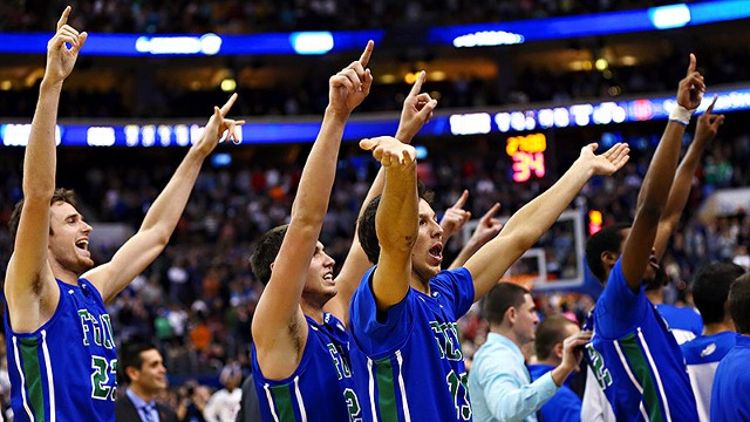 Florida Gulf Coast University is the most exciting version of the Cinderella story there’s ever been. With two thrilling NCAA tournament upsets, and featuring a colorful cast of characters and a series of mind-bending alley-oops, we take a look at how the Eagles have fully captured our attention.

The mystery surrounding FGCU stems largely from its underwhelming record. The Eagles finished second in a weak conference and lost six games to teams that finished below .500. They beat one good team — Miami — very early in the season, and were throttled by the three other tournament teams (VCU, Duke, and Iowa State) they faced during their non-conference schedule. There was simply nothing that hinted at the two things that have now become widely held beliefs — this team is well coached and they have talented players.

Head coach Andy Enfield was a former NBA assistant turned shooting coach before finally landing back in the college ranks. His experience at the highest level of the game is evident in the team’s style of play, particularly on offense. Enfield runs a high-octane system set on pushing the ball up the court at all times, spacing the floor, and running a high volume of pick-and-rolls. It is actually eerily similar to the mid-2000s Phoenix Suns.

They look to run early and often, and they do it better than nearly every team in college basketball because of the shots they seek on the break. The Eagles’ charges consist mostly of either attacking the basket directly on the break or spotting up along the 3-point line to either shoot early 3s or work off a shot fake to get to the rim.

In the half court, the team runs a few sets but primarily uses spread pick-and-rolls to either create a direct look or a drive-and-kick series that leads to a shot. Their ball movement out of this action is similar to what you’d see at the NBA level, with disciplined spacing and a routine use of the “plus one” pass, an uncommon sight at the college level because of the availability of first-pass shots.

Any system is only as good as the players running it, and though his personnel is somewhat limited — this is a low major, after all — Enfield does have a collection of intriguing talent.

Quarterbacking his offense is sophomore Brett Comer, a creative distributor who runs the show nearly every second he’s on the floor. All the decision-making goes through the 20-year-old guard, and that partially explains how the Eagles can be such an up-and-down team. Few college coaches trust their lead guards to run their offenses, much less a freewheeling one like Comer. But Enfield has empowered his point guard, and when he is good, the team, as they’ve shown us these past four days, is, too.

Comer is flanked by senior guard Sherwood Brown and fellow sophomore Bernard Thompson. Brown is a versatile scorer who can play the role of lead guard and a power forward in the same game. Thompson finished second on the team in scoring (behind Brown) and shows a lot of promise going forward.

The frontcourt also features an intriguing prospect in Chase Fieler. The 6-foot-8 junior can handle, shoot well from distance (though he hasn’t done so in the tournament), and has NBA athleticism.

Though it’s still unclear whether he has the ability or willingness to defend at anywhere near an acceptable level, Fieler acts as an explosive stretch 4 for FGCU.

Enfield is creative in piecing together a manageable defensive unit from a group that likely would struggle to stay competitive under a less flexible coach. The Eagles use a 1-2-2, three-quarter court trap, a 1-3-1 zone, and a strict 3-2 zone in small doses. But they primarily lean on a mixture of man-to-man defense and a matchup zone to hide their limitations.

This combination of system and personnel comes with some volatility. If the Eagles face a team that can pressure them in the full or half court (think VCU and Duke), or they go cold from 3-point territory, they could look rather pedestrian. On defense, the use of multiple zone schemes patched together means that any team that gets hot from the outside can also do them in. In a weird twist, this is a team worthy of both a 15-seed and an appearance in the Sweet 16.

Brown and Comer stole the show with their charisma and flashy play in the first two rounds, but Thompson is a big reason the Eagles are here. At a rail-thin 6-foot-3, Thompson seems to lack the ideal build for Division I basketball, but thanks to some excellent training, likely a result of having a head coach with NBA experience, the young guard flashes a polished game full of shot-fakes, off-the-dribble pull-up jumpers, and pretty floaters, like this one he opened the game with against San Diego State.

It all added up to two straight 23-point performances on a combined 14-28 shooting from the field. To top things off, Thompson found his way to the line 20 times and snared 11 rebounds in the two improbable wins.

Finding the Right Matchups for Their Changing Defenses

Two ways to take advantage of FGCU’s ever-changing defensive scheme are to exploit their lack of bulk with a specific matchup inside or simply employ personnel that can shoot over the top of their zones. Neither the Hoyas nor the Aztecs proved capable of carrying out on either one.

Georgetown not only lacked the shooters — only star forward Otto Porter and guard Markel Starks are threats from the outside — but stuck with their hybrid Princeton offense instead of calling set plays that allowed the talented Porter to attack FGCU down low. It was a combination of events that basically eliminated the Hoyas’ best player and led to a number of disjointed possessions.

San Diego State faced similar problems in its game. The Aztecs are not a team built to win games from behind the arc, yet the team shot 23 3-pointers — well above their season average of 18 — as they attempted to stave off the upset bid. Not only did they convert them at a middling rate (34.8 percent) but the steady diet of jumpers created ample opportunities for the Eagles to run out in transition off long rebounds, exactly the way they want to play.

Though his 24 assists — most of which came with a flair rarely seen in college guards — stole the headlines, they weren’t the key stat for the Eagles’ precocious guard. It was Comer’s ability to protect the basketball, not dish it out, that transformed the team into a giant killer. The sophomore had just five turnovers — a minuscule figure given how he plays and how much he handles the ball — over the course of the two upset wins. To put that number in perspective, Comer averaged five turnovers per game (his season average is 3.5) in the six ugly losses the Eagles have had since late December.

Against Georgetown, it was senior Eddie Murray. The 6-foot-8 forward had nine points (one off his season high) and five rebounds while tirelessly setting an endless number of ball screens in the half court during his 31 minutes of action. It was his ability to screen and dive to the rim that helped free Comer and the rest of the Eagles guards to create offense when their transition attack didn’t produce a good look.

In their game against San Diego State it was junior guard Christophe Varidel who stepped in to keep the team’s offense humming when Brown was saddled with foul trouble. The Swiss guard isn’t the off-the-dribble creator his fellow backcourt mates are, but Enfield helped Varidel put his stamp on the game with a handful of sets that allowed him to find space to convert some crucial 3-point shots.

Like the rest of the team, Varidel found a hot streak from behind the arc at the right time and gave the Eagles the extra boost they needed to make history.