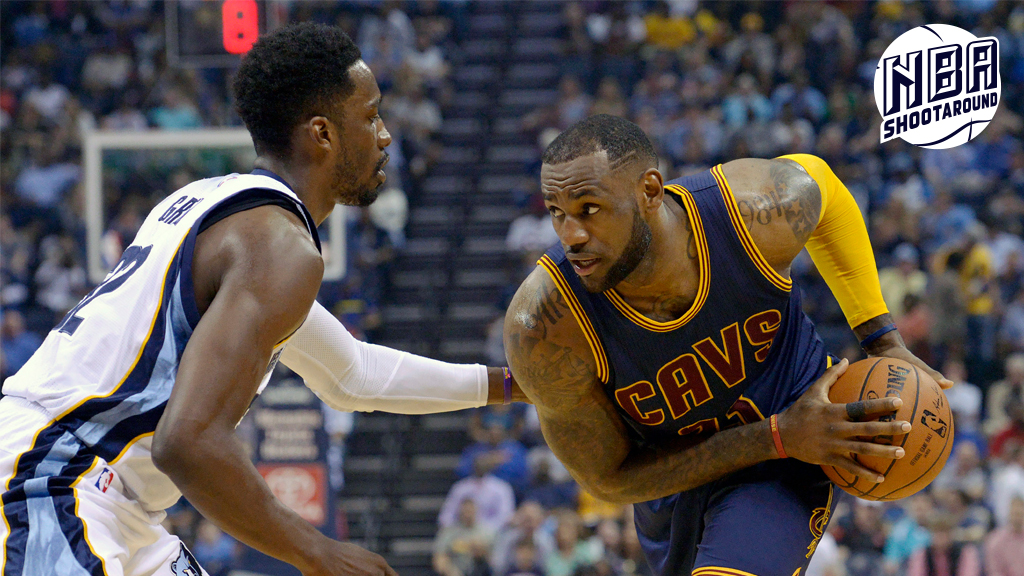 Danny Chau: “… these guys look like the San Antonio Spurs passing the basketball.”

That’s what Grizzlies announcer Sean Tuohy said of a play the Cavs ran with under eight minutes remaining in the third quarter. It was a play that could’ve ended with a Kevin Love 3 from the right wing, or a LeBron James reverse layup and a foul along the baseline, or a Kyrie Irving 3, or a J.R. Smith 3. The ball was swung from one side of the floor, up the middle, and to the other; only then did it find its destiny: LeBron in the left corner, waiting. Like, last-minute table-for-two on Valentine’s Day waiting. LeBron had so much time in the left corner, he rotated the ball to get a feel for the seams and took a mocking power dribble, as if he were about to shoot a free throw. For a split second, Marc Gasol stood in the paint and slumped his shoulders, before realizing, Jesus Christ, no one else is going to rush him? Gasol managed to get over there and throw his arms up, but, whatever, it doesn’t matter.

Two possessions later, with the Cavs up 18, Dave Joerger called a timeout, and the broadcast queued up Lenny Kravitz: I want to get away … “The Grizzlies have encountered a buzz saw,” play-by-play guy Pete Pranica said, heading into a commercial break. I wanna flyyyyy awaaaaaay …

It would get so much worse. In those last eight minutes of the third quarter, the Cavs scored 27 points on 10-for-13 shooting against the third-best defensive team in the league. The Cavs led by 29 at one point. 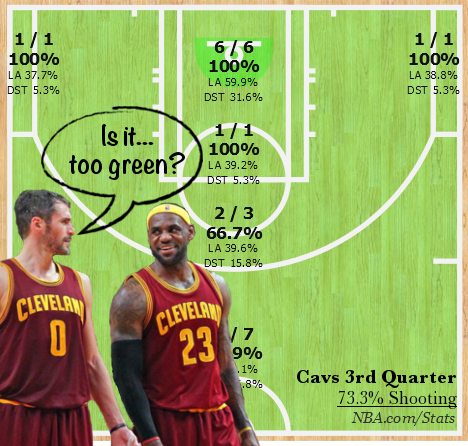 Kevin Love, intent on quashing all the gossip (or not, who knows?), went 5-for-5 in the third quarter, en route to a lovely 22-and-10 night. This one game doesn’t change the fact that, on most nights, Love looks like he’d rather go through a Milgram experiment than be around his teammates, but so what? If we’ve learned anything from Kobe Bryant’s press tour, it’s that caring about your teammates is overrated; only an exclusive bunch of people are given the opportunity to win with an all-time great, and that isn’t an opportunity to be squandered. Maybe that’s starting to sink in. The Cavs are rolling. The latest round of Cavs chatter has been as tedious as the on-court product has been thrilling. The Eastern Conference is Fox; most of it is in flames. The Cavs are an unholy amalgam of Empire and The Last Man on Earth, and thank god for that. At least there’s something there worth watching. 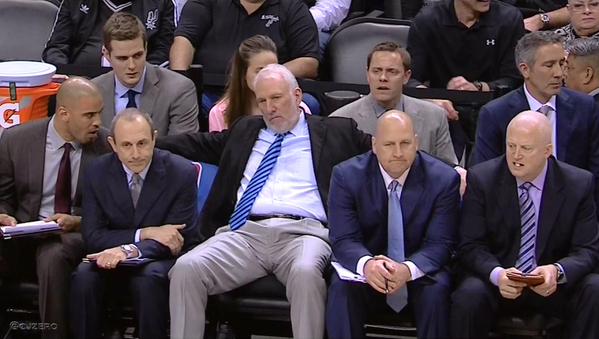 Chris Ryan: The Spurs came out of the All-Star break and promptly lost four in a row to the Clippers, Warriors, Jazz, and Blazers. Since then?

Have they had the kind of soft schedule that inflated Dallas’s ego in the first half of the season? Sure. Have they beaten any for-real Western Conference competition since they hit the nitrous tank? Not really. Could I coat the rim of my margarita glass with all of these grains of salt? Bottoms up.

Kawhi is back. Tony is back. Putting 130 on OKC — even a Thunder team without Kevin Durant and Serge Ibaka — isn’t just impressive, it is some elite Doug Moe shit. And it’s not just last night’s point total that should have Houston — San Antonio’s current first-round playoff foe — shaking in its sneakers. It’s the manner in which the Spurs scored. This was that crisp, fully operational, Tony Parker–playing-flute-solos-in-the-paint (where he scored 10 of his 21), one-extra-pass-for-the-wide-open-3 offense that broke up the Heatles.

These guys are coming to break up your band next.

Andrew Sharp: Stop complaining about free throws. Just be amazed that the Rockets are about to be the Western Conference third seed in the NBA playoffs by playing like this. There are a dozen or more plays during every Houston game in which someone throws James Harden the ball, he jab-steps back and forth for 10 to 15 seconds, and it all leads to a bad shot. Or a foul. Or maybe a last-second pass. That’s the offense. And it works!

It’s just incredible to watch a good NBA team rely this much on one player. It’s like watching a high school team that always throws it to the one kid who’s getting a college scholarship.

Theoretically, Dwight Howard’s return would reduce the burden here. In practice, Harden has already announced that he has Dwight’s blessing to continue playing the same way. And you could see why last night.

The Rockets got off to a sluggish start, with Howard playing the first few minutes last night against the Pelicans. They were down 15 when Howard left with seven minutes left in the second quarter, and Harden returned shortly thereafter. By halftime, he, Trevor Ariza (22 points for the game), and Donatas Motiejunas (21 points) had cut it to three. In the second half, they blitzed New Orleans with and (mostly) without Howard, and Houston survived a late rally to move Brow’s playoff hopes a little closer to the grave.

I’ve joked all year with Chris Ryan about loving the Rockets come playoff time, but now I’m really curious. Not because I believe in them, but more because I have no idea what to make of them. If Dwight can come back to shore up the defense and especially the defensive rebounding, they could be a fourth title contender in the West. They are the one team in the past two years that has consistently given the Spurs problems.

But if their shot at a title depends on Howard’s health, he’ll also have to stay out of the way on the other end for this to work. Because … the offense flows better when James Harden is stopping the ball for 10 seconds at a time?

It really might. Also, I can’t believe the cooking dance is a real thing and that it happens even at Rockets away games. This team is amazing, man.

They're facing forward now. RT @00rocketgirl Everyone always turns around to try to rub it in when we're at a road gm pic.twitter.com/LQaTynSisu

How to Tell If Your Team Is Tanking

Jason Gallagher: Typically, when an NBA team wins a game, the franchise expresses some form of joy through the art of the victory tweet. The excitement is displayed in a variety of ways, whether it be a fist-bump emoji …

… or the all-encompassing hashtagged exclamation point.

Pretty much all of the winning teams showed some form of delight in their victory tweets last night. Some, like the Brooklyn Nets, posted sponsored victory tweets. Side note: Someone at Party City is so fired.

And then we come to the Lakers, who beat the Timberwolves, 101-99, in overtime, in one of the closest contests of the evening. Despite the narrow margin of victory, the game itself was a slow burn, in which neither team looked particularly eager to win. Still, the important thing to remember is that the Lakers won a close game — on the road — in OT.

Can someone please check on the person running this account to make sure they haven’t hyperventilated from elation? Gracious. The only thing missing here is a sigh spanning 56 characters.

For anyone who’s lost, that tweet roughly translates to “We won. Motherfucking Jordan Clarkson.” No emoji. No hashtags. No exclamation points. Just the most matter-of-fact victory tweet in the history of basketball after an overtime win. 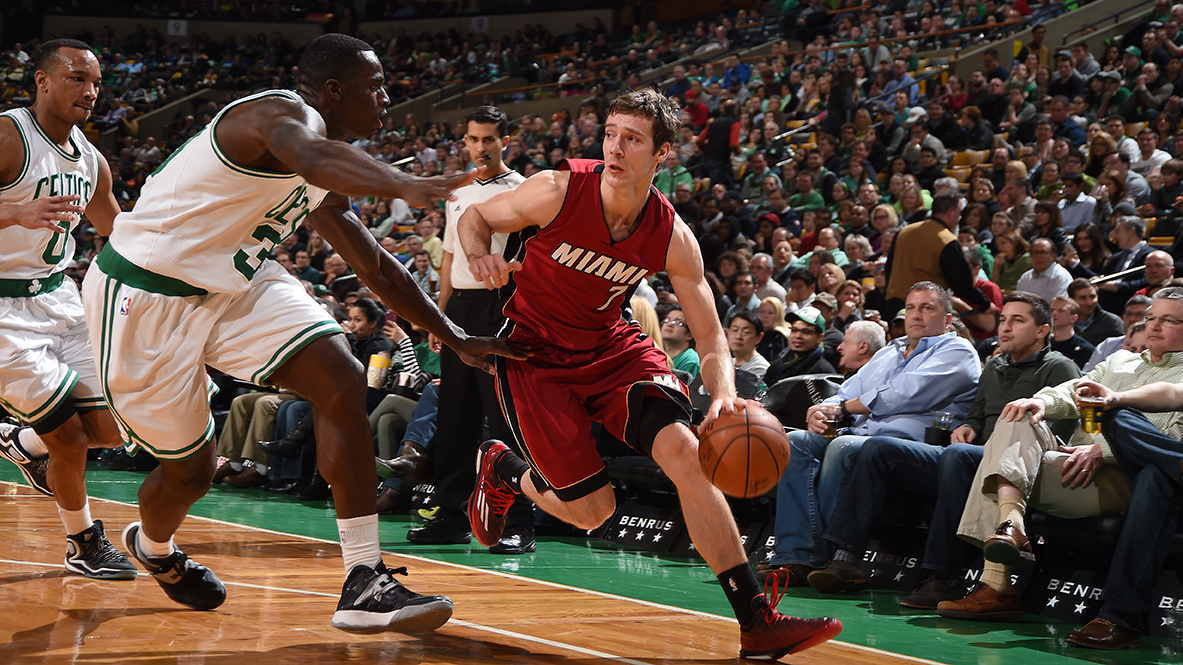 Jason Concepcion: The race for the bottom three Eastern Conference playoff seeds is less a competition among professional basketball teams than a disjointed series of completely random events. Five teams — the Nets, Pacers, Hornets, Celtics, and Heat — separated by two games, are dueling for the right to be a springtime punching bag. Which teams ends up making it is currently being decided by a butterfly, just now emerging from its cocoon somewhere in Patagonia.

The Pacers recently won 15 of 20, and they own a 12.7 post–All-Star break net rating. Indy fans were openly dreaming of the 6-seed. Then the Pacers dropped six in a row before beating the (currently) fifth-seeded Washington Wittmans on a game-winning layup.

Evan Turner staggered from two late game-killing isos against the Pistons on Monday, only to redeem himself with a 19-point, 10-rebound, 12-assist triple-double romp over the Nets the following night. On Tuesday, the Heat lost to the Bucks — who came into the game losers of six straight, including a triple-OT loss at Brooklyn — on a Khris Middleton broken-play dagger, after Milwaukee stormed back from 16 down to outscore Miami 24-9 in the fourth.

The Heat came into Wednesday night’s game against the Celtics sitting on the 7-seed and leading Boston by a game. Hassan Whiteside’s hand required 10 stitches after he caught it on the rim while trying to contest a Sky Miles Plumlee dunk in Milwaukee the night before. Whiteside sat out against Boston, cheating the basketball world out of Whiteside-Olynyk II. Also out was Dwyane Wade, who was suffering from general knee oldness, after emerging from the hot-tub time machine to win Eastern Conference Player of the Week.

So, cue the butterfly. The Heat, down two key players, on the second night of a back-to-back, on the third game of a four-game road trip, spent three and a half quarters throttling the Celtics with a series of vape-inspired small-ball lineups. Mike Beasley, who doesn’t get enough credit for being an enormous draft bust, spent a not inconsiderable amount of time at the 5 last night. AT THE 5. Goran Dragic celebrated the life and career of Steve Nash by doing a credible Canadian Jesus impression on the way to 22 points and seven assists.

Heat over the Celtics, 93-86, and no one has any idea what will happen next.

The Wizard in D.C.

Ryan: Sure, he got stuck with Wizards-Pacers. But his countryman Luis Scola missed two free throws, and that means FREE CHICK-FIL-A.

This was so much better than the Wizards-Pacers game. 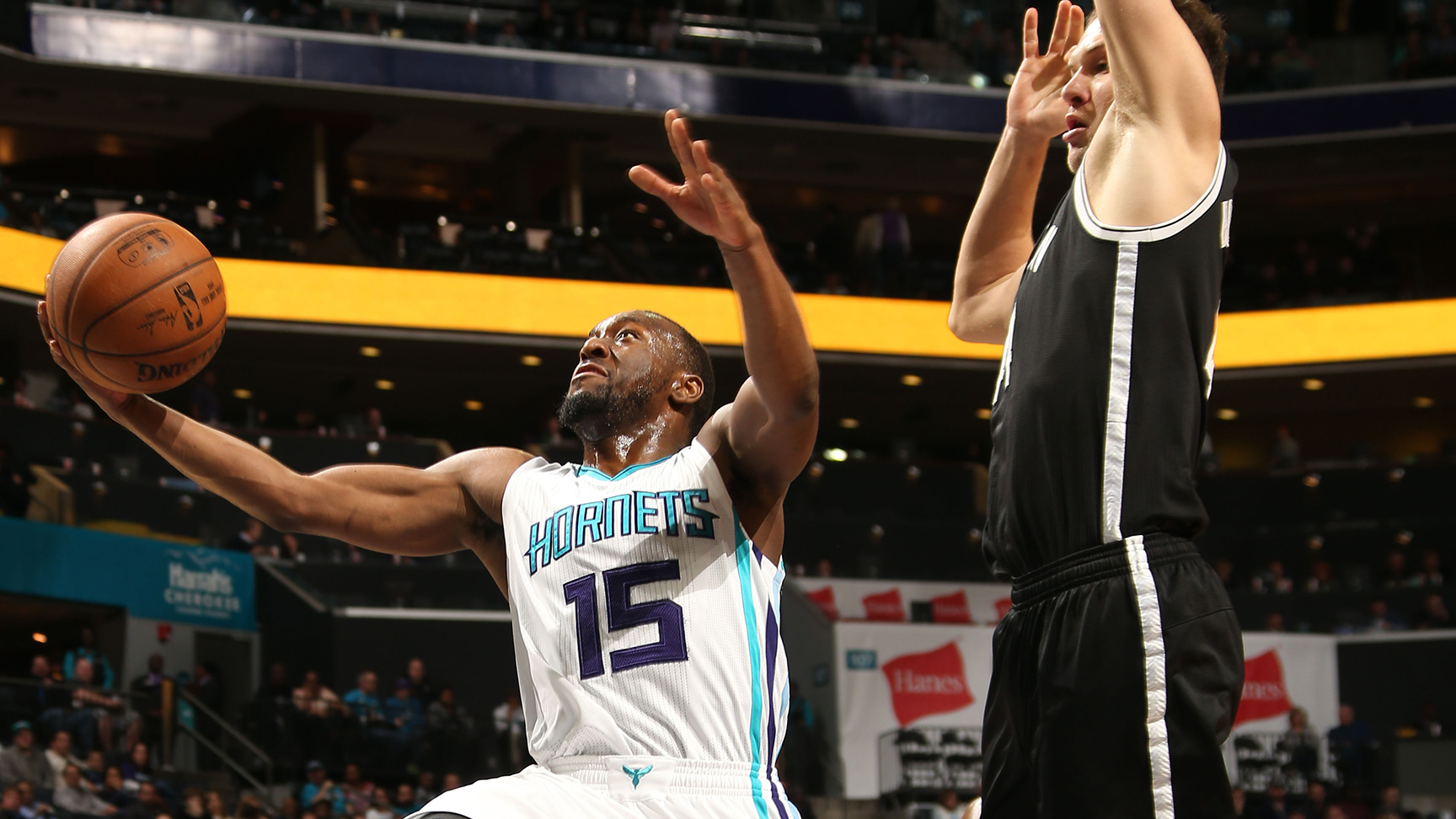 Brett Koremenos: I have a confession to make, Charlotte fans. Every day, when I look at the standings and see the Hornets aren’t in the playoffs, I feel a little like Chris Pine at the Oscars.

It’s nothing against the state of North Carolina, or the city — it’s just that the basketball team is so freakin’ boring. And this isn’t just my opinion. I’ve got the data to back me up. We’ll call it “anti-excitement analytics.”

Fact no. 1: The Hornets dwell in the bottom third in pace. Twenty-first in the league, to be exact. The Nets team they lost to on Wednesday plays even slower, which explains why last night’s game felt like a race between two zombies from The Walking Dead.

Fact no. 2: Charlotte ranks 28th in offensive efficiency, putting it just ahead of a New York team that employs a dude who takes shots like this:

Fact no. 3: The Hornets take the fourth-most midrange shots in the NBA. Never would have guessed that, watching Gerald Henderson score the first 12 of his co-team-high 23 points off jumpers in and around the paint.

Fact no. 4: The Hornets’ opponents take the fourth-most midrange shots in the NBA! A team that both takes and allows a lot of tough, 2-point jumpers?! Where do I sign up?!

Despite being home to likable, semi-entertaining dudes like Al Jefferson, MKG, Kemba Walker, and the captain of Team Knucklehead, Lance Stephenson, this Hornets team is on a mission to destroy my playoff basketball enjoyment. And I thank the Nets for foiling their plan for at least one night.

‘NBA After Dark’ Podcast: Cavs, Mavs, and the Return of Dwight Howard