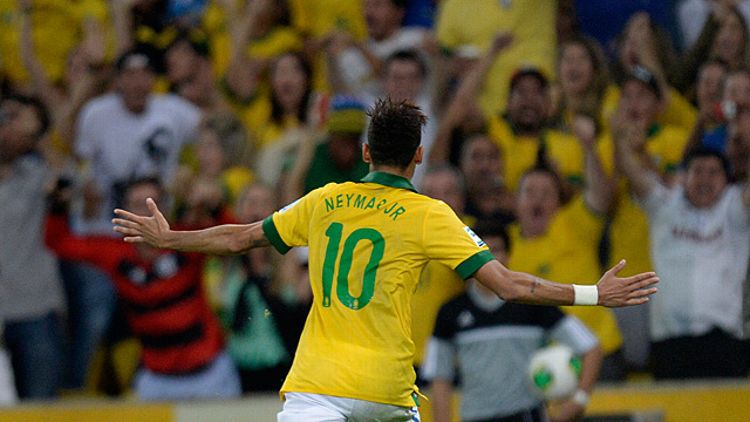 Some takeaways from Brazil’s 3-0 demolition of Spain in the Confederations Cup final:

Passing Torches Back and Forth

Over the last five years, Spain has captured the football world’s imagination, playing the sport about as well as it can be played, and winning the trophies to prove it. Forget the last five years; just take recent history. Going into Sunday’s Confederations Cup final in Rio, Spain hadn’t lost a competitive match since a 2010 World Cup clash with Switzerland, and it was unbeaten, in all competitions, in its last 26 matches (including friendlies).

Perhaps no national team has produced so much fawning from pundits, so many gasps from fans, so many slow rounds of applause from neutrals, and so much face-palming from opponents since … well, since Brazil, specifically the Brazil of 1970.

You could make various arguments about the Netherlands, France, and Argentina, and they are all good arguments to make, I’m sure. But no two nations conjure more romantic feelings about football for me than Spain and Brazil. To see these two countries meet in a Cup final (something that has, shockingly, never happened before), even one that is considered by some to be a glorified friendly, felt almost mythological in its significance. Sure, in 10 years, nobody is going to talk about “that incredible Confederations Cup in 2013,” but if you don’t think it mattered to the people in the Maracana or the players on the field, you’re crazy.

I don’t think this was the end of Spain, nor do I think this was the beginning of a Brazil renaissance. Those are pretty foolish ways to think about football. But there was something about the match that felt like more than the sum of its parts, like there was some kind of dialogue happening between two of the most influential and important post-WWII footballing cultures. And for the first time in a long time, someone had a dialogue — or better yet, an argument — with Spain that wasn’t one-sided.

I am the least original person in the Western world for thinking Brazil was going to win the match after this rousing version of the “Hino Nacional Brasileiro.” Given the protests taking place outside of the stadium before the match (and during the entire tournament, for that matter), and considering how the 2014 World Cup is one of the many things Brazilians are protesting, the sight of 11 Brazilian footballers singing their hearts out with about 70,000 of their fans and countrymen was pretty rousing.

"We love soccer. We hate FIFA," read 1 banner in protest near the Maracanca earlier pic.twitter.com/LuZykukGsJ

Outside of the stadium, protesters clashed with police and were reportedly attacked with tear gas and rubber bullets. Inside, at least for a few hours, there was one Brazil. Modern football is broken and full of greed, and it’s increasingly becoming disconnected from the very people it has built its popularity on. Perhaps there’s no better example of that disconnection than the shady largesse of international tournaments, specifically the World Cup.

That’s all true, and between now and next summer, there will be fierce debate about whether Brazil should have spent the money it has allotted for the World Cup more wisely.

But sometimes, there are moments like the one above.

I have probably not watched enough Neymar, to be completely honest. I’ve caught him in some Copa America games, some Brazil friendlies, and the odd Santos match televised here in the States. Like every other FIFA-playing know-it-all, I have enjoyed his work on YouTube. But as many an Arsenal fan who has watched the highlights of a 5-year-old defensive midfielder titled “BABY MAKELELE” can tell you, sometimes the ’Tube lies.

Well, I certainly didn’t know he could do that. First of all, the obvious: He puts that shot where no keeper could have stopped it; upper deck, in the corner. Then there’s the stuff I didn’t know he could do, the aspects of his game I didn’t know he had: the sense of awareness to drag himself back onside while Oscar waited for a passing lane, the feel for the momentum of the Spanish defense, when to square the ball to Oscar in the first place. Time and time again during this match, Neymar displayed a scary sense of timing and field vision. Watch his dummy move on this final Brazil goal from Fred:

So, how does a human being know how to do that?

The Confederations Cup has been Neymar’s coming-out party, a sneak preview of what the wider football-watching world is in store for when the 21-year-old attacker joins Barcelona in La Liga this season. He still has aspects of his game that a nit-picker might nit-pick; he dives, he doesn’t track back. And then there’s the stuff you love: the pace across 10 yards of ground, the telekinetic touch with the ball, his ability to run on to long-range passes while getting beyond, or behind, defenders. That last attribute is something Barcelona has lacked for a while (the way Neymar stretches defenses reminds me a bit of peak David Villa, but Barca hasn’t bothered exploring that recently). The prospect of watching the Brazilian line up on the opposite flank from Lionel Messi is almost too good to be true. It’s the sports version of The Wolf of Wall Street trailer. €30 million seems like a bargain, doesn’t it?

One of my favorite football quotes is from Uruguay’s Alcides Ghiggia, scorer of the winning goal against Brazil in the 1950 World Cup final: “Down through its history, only three people have managed to silence the Maracana: the Pope, Frank Sinatra, and me.” Given the stage being set for him next summer, Neymar might join that list.

Taken to the Limit

Ian Darke mentioned during the ESPN broadcast that Xavi might be suffering from some muscle fatigue. Uh, yeah. Since 2008-09, the Barcelona midfielder has played more than 300 times for club and country. Spain played a 120-minute match against Italy on Thursday, capped by a penalty shootout. Xavi and the rest of the core of this team have been playing almost nonstop for more than half a decade. These guys are tired.

The question is, are the players tired or is it the style of play that needs a rest? Spain’s commitment to its passing and possession system, known as tiki-taka, is admirable. The thing about playing the way Spain plays is it requires elite technical players with a high level of fitness. The latter was obviously lacking in the match; Xavi, Juan Mata, Andres Iniesta, and the sub David Villa all seemed like they were playing at about 70 percent during the final, and several other players (most notably Cesc Fabregas) have been battling injuries throughout the tournament. That’s what happens when you play through preseason, domestic leagues, domestic Cups, friendlies, European competitions, and whatever else. You get burned out.

Against Brazil, Spain couldn’t hold the ball, it couldn’t win the ball back, and it couldn’t get past the four pillars in the middle of the Brazilian defense (midfielders Paulinho and Luiz Gustavo, and defenders David Luiz and Thiago Silva). For the first time in a long time, Spain looked small and a little bit slow.

Did Spain need a plan B? Is it time for another striking option besides Fernando Torres and Villa? (Torres won Golden Boot, but a bunch of those goals came against Tahiti.) Should Roberto Soldado be starting? Should some of the young lions from the heralded U-21 squad, like Thiago Alcantara, be called up? Can Fernando Llorente live? Should Spain play a double pivot with Sergio Busquets and Javi Martinez to toughen up its midfield? Or will that make it more like every other team running a 4-2-3-1?

Those are all questions for Vicente Del Bosque to answer during the next 12 months. After the match, Torres took a pretty defiant tone: “This team doesn’t need a wake-up call, nor do we need a defeat to regain our motivation. … We didn’t and don’t have to pass any test. We’re world champions and two-time European champions, and have achieved something that no other team has ever done: won three major tournaments in a row. Next year we’re coming over here to make it four.” OK then.

It’s a really interesting time for Fabregas, who spent a lot of his time in Brazil responding to rumors linking him with a transfer out of Barcelona and back to the Premier League. He had a hard time getting on the field for Spain; he was nagged by injuries, though there have been suggestions that there’s more to his absence. With Neymar’s arrival and the emergence of Alcantara (hat trick in the U-21 final), along with the usual playing-time roadblock that is Iniesta, that move back to Arsenal, or on to Manchester United, might make more sense. … Tottenham better hope the ink is dry on that Paulinho transfer. There were stretches where he blanked Xavi, and the chip he put on Iker Casillas in the 12th minute was hilarious. … Given the presence of Neymar and Busquets on the same field, I didn’t think it was an overly dive-y match. … I loved the celebrations with the Brazilian players jumping over the hoardings to get mobbed by fans in the stands. … I can’t believe Jo still exists. … I really want Fred to become a thing.

Can see myself repeating the anecdote about Fred arriving 7 days late back from Xmas break in white stetson at Lyon at least once this week.

About Last Weekend: Uh-oh … the Buccos!