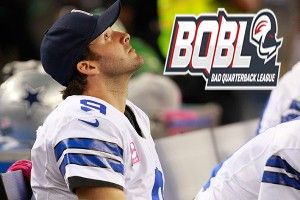 Mark Sanchez draws “Tebow” chants from the MetLife Stadium crowd, Brandon Weeden TAINTs a masterpiece, Ryan Pickspatrick more than lives up to his name. Yet none, not one, of these atrocious performances even broke the BQBL top three. This week was Tony Romo’s. Romo was … he was just … I don’t even know where to start. He fucking sucked.

Yes, Antonio, you did too much, too much. Too much fumbling, too much interceptioning, and too much getting bencheding. Well, too much for Cowboys fans, but just enough for anyone who started the Cowboys in the BQBL. Look, there will be plenty of time to pick apart how Tony got picked apart, but let’s look on the bright side for a second. Romo was 31-for-43, had 307 yards, and … well … sure, he threw a few interceptions, but they weren’t his fault. It would be so easy to just look at “five interceptions” in a vacuum and deduce that Romo had a terrible night. Good thing we have the Quarterback Apologist to review the film:

Antonio Ramiro Romo’s First Interception of the Evening: Antonio started off his interceptioning with the easiest TAINT that Charles Tillman has ever TAINTed.
Quarterback Apologist’s Take: “It was Dez Bryant’s fault. Romo clearly signaled for a hot read and Dez didn’t break off his route. 100 percent Bryant’s fault.”

Antonio Ramiro Romo’s Second Interception of the Evening: This one bounced high off Romo’s favorite new target, Kevin Ogletree, and did that thing where the football just floats in the air for what seems like half an hour before it inevitably gets intercepted.
Quarterback Apologist’s Take: “Pass was right on the money. They should start giving tipped interceptions a different name and stat. They will now be known as Just the Tip Picks.”

Antonio Ramiro Romo’s Third Interception of the Evening: OK, this one was weird. Getting flushed out of the pocket, Tony Tone tried to (a) switch the ball from his right to left hand, (b) shovel pass it to Jason Witten, (c) turn over the ball because he started himself in his BQBL game this week. No matter what, it ended up in the hands of Bears linebacker Lance Briggs.
Quarterback Apologist’s Take: “Look, that was a fumble, not an interception. Get your facts straight.”

Antonio Ramiro Romo’s Fourth Interception of the Evening: Romo underthrew Miles Austin, and D.J. Moore picked it with ease.
Quarterback Apologist’s Take: “We can’t be sure that Austin ran the right route there. Who knows? We weren’t in the huddle. Maybe Austin was supposed to run a 21-yard out? Stranger things have happened.”

Antonio Ramiro Romo’s Fifth Interception of the Evening: Major Wright got his second pick of the evening when Romo again grossly underthrew his receiver.
Quarterback Apologist’s Take: “I got nuthin’.”

After Romo’s fifth pick, Jason Garrett didn’t want him to make it a six-pack, so he sat Antonio in the fourth quarter. I swear I saw Kyle Orton go 9-for-10, throw for 89 yards and a touchdown, and make a case to be the starting QB. That may have happened, or someone may have slipped me peyote. At the very least, one of those things happened.

Titans (Matt Hasselbeck and Jake Locker), 73 points: This was truly a team effort. Rookie Jake Locker got the party started with two impressive three-and-outs, during which he didn’t even complete a pass. Locker then succumbed to an injury, which paved the way for BQBL veteran Matt Hasselbeck to step in and display some of the signature terriblocity that was enjoyed in limited action last year.

But it didn’t happen. Hasselbeck lead the Titans on a touchdown drive, and as the two teams headed into the tunnel at halftime, the Titans were down only seven points and were set to receive the kickoff after the break. Right then, there was a part of you that said to yourself, “You know what? There is a good chance that Matt Hasselbeck leads this team to a come-from-behind victory. Maybe he isn’t as bad as I remember him being.” And then the other part of you — ya know, the rational part — said to yourself, “You know what? There is a better chance that he throws three picks and is then decapitated by J.J. Watt.”

Hasselbeck started his inevitable ineptitude with a nice TAINT tipped by Titan Tailor Thompson but ultimately taken by the Texans. You know I always like my quarterbacks to make an effort to take down TAINTing defenders. Hasselbeck made no such attempt. It was only a couple possessions later that Matty H. found himself again ushering a Texan defender into the end zone, ushering the Texans to 4-0, and ushering himself onto the BQBL summer jam screen. I would never wish harm on anyone (totally not true), but I wouldn’t mind if Locker were out for another week or two so we might soak in at least one more Matt Hasselbeck BQBL week. Forget hurry-up, West Coast, and the Wildcat, Hasselbeck really shines in the BQBL system. It’s his most natural fit.

Seahawks (Russell Wilson), 53 points: Headed into this week, Russell Wilson had not thrown an interception in the previous two games, had led the Seahawks to a 2-1 record, and was kind of feeling himself. That all ended in St. Louis. I know that I just did the whole quarterback apologist bit, but the interceptions weren’t really all his fault. The first one was the rare complete-pass/fumble/interception/did-he-do-that-on-purpose combination. On the second, he was hit while he released the ball, and on the third, his receiver slipped. Still, ol’ Rusty did plenty himself to earn his 53 BQBL points. He didn’t just go 17-for-25; his 18 incompletions did not inspire confidence. Matter of fact, whatever the opposite of confidence is, he inspired that.

Jets (Mark Sanchez and Tim Tebow), 47 points: Rex Ryan on Mark Sanchez, “I just know in my heart that this is not the time [for a quarterback change]. I think Tim [Tebow] is an outstanding player. I think Mark is. Right now, I think Mark gives us our best opportunity to win. And I will always do what’s in the best interests of this team, and that interest is what gives us the best chance to win.”

Objective facts on Mark Sanchez: He is last in completion percentage. He completes fewer than half of his attempts THAT ARE LESS THAN FIVE YARDS. He is not our Lord and Savior.

Chiefs (Matt Cassel), 44 points: “Even after he had those turnovers, he came back and drove the team down the field, so we think he’s capable,” Romeo Crennel said about Matt Cassel. Now imagine that your boss said that about you: “You know, sure, he totally messed every single task that I gave him to do today, but he got ONE right, so, ya know, he CAN accomplish things. He has shown that ability.” Are there points for the most passive-aggressive endorsement in the history of the quarterback position? No? There should be.

Browns (Brandon Weeden), 34 points: Did Weeden really get the ball on his own 10-yard line, against the Ravens, down a touchdown, with a minute and five seconds left, on the road, drive the thing 72 yards, and get a shot at the end zone? No, that didn’t happen, right? I must be misremembering. It was last Thursday after all.

OK, we’ve gotten to that point where the next few guys actually had decent games. Make sure to check back next week. We have Yo Gabba Gabbert against the Bears defense in the late game on Sunday, and Mark Sanchez against the Texans on Monday night. Should make for a big BQBL week.

Draw It Up: The Latest Wrinkles in West Virginia's Explosive Offense