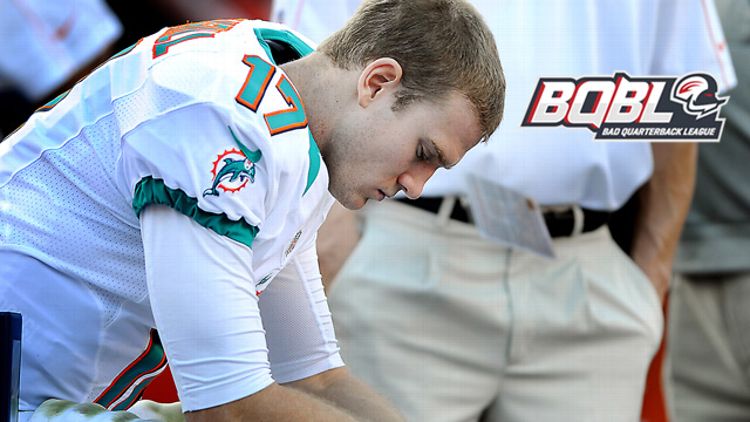 There is much to celebrate this week in atrocious quarterbacking: Yo Gabba Gabbert was benched, Nick Foles did many Nick Folesian things, Mark Sanchez continued his campaign to ensure that Tim Tebow is front-page news, and Eli may have officially regressed into the fourth-best football player at next week’s Manning Thanksgiving table. But none of these triumphantly terrible turns behind center could top the work of Ryan Tannehill, who was nice enough to remind everyone, with this week’s performance, how he earned the name TAINTehill. I thought that was nice of him. So did the Titans.

Dolphins (Ryan Tannehill), 67 points: When TAINTehill took the field this week, the announcers set the scene: “He has really limited his mistakes — no interceptions for Tannehill over his last four games, a completion percentage of just under 59 percent. Tannehill, last week, was good …” At that moment on Sunday afternoon, with Miami at home, facing a Titans defense that allowed an average of 34.2 points a game through its first nine games, there was absolutely no reason to believe that at the end of the game, Lauren Tannehill’s husband would have as many interceptions as the Dolphins had points. You know that old saying about how “it isn’t how a man reacts when he is on top that defines him, but rather how he reacts when he is at his lowest”? No? Well, it probably doesn’t go exactly like that. But with vigorous and passionate tackle attempts after each of his three interceptions, Lauren Tannehill’s husband reflected a very strong character and pleased all at BQBL headquarters, where, oddly, we care very much about those things. In honor of TAINTehill’s tackles, we will now review his Sunday by contrasting his turnovers with his takedowns, each worthy of celebration:

Pick No. 1: The TAINT
The Pass Attempt: Right read, right receiver, wrong throw. On a third-and-1, Lauren Tannehill’s husband sees Charles Clay open in the flat, but he doesn’t see Akeem Ayers lurking in the passing lane just beyond the linemen. Ayers tips it to Colin McCarthy, who TAINTs it to the house.
Grade: D+

The Tackle Attempt: Already a veteran TAINTer, Lauren Tannehill’s husband immediately takes a conservative angle to try to keep McCarthy from the end zone. However, McCarthy is being escorted to the end zone by a half ton of Titans defensive linemen that would like nothing more than a free shot at TAINTehill. Sensing his time is about to run out, around the 10-yard line, Ryan makes a hard line toward the ball carrier and is promptly deposited on his backside.
Grade: B-

Pick No. 2: Hoping for the best
The Pass Attempt: Again on third-and-1, the Dolphins go to the air, and again, the ball goes to Akeem Ayers. Dolphins tight end Anthony Fasano runs a hitch route, at the end of which he attempts to create some separation by pushing Ayers out of the passing lane. Ayers does not comply. As a matter of fact, I am not even sure that Ayers notices.
Grade: D-

The Tackle Attempt: To be fair, Ry Ry didn’t have much of a chance to tackle Ayers (although that would have been a delight to watch), but he did make a great effort after the play on behalf of his team. Immediately after Ayers was ruled down, TAINTehill ran up to one of the referees and did a whole pointing, screaming, complaining routine. I can’t make out the audio that well, but I swear I heard him say, “Did you see the way that he didn’t even move when my guy illegally push him out of the way? There has to be something in the rule book against that, right? Illegal use of cyborg strength or something? Excessive emasculating of receiver? Nothing?”
Grade: C

Pick No. 3: The TAINT-saving tackle!
The Pass Attempt: Titans linebacker Zach Brown lines up at the line of scrimmage and shows blitz. At the snap of the ball, he takes one step in and then immediately retreats in front of Jabar Gaffney, who’s running a slant. Lauren Tannehill’s husband saw him line up to blitz; Lauren Tannehill’s husband does not see him in front of Gaffney.
Grade: F

The Tackle Attempt: This was Tannehill’s play of the day. After Brown makes the interception, he heads toward the sideline and thinks he has an easy jog to the end zone. Zach Brown forgets about Lauren Tannelhill’s husband’s competitive fire. Tannehill takes an angle that avoids all would-be blockers and allows him to track down Brown 40 yards downfield for a TAINT-saving tackle. I don’t know if there is another quarterback in the league who makes this play. For real. It saved a second TAINT of the day, and it saved Tannehill’s reputation — but it couldn’t save the Dolphins, who were already down 34-3.
Grade: A-

Don’t miss this Thursday’s TAINTehill-Pickspatrick matchup. Should be a lot of quarterbacks turned tacklers.

Jaguars (Blaine Gabbert), 59 points: Was Yo Gabba Gabbert replaced in favor of Chad Henne because he was injured or because he was throwing perfect touchdown passes to the other team? See, the BQBL is like life — sometimes you have to make tough decisions. Here at BQBL headquarters, we believe that Yo Gabba was replaced in part because he was injured, but mainly because he was Yo Gabba Gabbert. The fact is that he could have continued to play. He even went so far as to join the team in the huddle a couple plays after he was taken out. This may have been done without the coach’s permission, though, because he never took a snap. The fact is, no matter who is under center for the Jaguars, he is going to be equally ineffective. Sure, the Jags threw for 330 yards, but they never impressed. The only passes they completed were either dump-offs to guys who made someone miss or the result of a defender jumping on a route and missing. Somehow both Henne and Yo Gabba failed their way into more than 300 yards passing. It was the football equivalent of that dude from Counting Crows dating every hot actress in Hollywood. To be honest, this was a Thursday-night game between the Colts and the Jags on the NFL Network, so I don’t even have proof that it occurred. I know no one that watched this game, no one talked to me about this game, and there were no people in the stadium as far as I can tell from the highlights. You know how you are like 99 percent sure the moon landing happened but could totally see a scenario in which it didn’t and all you really saw was doctored film? That is how I feel about this football contest.

Philadelphia Eagles (Mike Vick/Nick Foles), 50 points: Nick Foles, two things: 1. Don’t take this loss that hard — that mess wasn’t your fault; 2. what the hell is up with your hair? That mess is totally your fault. Let’s start with the game: Yes, Nick Foles FARTed and TAINTed. Yes, this is funny because “fart” and “taint” are dirty words. But let’s not be too quick to anoint Foles as the new BQBL poster boy quite yet. There is more to the story. The TAINT was a decent pass that bounced off his receiver and a defender and then up into the arms of Cowboys cornerback Brandon Carr, who TAINTed it almost as an afterthought. The FART, well, that was just a rookie quarterback running around his own goal line with the ball at his side like he wasn’t being pursued by fast, bloodthirsty man-crushers who land on people for a living. While that was not his proudest moment, Foles did show some glimpses of competency that will give Eagles fans a little hope. Sure, Foles’s 44-yard touchdown pass to Jeremy Maclin flew through the air more like a punt than a pass, but a touchdown is a touchdown. What Eagles fans should really be worried about is hair.

Google image search “Nick Foles hair” and notice the fifth result. It is Tom Petty circa “Runnin’ Down a Dream.” Why is it Tom Petty circa “Runnin’ Down a Dream”? Because someone on the Internet was nice enough to point out that the two have the same hairstyle. Were I an Eagles fan, this would concern me very much. When my quarterback jumps into a pool, is submerged in water, and then resurfaces, I do not want him to have to do that hair flip thing that the swimsuit models do. I want my quarterback to emerge from water undeterred by follicular water drips. Someone get this man to a barbershop before Sunday’s game.

Texans (Matt Schaub), 45 points: No one can avoid throwing interceptions to the Bears defense. No one. The Texans turned over the ball twice in the first half, and on Sunday, Matt Schaub threw for only 95 more yards than you did. Oh yeah, did I mention the Texans won? Welcome to the Jason Campbell era, Bears fans.

1. Whoever is quarterbacking for the 49ers will throw two TAINTs.
2. Whoever starts for the Jags will be benched.
3. Brandon Weeden will finally have the BQBL week that we all know Brandon Weeden has in him.