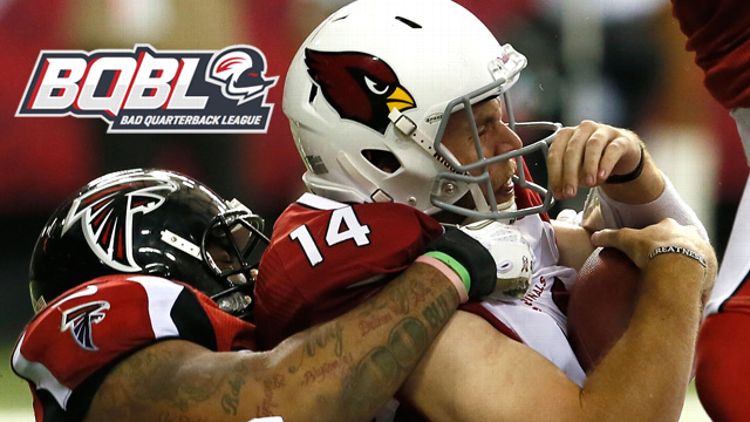 No one is safe from the BQBL Summer Jam Screen. Atop the BQBL leader board this week are Matt Ryan, Andrew Luck, Peyton Manning, and Matt Stafford. While these “elite” quarterbacks (whatever that means) had surprisingly atrocious performances, there was nothing surprising about Ryan Lindley’s debut as an NFL quarterback. He was all kinds of entertaining in that “Wow, this is what it would look like if you pulled a dude from the stands and put him under center” type of way. Oh yeah, one more thing: He almost beat the Falcons. Let’s review the carnage from Atlanta’s TAINTiest and FARTiest of football contests (I swear that will be the only FART joke. I swear).

Cardinals (Lindley and Skelton), 100 points: Imagine you are John Skelton, starting quarterback for the Arizona Cardinals, and you’re in Atlanta facing off against Matt Ryan and the 8-1 Falcons. The Falcons start with the ball, and on the first play from scrimmage Matty Ice throws an interception. You turn that into a touchdown. The Falcons then go three-and-out, and you turn that into a field goal. After a couple more first-quarter picks from Matty Ice (yes, he had three), the quarter runs out, you are up 13-3 against the 8-1 Falcons, and you’re starting to say, “Hey, Skelly (he calls himself Skelly), you can do this!” Then head coach Ken Whisenhunt says, “No, you can’t do this,” and puts in Ryan Lindley. Ken Whisenhunt just decided that instead of John Skelton, he was going to play a quarterback who has thrown as many NFL passes as you have, and he did this with a 10-point lead.

To be fair, at the time Skelton was 2-for-7 with six yards passing for the day, but Lindley was 0-for-0 with 0 yards passing FOR HIS CAREER. OK, stop imagining that you are John Skelton and get back to being yourself. Imagine if this happened to you. Imagine if your boss came to the office and said, “You know what, dude, even though this bro Steve has no real-world experience, he is replacing you. Can you clean out your desk?” How do you not punch Steve in the face? They showed a shot of Skelton on the sideline, and I felt really bad for him. If you have John Skelton’s phone number, please send him a text that says, “Look, man, on the bright side you snapped your 12-game interception streak.” Actually, don’t.

Colts (Andrew Luck), 70 points: Have you ever played pick-up basketball against a big man that was over 40? There is this “old-man strength” thing they possess that makes it impossible to move them out of the paint or contest their shots. It’s like in all of their years on the planet they have grown roots that don’t allow mere mortals to move them. These dudes always work over young guys with a barrage of hook shots, rebounds, and veteran sneaky moves. That is what Tom Brady The Cyborg With a Supermodel did to Andrew Luck. The game started well enough for Luck as he moved the Colts down the field to start the game with a TD. Then Brady answered. Then Luck hit T.Y. Hilton for another TD. Then Julian Edelman scored on a reverse. Then it happened. The brand-new Patriots conerback, fresh off the suspension du jour — for taking Adderall — TAINTed Mr. Luck. After a second TAINT, it was clear that Luck was no match for the “old-man strength” of Tom Brady The Cyborg With a Supermodel and the Patriots. Luck’s day made even the Patriots secondary look effective. Basically, this game is the Patriots secondary’s Facebook photo.

Chiefs (Dalton and Quinn), 56 points: When you bench Matt Cassel after he goes 8-for-16 with 93 yards and insert Brady Quinn, who goes 9-for-14 with 95 yards, isn’t it time to start thinking out of the box? You know that whole Einstein definition-of-insanity quote: “Doing the same thing over and over again and expecting different results.”

Methinks Mr. Crennel could learn a lot from the lessons of Einstein and change up his approach to the quarterbacking position. More from Albert: “A person who never made a mistake never tried anything new.” Maybe put a lineman back there? Maybe a running back? Run a fan contest? There is not enough outside-the-box thinking going on at Chiefs headquarters. At the end of the day, “No problem can be solved from the same level of consciousness that created it.”

Falcons (Ryan), 53 points: Five interceptions, no touchdowns, and almost losing to the Cardinals, who played Ryan Lindley at quarterback. Were I a Falcons fan, I wouldn’t book a flight to New Orleans just yet.

Lions (Stafford), 52 points: Ever since someone pointed out to me that Matt Stafford looks like Knight from The Challenge, I can’t take him seriously as a quarterback.

Broncos (Manning), 40 points: Oh hello, TAINTon Manning. To be fair to the BQBL’s best SNL host, he had quite a game this week and has been on a roll. You know how it works. Once Quick Slants gets to guys that had good games, it’s time for next week’s predictions:

Clairvoyant Jacoby’s picks for next week’s leader board:
1. I am going on record to predict that Eli’s arm hasn’t been miraculously fixed by the bye week
2. Sanchize will crumble against Tom Brady The Cyborg With a Supermodel’s Old-Man Strength.
3. Chad Henne is still Chad Henne, right?