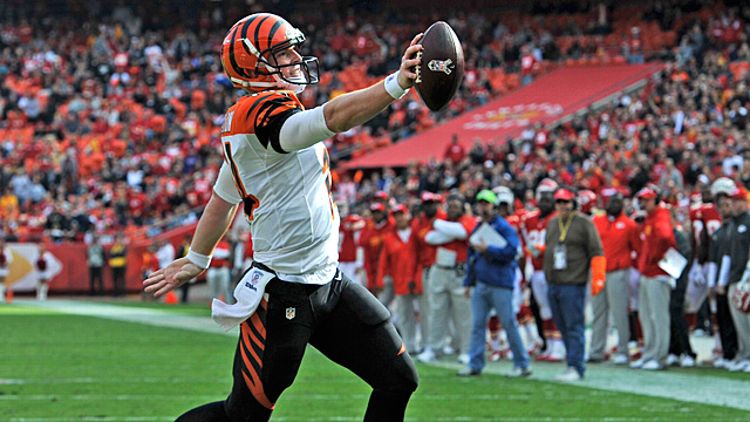 The Bengals beat the Chiefs 28-6 on Sunday. That’s two in a row. E-mail from my dad, Sunday evening: “You have altered Bengals reality.” No further message.

There are probably other explanations, but I accept that one. By observing the Bengals’ situation in order to mock it, I’ve changed it. Basic quantum mechanics at work.

We’ll come back to this in a minute. Or maybe we won’t. Instead of going to the bar this weekend, I watch football at Werner Heisenberg’s house. Werner Heisenberg promises to put the Bengals game on one of the TVs if it gets close, but it never does. I follow the Bengals’ neat dismantling of the Chiefs on my phone while ping-ponging my eyes back and forth between Packers-Lions and Jets-Rams and eating everything in a bag of Jack Link’s that is not explicitly labeled DO NOT EAT. The life of kings.

The Bengals win and increasingly I don’t know who I am anymore. Afterward I shoot free throws in the yard and I’m almost relieved to learn that I still suck at basketball.

My sister breaks up with somebody — sad story, her story, details largely immaterial to this story — and I spend the Friday before this Sunday moving her out of her place and into our attic.

I moved my family and everything we owned from Brooklyn to Los Angeles in April, and in the course of this process I became a moving genius. I’m pretty sure I’m one of America’s greatest movers under 40, non-professional division. There’s no room for sentimentality or doubt the way I do it. It’s a load-out. Simple. You survive them the same way, by reducing them to logistics, making them about spatial relationships (objects in a box, boxes in a van) and problem-solving and power-through efficiency. Moving-game Winston Wolf. Moving-game RoboCop. Moving-game Neal McCauley. Go, go now.

“Rock music,” Pere Ubu’s David Thomas once said, “is mostly about moving big black boxes from one side of town to the other in the back of your car.”

We secure the U-Haul. We hit the box store in Atwater Village, give the job specs to the box-store guy. Get these boxes. Get that tape.

(The box-store guy asks my sister if we need a tape gun for the tape. Except he doesn’t say “Will you be needing a tape gun with which to dispense this tape, Miss?” He says “Do you have a gun?” My sister looks horrified for a second, like Oh, God — whatever this has come to, it hasn’t come to that.)

We have five hours. We’re out of her place in three. I demand laser focus and zero reflection. Call the piano guy, who will charge us by the stair to move the piano because that is how the pricing structure works on piano moves. Split up these records. Paperbacks with the paperbacks. Hardbacks sorted by trim size. You have 20 seconds to comply. What is in these drawers? What is in these shoe boxes? Seriously, what the fuck is in this safe, Liz — sand? What’s left?

We walk away and the building blows up behind us and the heat prickles the backs of our necks but we don’t turn around. Get in the van. Go now.

I’m not telling you this so that you’ll think I’m a good person. At my core, I’m not a good person. I’m selfish and lazy and I get angry when I have to carry heavy things and I suck at being a member of a family other than the one I created. Which, aside from there being no one else to do it, is why I’m doing this. On some level, when we moved to California, to the state where my family lives and the city where my sister lives, I knew I was doing it to put myself in a position where I would at some point be forced by circumstance to do right, where there would be no other thing to do. That’s what’s happening now.

The cliché about this city is that everyone moves in isolation. Human-units vacuum-sealed in their individual electric cars, a municipality of Gary Numans locking out non-programmatic interaction. The flip side of this way of life, though, is that when you’re on foot, people reach out, crossing social boundaries that even a pedestrian city like New York holds sacrosanct. You are called to interaction and frequently to action, because often you’re the only other person around. We live in a desert, and you don’t leave your fellow man hanging when you come upon him in the desert, bereft. I’m going all Paul Haggis here, I should shut up.

One day when we’d been here maybe two weeks, I was walking back from dropping the kid off at day care, mid-morning, the sun on my face already as hot as an iron. At the bottom of a hill this kid on a mini-bike — the kind you build from a kit and ride with your knees in the air, a chainsaw with wheels, horsepowerwise — pulled up alongside me in the street. The kid was 16 but growth-spurt huge. Gangly arms in a tank top, permanent-looking sulk on his face. The engine wasn’t running; he was pushing his bike in beat-up Air Max.

I looked up and down the street. No one else around. He needed me to pull the cord on his engine while he gunned it, to get the bike started. He had to get to his brother’s house, which was at the corner of some street I didn’t recognize and something else, so his brother could drive him to work.

In New York, where you learn to look at anyone in any kind of need like Buffalo Bill with a fake broken arm trying to move a sofa, I’d have waved it off. This is the beginning of an interaction that ends with the kid asking for gas money, cab fare, my wallet, my phone, my life. This is the scene in the movie where you get shot in the head to demonstrate the cruel randomness of existence, I thought, calmly, because I am not a good person. This is a gang initiation. This kid has to waylay and cap a Silver Lake hipster to get his Familias Los Craziest merit badge. Cut to wide shot, the two of us in profile, him popping me in the head with a .38, me looking surprised. Cut to me bleeding out under the palms, homicide detectives lifting a blanket and shaking their heads, Prince’s “Sometimes It Snows in April” playing at my wake, my wife signing copies of a heartbreaking memoir, putting my books in storage, telling my daughter, “He was always so good at packing boxes.”

But I did it. If his bike really wouldn’t start he wouldn’t be able to make much of a getaway. And what else was I going to do, just keep walking? I pulled the cord — 10, 20 times, until the engine turned over. And then at the top of the hill it stalled out again, and I pulled the cord another 20 times or so and finally the engine caught again and the kid buzzed off over the hill, and I forget if he said thanks.

And then on Friday I’m walking out of my sister’s building, heading to 7-Eleven for water and protein bars and a newspaper to wrap the dishes in. From two carports over a guy waves me down. He’s got a pickup truck, some rock-band-backline-looking road cases on wheels.

“Can you give me a hand with something real fast?”

He has a giant electronic keyboard in a cocoon of Bubble Wrap — a Synclavier, like the one Stevie Wonder used to sample the Huxtables’ voices on The Cosby Show — and he needs to put it in this padded plywood coffin in the back of his truck, and he can’t do it alone without crushing his fingers.

I am a good Samaritan. No — I am a GREAT Samaritan. I take one end of the Synclavier and we lower it softly into the crate. Your vintage electronics are secure, sir. Go now, and make an Art of Noise record in which dogs bark the beat.

I will help everyone. All of Los Angeles, if Los Angeles asks. And then maybe I’ll get it back. The ecosystem of street-side assistance: We’re loading in, at my house, around five, as it starts to rain, the night coming down like a blackout curtain, I’m ferrying boxes down the driveway. On the way back to the van I make eye contact with a perambulating hipster — and I mean central casting, with the curly mustache and the suspenders and the Pete Campbell part, like he is on his way from sweeping up a barbershop in 1938 to his night job making artisanal gin-fizzes for the members of Beach House to drink — and the first thing this guy says is, “You need any help?”

I’m writing this in my basement office, a space I now share with everything my sister owns. I’m reading Bengals blogs, looking ahead to this Sunday’s game against the Raiders, a matchup known to scholars of the Joseph Campbell monomyth as the “Atonement With Carson Palmer.” Per the realists at Stripe Hype: “Fans will demand a win, and a loss will awaken the angst in Cincinnati.”

But it doesn’t have to go that way. Maybe we’re not, strictly speaking, good, but maybe we will reduce the challenges presented us to pure logistics. The ball needs to go in the end zone and these boxes need to go across town and the angst can wait.