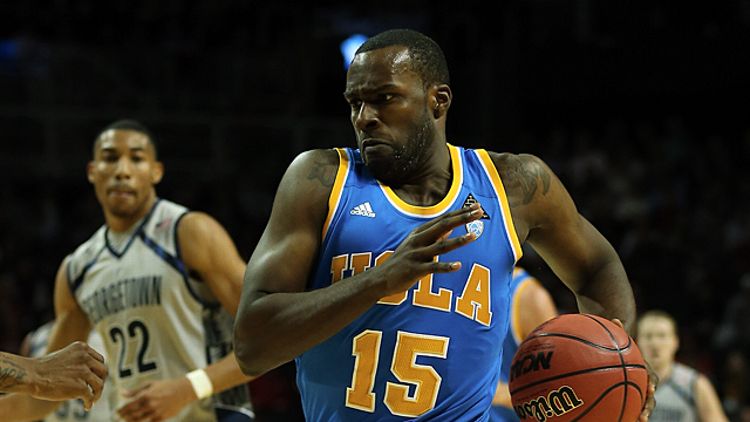 The odyssey* of Shabazz Muhammad has finally reached the part where actual basketball is played. Here’s how his college career started Monday night against Georgetown, after he entered the game at around the 14-minute mark:


(*After a long investigation, Muhammad** was ruled ineligible earlier this month because the NCAA decided longtime family friend Benjamin Lincoln wasn’t close enough, friendship-wise, when he paid for Muhammad’s recruiting visits to Duke and North Carolina. UCLA appealed, and then reached a deal with the NCAA a week later; Muhammad’s family would repay $1,600 to Lincoln and Shabazz would miss 10 percent of the season. That 10 percent was equal to the three games UCLA had already played, so he essentially got off with time served. It’s also worth noting that his punishment was exactly three times less severe than the nine-game ban the NCAA levied on two Indiana freshmen because, no joke, an AAU coach who provided them with legal financial benefits happened to donate $185 to Indiana between 1986 and 1992 and was therefore a “booster.” The main point here, I hope you’ve gathered, is that the NCAA sucks.)

(**I really want to call Shabazz Muhammad by his first name, like Ichiro. It feels like that kind of name, right? I tried to think of other examples of first-name basketball players, and the first thing that came to mind was “Pau.” Then Twitter gave me LeBron, Kobe, Shaq, Magic, Kareem, Hakeem, and Kemba. Yes, I’m an idiot.)

OK, so about Shabazz. He played 25 minutes and finished with 15 points on 5-of-10 shooting, and he’s obviously very athletic and talented and all that. Also, as Chris Ryan pointed out to me on Gchat, he looks like he’s 35. I’m pretty sure I even noticed some gray in his beard.

But it will take a couple more games before we see Shabazz’s true greatness emerge. (The next step comes tonight, when the Bruins take on Georgia, a team that looked stronger than expected while hanging around for 30 minutes with Indiana on Monday night.) He’s still coming back from a shoulder injury, and he’s not quite in game shape yet. For now, I stand by Monday’s claim that Oklahoma State point guard Marcus Smart is the best freshman in the country, though Brandon Ashley is making a great case for himself out in Arizona.

The real story of the night, though, was unranked Georgetown, which upset the no. 11 Bruins, 78-70. Otto Porter came back from a mild concussion suffered earlier this year to light up the stat sheet with 18 points, 11 boards, five assists, five blocks, and three steals, while Markel Starks put up a career-high 23. And while it’s not necessarily a surprise that Georgetown won, it is kind of a shock that they managed to do it by outscoring UCLA. A Hoya win, in my imagination, would look something like this: 61-56, with John Thompson III screaming at his players not to shoot with anything more than five seconds remaining on the shot clock, and tolerant Big East–type officials allowing the Hoyas to rough up UCLA to the point where the Wear twins refused to step inside the 3-point arc.

Instead, Thompson seemed to realize that his team could play reasonably fast and score on UCLA, and could throw some zone looks at them on defense to stop guard penetration and dare the Bruins to beat them inside. For their part, UCLA figured out how to score in the second half, dropping 41 after an inefficient 29 in the first half, and Jordan Adams was a bright spot in the loss. The shooting guard enjoyed less hype than fellow freshmen Shabazz, Kyle Anderson, and Tony Parker (who, as many Twitter followers pointed out, might still be holding his press conference), but who looks like one of the NCAA’s most natural scorers in four games. His lowest point total so far was 21, and he dropped 22 on the Hoyas despite hitting only 2-of-10 from 3. But even Adams couldn’t stop Porter and Starks from keeping Georgetown safely ahead.

If I were a Georgetown fan, I’d be thrilled to see that Thompson has once again pulled off a slight early-season magic act after losing three huge contributors. Last season, after Chris Wright, Austin Freeman, and Julian Vaughn left, he managed to lead an inexperienced team to a 24-9 record with the basketball equivalent of spit and elbow grease, and now he’s got the same task ahead of him after losing Hollis Thompson, Jason Clark, and Henry Sims. But the discipline is there, and the Porter-Starks combo gave a hint of the talent that’s ready to blossom. Tonight’s game against Indiana should be extremely interesting, especially after the Hoosiers showed vulnerability against Georgia.

If I were a UCLA fan, I’d be worried about three things:

1. The 6-foot-10 Wear twins, Travis and David, are weak to the point of annoyance. They can hit a mid-range jumper, but they absolutely do not belong inside. UNC fans on Twitter last night wouldn’t stop expressing a sort of cruel gratitude that the Wears, who originally came to UNC, had transferred away. It was a hallelujah chorus of powder-blue schadenfreude.

2. If the Wear twins aren’t effective, what’s the answer? Josh Smith isn’t it, and Parker isn’t playing. As of now, UCLA is very vulnerable to big, strong teams. I shudder to think what Arizona will do to them inside the paint.

3. Kyle Anderson, the freshman 6-foot-9 combo guard, is so, so slow. A lot of people are making excuses for him, saying that slow is his style and that he makes it work for him, but I’m not convinced. I don’t think I fully appreciated the speed at which he operates, but watching him, I can’t help but think he’s Harrison Barnes without the shooting ability. It’s still very early, but he definitely gets my vote as the overhyped freshman of the year. We’ll see.

Doubts aside, it’s good to see UCLA playing with top talent again. The ugliness of last season seems to have faded, and the very worst you can say about UCLA coach Ben Howland and the Bruins is that they’re a year or two away from being very, very good.