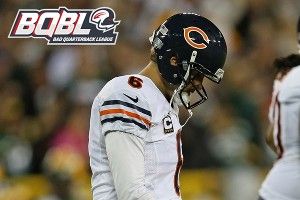 There are two things we learned from last year’s inaugural BQBL season: (1) No matter how respected a guy is around the league, how many Super Bowl rings he has, or how many times he’s hosted SNL, he WILL, at some point, spend a week on the BQBL Summer Jam Screen; (2) Blaine Gabbert sucks. For real, he sucks. But even Yo Gabba Gabbert didn’t bring the level of suckocity that Jay Cutler did this week. He was so bad that his performance is somehow still in the news cycle … and he played on Thursday night.

Bears (Jay Cutler), 78 points: Jay Cutler does not believe in positive reinforcement. Rumors are flying around the Windy City that Cutler isn’t well liked in the locker room. However, he was absolutely loved by every BQBL owner who started him this week.

Mr. Cavallari was territrocious last Thursday. In case you’ve forgotten just how miserable Mr. Cavallari was, let me get you up to speed. He threw four picks, was sacked seven times, went 11-for-27, only had 126 yards passing, and finished with a 4.7 QBR. Look, I have no idea what QBR is, but I know that when the only two quarterbacks who have had a lower QBR than you this season are named Brandon Weeden and Ryan Tannehill, you didn’t play well. And then there was Cutler Castigategate.

In the second quarter, Mr. Cavallari was unceremoniously body-slammed by Clay Matthews and his beautiful hair. En route to Cutler, Matthews passed Bears left tackle J’Marcus Webb. He did not stop, nor did he collect $200. A play later, as the punt team ran onto the field, Mr. Cavallari gave J’Marcus an earful and even mixed in a little bumpy/pushy move that would have made Billy Martin proud. Much was made of this castigation, thus launching Cutler Castigategate. First to chime in was Cutler, who dropped the insta-classic, “I care about this. This isn’t just a hobby for me. I’m not doing this for my health. I’m trying to win football games. I’m trying to get first downs. When we’re not doing the little things or things the right way consistently, I’m going to say something.”

Jaguars (Blaine Gabbert, Some Other Dude), 70 points: Because he was featured in about 14 of the 18 BQBL write-ups last season, I was keeping an eye on the Jaguars and especially Yo Gabba Gabbert in Week 1. The announcers has the audacity to talk about the “New Blaine Gabbert” and how he had matured and grown into a smarter, better quarterback in the offseason. Fools. It only took five quarters of professional football for the new Blaine Gabbert to find himself in the same spot the old Blaine Gabbert did … benched for a backup.

Well, this is actually one of those controversial calls that we have to make at BQBL headquarters. When I went back to review the tape of his benching (I watch film and stuff like a real big-boy football writer), there weren’t any noticeable injuries leading up to the benching, but the announcer did say he was “shaken up,” and NFL.com says, “Gabbert out for game with leg injury.” But, c’mon, when he left the game he was 7-for-19, had 53 yards passing, and was about to cry.

My favorite part of going back and watching the film was the announcers’ description of his last pass attempt. Here it is, presented without commentary, because the natural reaction to Yo Gabba’s play is better than any reflection after the fact could ever be:

Play-by-Play Guy: “Gabbert again incomplete. It was intended for tight end Marcedes Lewis, and you can hear the boos from this crowd, upset with what they have seen. Although I think they have been compassionate.”

Oh wait, I lied. There’s totally more commentary. The best part to reviewing this horrible performance was that even the touchdown pass was horrible. It was a flailing, scrambling, terrified, back-footed throw that was five yards behind its target. This guy can fail his way into the end zone. Welcome back, Blaine Gabbert. We missed you last week.

Broncos (Peyton Manning), 37 points: Hey, thanks for joining us, Peyton. Welcome to your first BQBL appearance. What is the BQBL? Oh, you must have missed it last year while you were having a few dozen neck surgeries. It stands for “Bad Quarterback League,” and it is a fantasy jammy where you root for quarterbacks to shit the bed, much like you did last night in Atlanta. You see, you get points for throwing interceptions. You were really good at throwing interceptions last night. Let’s run back the BQBL favorite “inner monologue” gimmick for Peyton’s big night in ATL:

Interception No. 1
Title: The Warm-up Pick
When: 14:24 left in the first
Inner Monologue: “OK, one incompletion and one run for -2 yards so far in the game. Let’s go big right here. Oh, there is that no. 84 guy, what is his name again? DJ Tanner? Anyway, he’s wide open; let me just throw this to … oh man, didn’t see that safety there.”

Interception No. 2
Title: The Still-Warming-Up Pick
When: 11:58 left in the first
Inner Monologue: “All right, shake off that last interception. You’ve got work to do. Let’s go with a play-action pass here. OK, play action went well … hmmm, no one is open. Why don’t I just work it into that triple coverage there just like the ol’ days in Indy … That one came out a bit wobbly and about eight yards short. These are not like the old days in Indy.”

Interception No. 3
Title: “The Just-Starting-to-Get-Warm Pick”
When: 7:08 left in the first
Inner Monologue: “All right, two possessions, two picks. No chance I throw a third in a row, right? Impossible. Since the odds are in my favor, why don’t I just go deep to that Stokely dude? Oops. Went a little too deep to that Stokeley dude. I hope I don’t have to tackle him.”

Manning turned his night around and started throwing to the guys wearing the same outfit he was, but it was too little, too late. If only the Broncos had some sort of mysterious, magic, ultra-religious, über-intense quarterback who could lead his team to victory against all odds and had the throwing motion of your mom using her left hand. If only …

Jets (Mark Sanchez and Tim Tebow), 27 points: When Tim Tebow enters the game and does his little run-option thing, does Sanchez root for him to do well? Of course he does on the surface, but, like, deep down inside, where his real feelings are hidden behind a decade of media training and handsomeness? In that dark place in his psyche, he wishes Tim Tebow nothing but the worst. Fact.

Saints (Drew Brees), 26 points: I bet Drew Brees comes to practice on Tuesday, goes straight to the head coach’s office, and says, “Fuck this, I am playing defense, too, next week. This is embarrassing.”

Texans (Matt Schaub), 26 points: What the hell are you doing here, Matt Schaub? Oh, right, BQBL loophole — on the rare occasions that you are playing a team that is starting a quarterback as laughably bad as Blaine Gabbert, you literally don’t have to pass the ball and will rack up some BQBL points. I’m sorry, Mr. Schaub, you really don’t deserve to be here. Is there no justice in the world?

Giants (Eli Manning), 20 points: Eli Manning, how are you so Eli Manningish? Seriously, a fumble, two picks, and a TAINT, but also 510 yards, three touchdowns, and a game-winning drive? That is so damn Eli Manningish. He is easily the best quarterback in the history of the league who also appears during the games dressed as Tinkerbell.

Cardinals (Kevin Kolb), 17 points: OK, you know it is time to close down the column when you get to guys that had good weeks. After this win against the Patriots, there is no doubt left that Kevin Kolb is the greatest quarterback in the league, right? Like, absolutely none? Good. Glad we’re on the same page.