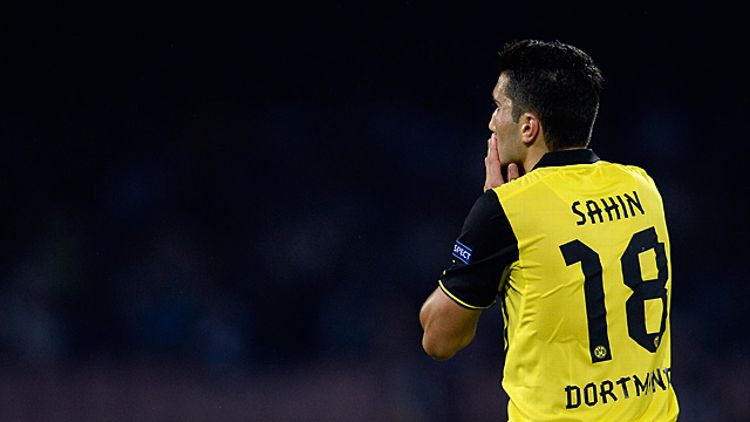 With the first round of Champions League group stage play came the first matchup of potential European champions: last year’s runner-up Borussia Dortmund versus Italian runner-up Napoli. Both of these teams have the quality required to make a run to Lisbon (home of this year’s Champions League final), but first they’ll have to emerge from a challenging group featuring Olympique de Marseille and a recently Mesut Ozil–infused Arsenal. So what did we learn about these two teams in their first European match of the season? Let’s take a look:

A Maddening First Half for Dortmund

It took only 45 minutes for Dortmund — second-place finishers in the Bundesliga and the Champions League last season — to find themselves down a goal, their goalkeeper, and their manager. The two critical moments that led to BVB’s unraveling — Gonzalo Higuain’s goal (and Jurgen Klopp’s subsequent dismissal) and goalkeeper Roman Weidenfeller’s dismissal — were both strangely the direct result of injuries to Dortmund defenders that were handled poorly by the team.

Dortmund center back Neven Subotic wasn’t even on the field for Napoli’s opening goal. The defender, who suffered a cut on his forehead, had been delayed returning to action. Forced to reenter during a Napoli corner, Subotic actually arrived seconds before Juan Camilo Zuniga’s cross came in. He was tasked with marking center back Miguel Britos, but Dortmund fullback Marcel Schmelzer lost Higuain in the shuffle. Higuain, who has brought his poaching ability over from Real Madrid, rose up and placed his header perfectly in the bottom corner. Within 25 minutes, Dortmund was down a goal, because they couldn’t keep all 11 men on the pitch for a set piece. How did Klopp feel about Subotic’s delayed reentrance?

Not good. He felt not good. Apparently you can’t make that face and continue to manage in the match; Klopp was sent off, booked for rattling the existential core of the fourth official.

The Dortmund manager’s absence would prove critical at the end of the first half, as a series of strange events ended with Dortmund down their goalkeeper and with only a single substitution remaining for the second half. Dortmund center back Mats Hummels suffered a muscle injury in his leg as he marked Higuain on another set piece late in the first half. Without a center back on the bench (new acquisition Sokratis Papastathopoulos was not on the bench), Dortmund interim boss Zeljko Buvac decided to make an aggressively positive switch, bringing on speedy attacker Pierre-Emerick Aubameyang.

Two touches after the sub was made, Napoli fired a long ball to Higuain, who had wriggled past Nuri Sahin and Sven Bender. Weidenfeller decided to break up the play by using his hands way too far from his own goal, which is apparently not allowed.

Weidenfeller saw red, Dortmund had to use another substitution to bring on reserve keeper Mitchell Langerak, and what was a tense tactical battle fell quickly into disarray. Napoli would score in the second half, and while a late own goal from the otherwise excellent Zuniga would bring Dortmund some life, they lacked the attacking impetus to create a real chance down the stretch. Despite the strangeness of this match, there was much to learn about how these two new-look sides will play, and whether they will contend for this year’s European title.

New Napoli manager Rafa Benitez, who famously won the Champions League while at Liverpool, has frequently professed the value of building out from the spine of his team. Going back to his time in Merseyside, this meant ensuring a team filled with quality holders and distributors in the midfield, buttressed by a star striker and dominant center back play. While he has many of the tools needed to construct a quality spine in Naples (Higuain, center back Raul Albiol, and Marek Hamsik are playing at a world class-level), it was the left flank of the Italian team that gave Dortmund fits.

Lorenzo Insigne was magical, both from open play and from set pieces. The 22-year-old midfielder’s overlap with fullback Zuniga generated the most passes for any duo in the match — 32-of-32 for the pair in total, 21 of which came in the first part of the second half. Insigne used that overlap to strong creative effect, completing 12 of his 14 pass attempts in the final third of the field. His accuracy, combined with Zuniga’s pace, made Napoli a constant threat down their flank.

Benitez has called for the attacking fullback to replace the traditional winger in the modern game, and seeing how advanced Zuniga played on the pitch, it’s clear that the Colombian wingback fits Benitez’s scheme perfectly. Insigne is capable of playing centrally, and his future may lie as a no. 10, but his partnership with Zuniga (and Hamsik’s current form) means he is most valuable to his side on the left.

Oh, and he did this:

In a round where Lionel Messi Messi’d, Ronaldo bagged a hat trick, and Schalke’s Julian Draxler saw his legend grow, it was Insigne, the smallest player in the Champions League this season, who had the goal of the round. Seriously, that is unsavable and almost killed Langerak. What does Klopp think of that goal and the young talent who produced it? Sadly, we’ll never know.

While Borussia Dortmund returns a majority of the team from last season’s Champions League final run, the side that played Napoli probably didn’t look like a European title–contending team to you.

While Kehl’s play is easily replaced by either Bender or Sahin, his experience was sorely missed when things went sideways for Dortmund on Wednesday. And Gundogan, well, he’s as close to irreplaceable a player as any player in Europe.

Additionally, Polish fullback Lukasz Piszczek’s absence forced Kevin Grosskreutz to play right back. This did not go well. Grosskreutz is a natural midfielder whose skill set is his industry rather than his tackling or pace; he was overmatched in his role in a way that Piszczek would not have been.

So, three major injuries, a dismissed manager, a strange substitution leading to a keeper seeing red. It is foolish to read too much into a single match under the best of circumstances, and, for Dortmund, these were pretty much the worst of circumstances. That said, the biggest challenge Dortmund is facing this season is replacing attacking midfielder Mario Gotze, now a member of Bayern Munich. (Along with every other young world-class midfielder. All of them are in Munich. If you think you saw a young world-class midfielder outside of Munich, you were mistaken.)

Dortmund’s two most talented midfielders, Marco Reus and new acquisition Henrikh Mkhitaryan, consistently occupied the same space on the pitch. And this wasn’t “occupy almost the same space and pass your way to victory” stuff. Reus and Mkhitaryan each only completed one pass to the other the entire match.

That Reus and Mkhitaryan aren’t linking up with their passing is not necessarily a problem for Dortmund going forward. These are two midfielders whose strength comes from their running, their ability to create space without the ball. In an ideal world they are creating space for each other with their movement, dragging defenders with them to open up channels in the defense that would otherwise not exist. However, if they are occupying the same space then they are actually closing space off for each other, dragging defenders into each others way. And regardless of the space they create, without a player like Gotze to pass the ball, neither player will get the distribution he needs.

Again, this is one match. One match played on the road, down a man, without a world-class midfielder, and without the presence of one of the world’s best managers on the touchline. It also came days after Dortmund annihilated Hamburg in the Bundesliga, putting on one of the best team performances of the season in any domestic league. But it’s also the first real test that the new-look Dortmund attack has faced this season (with apologies to Eintracht Frankfurt), and it failed. With the talent they have on hand, Dortmund are still favored to advance out of a challenging group, but if they hope to make another run through the Champions League knockout stages, or even more difficult, challenge Bayern for the Bundesliga title, their front four will need to start singing in harmony, and soon.