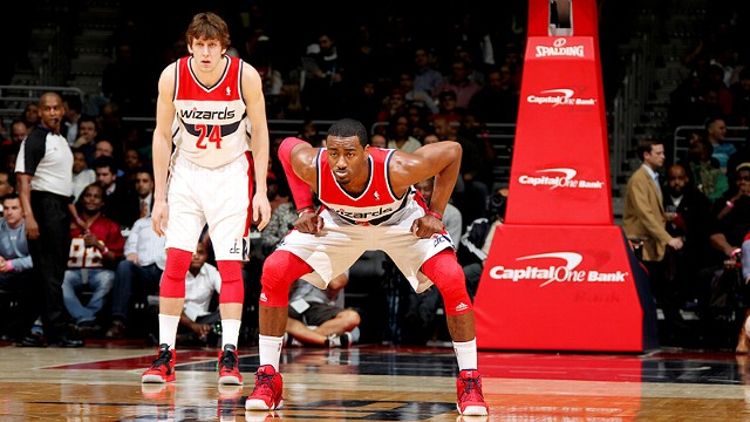 We knew it was coming. There was too much optimism from outsiders. Too many people predicting the playoffs, praising the offseason, everything. Of course someone would get hurt. Nothing good can happen to this team. It’s a law of the NBA universe.

And sure enough! The press release came Wednesday.

WASHINGTON, D.C. — Wizards President Ernie Grunfeld announced today that center Emeka Okafor will be out indefinitely after being diagnosed with a herniated C4 cervical disk. … After consulting with several specialists and the team doctors, Okafor will begin rehabilitation to reduce the inflammation and correct the injury. The herniated disc was originally revealed through an MRI after Okafor experienced discomfort in his neck.

On the scale of disturbing injuries, this is pretty far up there. Cervical disk is not a phrase any sports fan wants to be Googling a week before training camp starts. Said owner Ted Leonsis Wednesday, “We’re not sure of the gameplan here.”

Of course that’s what happened. You could go the rational route and note that a team building a nucleus around two aging big men with extensive injury histories isn’t completely sustainable. But this is the Wizards. It’s always been a combination of institutional incompetence AND cosmic forces working to torture D.C. basketball fans forever.

I freaked out when this news initially broke, because I’ve been a Wizards fan my whole life. Any bad news triggers flashbacks to everything else that’s happened to this franchise over the years. Almost exactly a year ago we found out John Wall had a “stress injury” and would miss two or three months. After rumblings of a playoff run all summer, that ended the season before it started. Somehow this stuff just keeps happening. This is why people saw the Okafor news — which came hours after we found out Chris Singleton is also out two months — and gawked at the cruelty.

What exactly did the Wizards do to piss off the basketball gods?

Whoever’s at fault, there’s a long history of suck with this team. Zach Lowe wrote 10,000 words celebrating Chris Webber’s Hall of Fame career this week. Remember when the Wizards traded him right before he turned into a superstar?

I’m not even upset about losing Okafor after thinking about it for a few hours. The greatest player in NBA history came to D.C., hijacked the franchise for three years, and inspired this scathing exposé from the Washington City Paper. The most adored player in the last 30 years of the franchise ruined his knee, signed a gigantic contract, ruined his knee forever by coming back too soon, and then brought guns to the locker room over a gambling dispute to put a finishing touch on the whole era. Our current owner refuses to pay the luxury tax and last year moved the local broadcast team 40 rows off the floor to make room for more courtside seats. Their no. 1 pick in 2001 is most famous for throwing a cake at someone. They paid tens of millions of dollars to JaVale McGee and Andray Blatche, and sold them as franchise cornerstones for multiple years.

It’s going to take more than an Emeka Okafor injury to make Wizards fans blink. Anyone who still cheers for this team is clearly immune to despair.

Besides, this isn’t as crippling as it seems. Okafor was great on defense — this Rob Mahoney piece does a great job of outlining his impact next to Nene — but if everyone else is as good as some people expected before this news hit, they should be fine. Let’s say Okafor misses 40 games. If that’s the difference between the Wizards getting swept in the first round as a 6-seed and the Wizards getting swept as an 8-seed, who really cares?

Likewise: If Nene or Wall gets hurt, the Wizards miss the playoffs and land in the best lottery in years, and it forces Ted Leonsis to finally get rid of Ernie Grunfeld and Randy Wittman? Even better!

TO WARD OFF PLANTAR FASCITIIS, NENE LET FERAL BRAZILIAN CATS GNAW OFF HE FEET. WILL STILL START AHEAD OF JAN VESELY.

Or maybe not. We’ll see.

For now, this is the Jan Vesely of franchises. Hapless, hopeless, and lovable in the sort of way you love a three-legged puppy. That’s the Wizards the past five years. But maybe this is the season when John Wall becomes the player everyone’s always hoped for, splits the earth in half, and gives them a new identity. If it seems like we’re bouncing between entrenched, passionate cynicism and blind optimism, well, that’s what being a fan of a horrible team is all about.

As far as Okafor’s C4 cervical disk, that won’t make or break anything. It was mostly just a glaring reminder of everything that’s been working against this team for the past 30 years. And also a reminder of why everyone should be rooting for the Wizards this year. People love underdogs, right? Well, forget the Pacers or Warriors. This is what a real underdog looks like. Where hope is really just an elaborate setup for more suffering, and somehow it happens every year.

That’s what Wall, Nene, Bradley Beal, and Otto Porter are up against this year and every year. History, luck, management, whatever. Everything is working against them. It’s the Wizards Against The World, always and forever. How can you not love them?

(This is the conversation I have with myself every single September.)