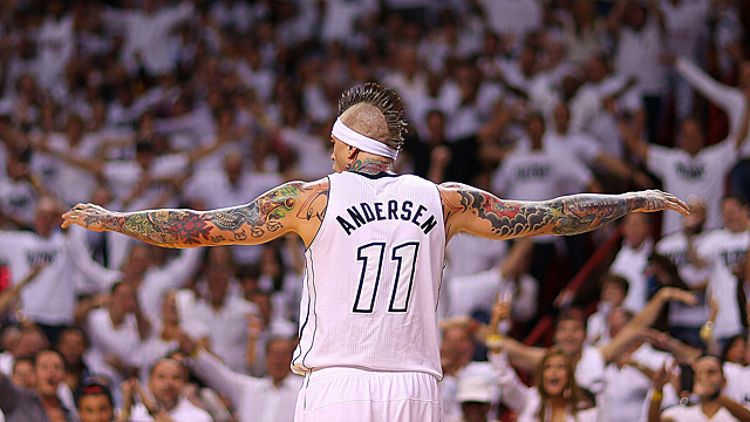 In the last 10 or 12 years, technology has evolved to the point that we can almost paper over the yawning soul-voids found within our earthbound flesh. Want to look at attractive people? You can do that. Want to look at attractive people having sex? Yes you can. Want to send a message to your favorite celebrity? Sure. Want to be your favorite celebrity? Well … there’s a few more steps involved, but you can do that too. From a cell phone, even.

So what does this have to do with Birdman? Let’s back up a bit: In May 2012, while Chris “Birdman” Andersen was with the Denver Nuggets, Douglas County Sheriff deputies searched his home. Because the deputies declined to provide information on the search and what might have spurred it, rumors naturally spread. What was known was that the deputies were looking for unknown evidence of Internet crimes against children. It goes without saying that “Internet,” “crimes,” and “children” are words that you never want to see together in a sentence; they are words that make a person an instant outcast.

Andersen released a statement through his attorneys, explaining that he had been in contact with a female fan on the Internet who had represented herself as 21 years of age, but was in fact younger. Racy photos were exchanged and, later, the contact between Andersen and the young lady became decidedly more biblical. According to Andersen’s lawyers, this interaction formed the core of what would eventually become a simple extortion scheme: Fork over cash and gifts or the young lady would go public.

“Mr. Andersen has been fully cooperating with the authorities,” said Andersen’s lawyer. “We are confident it will be shown that Chris did not engage in any criminal conduct.” The Nuggets excused Andersen from the team indefinitely that May and eventually cut him.

After sitting unclaimed for most of the 2012-13 season, Andersen would join Miami, helping them to its second consecutive NBA title, but the case still hung there, unresolved.

Well, yesterday Sports Illustrated’s Jon Wertheim gave us a more detailed view of the case. And, wow, it is craaaaaaaazy. From SI:

At some point during his tenure with the Nuggets, Andersen had a consensual sexual relationship with a woman from California. Though she had allegedly misrepresented her age to Andersen, he appears to have broken no laws in Colorado, where the statutory age of consent is 17.

Concurrent with that, Andersen was the victim of cyber identity theft at the hands of a different woman in Canada. The identity thief was able to access Andersen’s email, social media outlets, his phone, bank records, and even his video game console.

The woman believed that it was Andersen making the demands and felt increasingly threatened. Eventually she went to the authorities. The sexually suggestive threats triggered the investigation of the Internet Crimes Against Children unit. When [the] Douglas County Sheriff’s office executed its search warrant on Andersen’s home in Larkspur, Colorado, 40 miles south of Denver, police took his computer and other electronic equipment.

So, a hacker gains access to basically every piece of electronic equipment that Andersen owns that connects to the internet. (I mean, even the video game console!?!) Using that access, the hacker contacts the California woman pretending to be Birdman, somehow manipulating them into a sexual relationship. Presumably, it’s the alleged hacker who then, now pretending to be the California woman, tried to extort money from Andersen. Which, if true, makes this hacker the most diabolical catfisher ever. We’re talking the Danny Ocean of catfishing. The Manti Te’o incident seems a mundane story of loneliness and low self-esteem by comparison, an unrequited crush that simply went too far. Te’o wasn’t going to end up in prison; he was only going to end up a punch line.

The really scary part of all this? What if Birdman’s hacker was just a little bit better at her craft? What if she was like the anonymous hackers that compromised Wired senior writer Matt Honan’s Amazon, Gmail, AppleID, and Twitter account, remotely erasing his laptop and sending out racist tweets under his username. That’s a guy who writes about the Internet, computing, and gadgetry, is aware of the security issues that arise from our modern electronics ecosystem, and even he was hacked. All these little boxes of glass, metal, and plastic that we carry with us, that sit in our homes, are complex instruments of infinite wish fulfillment, and most of us have little idea about how they really work. If Andersen’s hacker had been a little more skillful, or if he was a person of less means, he might be sitting in a cell right now, talking that boy-who-cried-wolf refrain of the 21st century — “I was hacked” — while we RT his story with eye-roll GIFs.