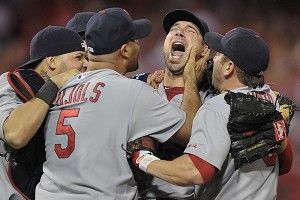 There are plenty of places you can read thoughtful or funny previews of the Major League Baseball playoffs. This is not one of them. If you read any of the epic preview pieces by Jonah Keri or Rany Jazayerli and thought, “Hmmm … good stuff. But I need this to be a lot more stupid and written by someone who has watched a total of seven innings of baseball this year,” then, man, you won the content lottery right here. Robert Mays and I are totally unqualified to talk about the national pastime. Honestly, I don’t even know if Mays knows the rules of the sport, in even the most basic way. So, obviously, let’s preview tonight’s play-in games. I got National League, Mays is on the American. Leave your frontal lobe at home, people.

So this is like Sophie’s Choice, except if Sophie wanted both of her kids to die. I’d seriously rather be the first-responder to Steve Blake’s El Segundo–rusty-spike-in-the-foot accident than see either of these sports franchises succeed any more than they have this year. I am a Phillies fan. I’ve got priors with both of these clubs. Anything good happening to either of these ballclubs gives me the dry heaves. Hey, speaking of dry heaves, remember when Cardinals pitcher Chris Carpenter pickled a piece of his own body and put it in a bathroom cabinet? For his daughter?

So on one hand you have the Red Birds, who defeated the Phillies in the NLCS last season because they allowed rabid beasts to roam around their ballpark and burrow holes into the ground, and Ryan Howard stepped in one of them and snapped his Achilles and that’s the only reason St. Louis won.

On the other hand, you’ve got Atlanta. I’m looking at their lineup and I know they’ve got some cool players like Jason Bourne and Jason Heyward, but I can’t help but get a real “I rock Mountain Dew Baja Blast promotional clothing” and “I got to Kevin Kolb’s chin barber” vibe from most of these guys. I wonder if Bobby Cox will take some time off from running the radio station from O Brother Where Art Thou to throw out the ceremonial first pitch.

If I had to go with my gut, I’d rather commit seppuku, but I guess I want the Nationals to beat whoever comes out of this Thunderdome. The Strasburgers went 10-8 against the Braves and 4-3 against the Cardinals. So I guess Braves? I feel bad because the entire time I’ve spent writing this post, Sarah Larimer has been sending me adorable Cards videos of Ozzie Smith doing gymnastics and horses running around. A more sentimental man would be moved by such ploys. But it’s like Chris Carpenter says, when it’s time for playoff baseball you put your body parts in a mason jar and shove it in the bathroom cabinet. Go Braves. — Chris Ryan

Apparently, things have changed. I guess the Rangers had a big lead in the AL West before blowing it to the A’s, whose roster, in the truest of Moneyball fashions, features exactly two players I’ve heard of. (Note: After some additional reporting, I can confirm that Stephen Drew is not a former Valparaiso basketball player.) The same goes for the Orioles. I know Matt Wieters because of that awesome site that has jokes about how Matt Wieters is the baseball Chuck Norris. I can only assume this sort of adulation means he is very good at hitting baseballs. And people who hurt animals. Don’t hurt animals, people of the Baltimore and D.C. metro areas. Matt Wieters will come for you. An apparent blow to the Orioles’ chances is the absence of right fielder Nick Markakis, whom I have also heard of. Markakis is really good at hitting doubles, but I would caution Orioles fans to not worry, because hitting doubles isn’t all that important. It’s pretty much the same as hitting a single and then stealing second base.

The Rangers guys, though, I know those guys. Texas had two guys with more than 100 RBIs, and Michael Young, despite recent struggles, remains one of the game’s best bunters. The last time I watched more than 10 baseball games in one season, when I was employed to do so by a reputable New England periodical, was when Adrian Beltre was staging what has since been deemed the “Adrian Beltre Cash Grab of 2010.” That summer, I saw Beltre hit not one, but TWO home runs off one knee. Several baseball “statistics” websites claim he hit 36 in total this year, which means I can guarantee at least one of them came with a knee in the dirt. In a format based much more on willpower and moral fortitude than random chance, Josh Hamilton is a role model for our nation’s youth and Beltre is one of the country’s leading voices in respecting personal space. Do you like people touching you? Me neither. Rangers, 7-3. — Robert Mays