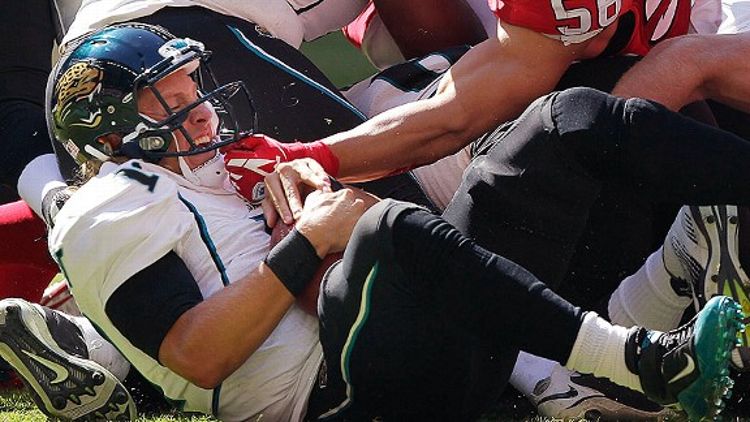 This week in football was so bizarre we all just need to get back to our regular lives for a few days to regain perspective. Tarvaris Jackson looked like Warren Moon, Drew Brees looked like Tarvaris Jackson, and the professional athlete who threw for the most touchdowns was Kevin Durant. It was refreshing to see Durant and the bros of Sigma Nu really embrace the lateral to advance the football. I have always suspected it could be more effective in the NFL. True offensive innovators, those Sigma Nu boys. I can’t wait to draft them next season in the Grantland Stillwater Oklahoma Intramural Football Special Teams Fantasy League.

There was one constant. Even in the oddest of weekends, you can count on a multiple-interception game from Blaine Gabbert. Let’s check in on “Yo Gabba” Gabbert and the rest of the BQBL’s MVPs this week.

Jacksonville Jaguars (Blaine Gabbert and Luke McCown), 62 points: Don’t let the Curtis TAINTer-ish hair fool you, Blaine Gabbert sounds kind of gangster when he curses. Whoa there, Blaine Gabbert! His use of the M-F bomb was two parts hick and one part hood, and he pulled it off pretty nicely. The same can’t be said about the rest of his performance against the Houston Texans. On Sunday, Gabbert had fewer passing yards than Reggie Bush had rushing yards. That is not a good sign for the Jaguars, but it’s a great sign for anyone who started Blaine and the Jags in the BQBL.

Gabbert competed 10 of 30 passes, only had 97 yards, and recorded two picks. In each of his last three games, Gabbert has not thrown for more than 109 yards or completed more than 12 passes. Matter of fact, if you combine the passing yards of Gabbert’s last three games, he is still 24 yards shy of Tarvaris Jackson’s performance from this Sunday.

Seattle Seahawks (Charlie Whitehurst and Tarvaris Jackson), 61 points: Was that really you, Tarvaris Jackson? Same team, same number, but there was something different … you didn’t suck. When Tarvaris entered the game after Charlie Whitehurst atrocioused his way around the field for a quarter and change, BQBLers were giddy. After all, he was coming in with a bum wing (pectoral injury) and without a full week of practice. Then weird happened. Tarvaris threw for 323 yards, had an over 50 percent completion rate, and only had one interception. Only one interception! Actually, if you look at his stats this year (I can’t believe I am saying this), they are not that bad. OK, I need to get back to making fun of people, so let’s move on to Tim Tebow.

1. Losing wasn’t a big deal. If you go to a devastating loss in Chicago or Philadelphia, by the end of the game, there is a an intimidating vibe around the stadium and you can physically feel the weight of the collective negativity. It is like being in a bar when you know a fight is about to break out. You just want to leave and make as little eye contact as possible on your way out. Denver was not like that. After the game people just hopped on their mountain bikes and kept the party going. One would think that this would be pleasant. It wasn’t. It was unsettling.
2. Marijuana and football mix in Denver. Dispensaries outside the stadium and joints burning inside the stadium. Now that I think about it, takeaway no. 1 might be directly related to takeaway no. 2.
3. The word “Tebow” is as versatile as the word “dude.” People would just look at you as you walked by and say “Tebow.” It was a greeting, it was a parting gift, it was a war cry. Before the game, people would yell “TEEEEEEBOW!” After the game, people would shrug their shoulders and say “Tebow?”
4. Strangers are very kind, happy to talk to you, and will offer you all kinds of stuff. No sir, I do not want a pot brownie. Thank you, but after the game, I have to work and I cannot go back to your house to grill venison. Oh, you made a documentary film? Cool, but I don’t have the time right now to screen it. What was that? French fries? Don’t mind if I do.
5. You should probably move there for at least a year. Learn to hunt. Learn to snowboard. Learn to rock climb. Learn to be nice to strangers. If you’ve just graduated college and you haven’t been able to find a job yet, just hop on a bus to Denver. Before you know it someone will hand you a pot brownie, some venison, and a few fries. Sure, you will have to watch a documentary film, but it’s cool, you’re young and into that sort of thing.

Washington Redskins (John Beck), 32 points: The Buffalo Bills had totaled four sacks this season, before they faced the Redskins on Sunday. They left with 13. If I were John Beck, after the eighth sack, I would have just started to point to my helmet, pretend there was a problem with the communication device in there, and change all the plays to running plays.

San Diego Chargers (Philip Rivers), 30 points: Oh, Philip, there you are on the sideline saying to yourself, “This is the worst day ever.” Stop being so dramatic. The Grantland staff went to the “Urban Legends” concert Friday, featuring K-Ci, JoJo, Ginuwine, and Blackstreet. No matter how bad you think your life is, Philip Rivers, you are way better off than a washed-up R&B singer. Crooning away to an apathetic crowd that only fills the place to 15 or 20 percent capacity was one of the more depressing entertainment events I have witnessed. Not like Doc Gooden on Celebrity Rehab depressing — more like Toddlers & Tiaras depressing. They didn’t even perform “All My Life.” It was likely not a creative choice. It was probably more like, they forgot the words, didn’t get paid what they were told they would, or they’d run out of things on the stage that they could air hump.

New Orleans Saints (Drew Brees), 30 points: Drew, I am just going to move on with my life and pretend you were never beaten by A.J. Feeley. Cool?

Indianapolis Colts (Curtis TAINTer), 22 points: Two picks, zero TAINTs for TAINTer this week. Do you know Curtis TAINTer only has four picks this season? I would have guessed a few dozen. Looking ahead, I have November 13 circled on the ol’ BQBL calendar. That’s when Blaine Gabbert comes to Indianapolis and that’s when the Colts get their first win, and that’s when I start calling him “Curtis Painter” again. It is getting kind of gross and weird to call him TAINTer.

St. Louis Rams (A.J. Feeley), 26 points: Again, I am just going to pretend this game never happened. Mentally processing the fact that A.J. Feeley and the Rams outplayed Drew Brees and the Saints throws everything off. It is like your sister having sex, or the amount of cream that went into your clam chowder: You know it happened, but you’re better off not thinking about it.