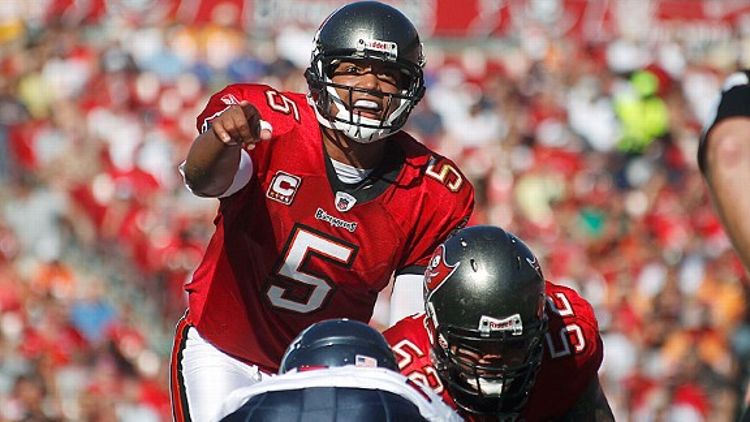 Can you please award Josh Freeman some 24/7 points for shooting himself in his throwing hand?

Jacoby: How is this not a bigger story? How did I walk the Earth for three days without knowing about this? Hey Josh Freeman, if you are getting “cosmetic stitches,” how about a “cosmetic haircut?” How does this even happen in the first place? I was under the impression that the only way to injure yourself at a gun range was to get shot by someone else or Plaxico yourself.

Okay, so another e-mail about the posterboy Andy Dalton. Do you think making him the posterboy for BQBL made him good — sort of like a reverse-Madden curse? If Madden featured a QB on its cover, would using the same QB as the BQBL posterboy cause the world to end?

Jacoby: Interesting question, Rono. I am going to go with “no.” If the BQBL and Madden shared a posterboy, the world would not cease to exist. I wanted to get to know Dalton, so I did a little Googling and found Grantland’s new Senior Andy Dalton correspondent, Linden. Linden thinks that Dalton never should gone to Cincinnati. She eats while she gives her analysis. I also learned that Dalton once saved a dog’s life. This Andy Dalton fella is really starting to grow on me. Who knew there was more to him than being a redhead?

So if you click the Ricky Stanzi link [in this week’s scorecard] … it takes you to ESPN. Tells you the normal stuff. He’s out of Iowa, 6-foot-4 inches tall, yada yada … But if you scroll down a little further on his ESPN page, you come across the most ridiculous stat ever. He is owned in .1 percent of fantasy leagues!!!! I wanna know who these .1 percent are … How desperate do you have to be to pick him up on the waiver wire? Are guys running BQBL Leagues on ESPN?

Jacoby: I noticed that as well. You have to figure that translates to about a hundred leagues. I am saying 30 of those people are Iowa grads that just like him being on their roster, 20 of them are Stanzi friends and family, another 20 just drafted him because he has a cool name, 15 of them liked his picture and 10 of them are keeper leagues. I have no explanation for the last five, aside from people who legitimately thought he would do well this season. That can’t be the case, right?