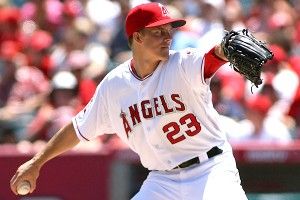 In acquiring Zack Greinke from the Brewers for three prospects, the Angels now have an argument for the best rotation in baseball. Better still, even if his first start ended in a 2-0 loss to the Rays, the Angels outfoxed their archrivals and improved their chances at a deep playoff run.

Greinke has reemerged as one of the four or five best pitchers in the game this year. Though his nine wins and 3.30 ERA don’t scream “ace,” every other stat points to Greinke returning to elite status in 2012. His 4.5 strikeout-to-walk rate ranks seventh among all starting pitchers. His career-high 53.7 ground-ball rate has fueled the fourth-lowest home-run rate, at 0.5 per 9 innings. And his 2.44 FIP tops all other starters.

Greinke joins Jered Weaver, C.J. Wilson, and Dan Haren to form one of the most dynamic front fours in the majors. By adding Greinke and gaining that depth, the Angels can use a quick hook with Ervin Santana, who’s been a gigantic disappointment all season, knowing the bullpen likely won’t be overtaxed when any of Santana’s rotation mates take the mound. That bullpen’s already much improved over its early-season version, after GM Jerry Dipoto snagged underrated Padres reliever Ernesto Frieri in early May; he’s struck out 52 batters in 30⅓ innings with a 1.19 ERA since then.

The Angels’ gain is the Rangers’ loss. Fox Sports’ Ken Rosenthal reported that Texas made a run at Greinke, too, but Milwaukee decided on the Angels’ offer instead, after Dipoto added right-handed pitching prospect Ariel Pena to a deal that already included talented, young shortstop Jean Segura and hard-throwing righty John Hellweg.

Meanwhile, the Brewers get an impressive haul for two months of Greinke. The 22-year-old Segura is a high-contact hitter with tons of speed and a bit of pop; he was hitting .294/.346/.404 with 33 steals at Double-A Arkansas before the trade, and projects as a plus defender. Hellweg, 23, posted some ugly numbers while also at Arkansas: 119⅔ innings pitched, 88 strikeouts, 60 walks, 13 batters hit by pitch, and 14 wild pitches. But Hellweg’s also a 6-foot-9 fire-breather who can dial his fastball into the mid-90s, giving him potential as a major league closer, or if he can improve his secondary pitches, an intriguing starter. Scouts aren’t as high on the 23-year-old Pena’s upside, but he did strike out nearly a batter an inning while also at Arkansas.

Nineteen months ago, Milwaukee gave up what turned out to be a king’s ransom for Greinke, with Alcides Escobar, Lorenzo Cain, Jake Odorizzi, and Jeremy Jeffress going to the Royals in the deal. Of course, that trade bought the Brewers two years of Greinke service time; this one buys two months, though with the additional benefit of an exclusive negotiating window for the Angels to potentially lock up Greinke with a contract extension. If Segura develops as expected and Hellweg and Pena pan out as big league starters, the package the Brewers got back might not be terribly far behind the one they dished out in the first place.